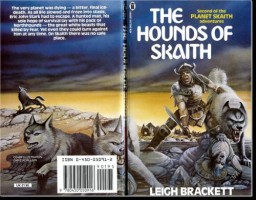 Five months after the book publication of The Ginger Star, The Hounds of Skaith was out in October 1974 from Ballantine Books. There was no magazine version this time.

The Hounds of Skaith came out at 182 pages, so almost the same length as The Ginger Star. Jim Steranko painted the cover specifically for this book. There is a story he had painted the illustration eventually used for The Ginger Star thought not with Eric John Stark specifically in mind. Leigh Brackett saw it and said that is how she imagined Stark.

The first novel had Stark as one man against a world. A senile world on the verge of madness. Skaith is a world headed towards eating itself, literally. The prophecy of the Dark Man gets in the way of Stark finding his foster father, Simon Ashton. That achieved along with destroying The Citadel, home of the supposed immortal Lords Protector, the stage is set for the next turn of the plot.

Brackett slips in some thoughts on the creeping tyranny of the welfare state:

“The Lords Protector were to prevent a too great trampling of the weak by the strong. Their law was simple: Succor the weak, feed the hungry, shelter the homeless–striving always toward the greatest good of the greatest number.
It appears that through the centuries this law has been carried far beyond its original intent. The Farers and the many smaller nonproductive fragments of this thoroughly fragmented culture are now the greater number, with the result that the Wandsmen, in the name of the Lords Protector, hold a third or more of the population in virtual slavery, to supply the rest.”

Stark travels south with Ashton with the thought of getting off planet before the Wandsmen shut off all extraterrestrial contact. He manages to rescue 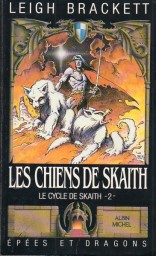 Gerrith and Halk from Gelmar the Wandsman. New cultures and creatures are introduced. Among them. Runners. They are humanoids that have transformed into a shape like a flightless predatory bird. Stark and the Northhounds wipe out bands of attacking Runners in their trek south.

Stark forges an alliance some semi-nomadic tribes who have on the receiving end of another tribe subsidized by the Wandsmen. He also gains allies with the Fallarin who have wings, but cannot fly well, but have control of wind.

“’I will go with you, Dark Man.’
Ildann cashed his fist on the table, ‘No!’
Sabak said, ‘I have a mind to see these ships, Father.’
‘Why? What do you want with other worlds? Have I not fought to bring you the best of this one? Yurunna, boy! We have taken Yurruna!’
‘And that is well, Father. I too fought. Now I with to see the ships.’
‘You’re a child,’ said Ildann, suddenly quiet. ‘Men must feed and breed wherever they are. One world or another, feeding and breeding are the most of a man’s life, along with the fighting that goes with them. No matter where you go, you’ll find nothing than what you have.”
“That may be, Father. But I will see for myself.’
Ildann turned on Stark, and Gerd, crouched by Stark’s feet, sprang up snarling.
“I see now why the Wandsmen with to kill you,” Ildann said. “You bring a poison with you. You have poisoned my son with dreams.’”

There are a total of three battles in The Hounds of Skaith. Stark’s alliance takes the Wandsmen stronghold of Yurunna taking in more Northhounds in the process. Stark is alerted of a Wandsman imprisoned for heresy for suggesting emigration from the planet would be a good thing. There is a rumor he may have a “transceiver” for communication with space going vessels.

A reconnaissance by Stark to the city of Ged Darod leads to a close call by two Children of Skaith-Our Mother sent to hunt him down. Lady Sanghalain smuggles Stark out of Ged Darod to Pedallon the heretic Wandsman. They make contact with a unscrupulous space trader/pirate, Penkawr-Che. Using a planet-hopper, a sort of shuttle, they travel to the city of Irnan, which is under siege. Stark, the Northhounds, and laser cannon break the siege and inflict a bad defeat on the Wandsmen. The fight is far from over as the Wandsmen will use professional mercenaries instead of hordes of Farers.