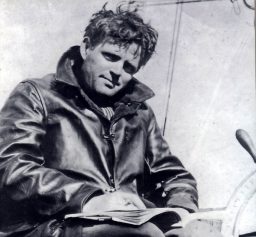 November 22 is a date that you generally hear about the death of President John F. Kennedy. You might read about C. S. Lewis dying on the same day once in a while. You never hear that Jack London died on November 22, 1916. This past week was the centenary of Jack London’s death.

Jack London (January 12, 1876- November 22, 1916) is an important author in the history of American literature. I view him as part of the era of classic writers that included Robert Louis Stevenson, H. Rider Haggard, Rudyard Kipling, Arthur Conan Doyle, H. G. Wells, and Edgar Rice Burroughs. Stuff that is the very foundation of our popular culture up onto recent times.

London’s writing career started in 1899 with appearances in The Overland Monthly and The Black Cat. In short order he was in The Atlantic, The National, McClure’s, Smart Set, Collier’s, and The Saturday Evening Post. He did occasionally pop up in pulp magazines including The Popular, Short Stories, and Top-Notch.

London wrote in a style of prose that one could think of as modern. It was muscular and direct. It was masculine. From “The Human Drift”:

“The history of civilisation is a history of wandering, sword in hand, in search of food. In the misty younger world we catch glimpses of phantom races, rising, slaying, finding food, building rude civilisations, decaying, falling under the swords of stronger hands, and passing utterly away. Man, like any other animal, has roved over the earth seeking what he might devour; and not romance and adventure, but the hunger-need, has urged him on his vast adventures.”

London did write some fantastic fiction. Some of it was early science fiction, other of it is just fantastic with no scientific rationale. Over the past 40 years, there have been some London collections of his fantastic and speculative fiction. Unfortunately, none of the seem to track all of his short stories in one place. His fantastic shorter fiction had a spurt of reprints in the middle 1970s. Curious Fragments (Kennikat Press, 1975, reprinted U. of Nebraska 1998) and The Science Fiction of Jack London (Gregg Press, 1975) have a lot of overlap. I picked up a trade paperback, The Science Fiction Stories of Jack London (Citadel Press, 1993) in 1994. Citadel Press mainly reprinted Philip K. Dick and some Robert Bloch. They did produce a similar collection of Rudyard Kipling’s “science fiction.”

“When the World was Young” has a man who is something more primitive at night:

“His other self he had located as a savage and a barbarian living under the primitive conditions of several thousand years before. But which self was he, and which was the other, he could never tell. For he was both selves, and both selves all the time. Very rarely indeed did it happen that one self did not know what the other was

“The Strength of the Strong” is a cave-man tale that satirizes what happens to those who want progress.

“The Red One” is a real classic. Set on the island of Guadalcanal in the Solomon Islands, a scientist hears of a god worshipped by the natives. The god is actually a giant red sphere that appears to be not of this earth. The story reminded me a little of H. P. Lovecraft’s “The Colour Out of Space.”

London had witnessed the Russo-Japanese War of 1905 as a correspondent. “War” (1911) is about warfare of that time. This reminds me of and predates Liam O’ Flaherty’s “The Sniper.”

“The Unparalleled Invasion”(1910) is very politically incorrect. London was a Socialist but that did not that appear to cross racial lines.

“China rejuvenescent! It was but a step to China rampant. She discovered a new pride in herself and a will of her own…The real danger lay in the fecundity of her loins…. The process was simple. First came the Chinese immigration (or, rather, it was already there, having come there slowly and insidiously during the previous years). Next came the clash of militia-soldiers, followed by their families and household baggage. And finally came their settling down as colonists in the conquered territory.”

The Western (and some Eastern) powers wage war dropping small glass vials from airships filled with a multitude of infectious diseases. China is later colonized by Europeans. 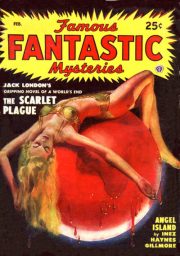 “The Scarlet Plague” (1912) is a tale of the inverse of the collapse of civilization due to a plague. An old man tells his grandsons about the previous life. They don’t believe him.

There are three Jack London novels of interest.

Before Adam (1907) is a cave man novel of sorts or rather a tale of approaching-man. An interesting plot item is a more primitive ape like being “Red-Eye” who terrorizes the cave people. 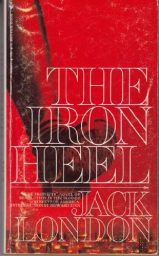 The Iron Heel (1908) is a tale of class warfare. The Oligarchy has taken control of the United States with most of the population in the labor caste. The system is authoritarian if not totalitarian. The First Revolt from 1912-1932 fails. There is a Second Revolt a few hundred years later that is successful instituting a new era known as the Brotherhood of Man. This novel was supposedly a big influence on George Orwell’s 1984.

Robert E. Howard said in a letter to Harold Preece in 1930: “London’s The Star Rover is a book that I’ve read and re-read for years, and that generally goes to my head like wine.” One can see why. Howard’s “James Allison” series is heavily influenced by Jack London. The Star Rover is told in first person by Darrell Standing, a university professor in prison for murder. He is repeatedly put in “the jacket” to break his spirit. He zones out and experiences past lives.

“I have lain in the long trances of the jacket and glimpsed myself a thousand living men living the thousand lives that are themselves the history of the human man climbing upward through the ages.

Ah, what royal memories are mine as I flutter through the aeons of the long ago. In single jacket trances I have lived the many lives involved in the thousand-year-long odysseys of the early drifts of men. Heavens, before I was of the flaxen-haired AEsir, who dwelt in Asgard, and before I was of the red-haired Vanir, who dwelt in Vanaheim, long before those times I have memories (living memories) of earlier drifts, when, like thistledown before the breeze, we drifted south before the face of the descending polar ice cap.

I have died of frost and famine, fight and flood. I have picked berries on the bleak backbone of the world, and I have dug roots to eat from fat-soiled fens and meadows. I have scratched the reindeer’s semblance and the semblance of the hairy mammoth on ivory tusks gotten of the chase and on the rock walls of cave shelters when the winter storms moaned outside. I have cracked marrow bones on the sites of kingly cities that had perished centuries before my time or that were destined to be built centuries after my passing. And I have left the bones of my transient carcasses in pond bottoms, and glacial gravels, and asphalt lakes.

I have lived through the ages known today among the scientists as the Paleolithic, the Neolithic, and the Bronze. I remember when with our domesticated wolves we herded our reindeer to pasture on the north shores of the Mediterranean where now are France and Italy and Spain. This was before the ice sheet melted backward toward the pole. Many processions of the equinoxes have I lived through and died in, my reader, . . . only that I remember and that you do not… And on the great drift, southward and eastward under the burning sun that perished all descendants of the houses of Asgard and Vanaheim that took part in it.”

If I were to put this paragraph in front of you without telling you the author, your response would probably be “Oh, this is Robert E. Howard.”

Reading prose like this makes you want to go out, make a club, and try it out on the first person who gives you a dirty look. 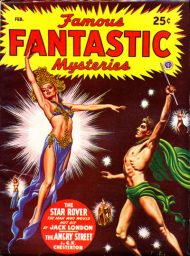 With Jack London, you get the beginning of hard-boiled prose. You would not have Dashiell Hammett or Mickey Spillane if London did not create it. He led the way from emo Victorian prose to something sharper and shorter in execution.

There are three books of fantastic Jack London from Leonaur Books. Each collects one of the novels and some short stories. All of his fiction can be found online to read if you want to sample him first.

Jack London died at age 40. As writer David C. Smith said to me once, Jack London wore his body out with hard living.

Robert E. Howard had this to say about Jack London:

“Yet a man’s mind must strive after GREATNESS and when he has progressed to the point where no commonplace human thought is really great in scope consistently, he must look beyond the human and if he finds nothing there – Jack London died because he could not untwine the Human from the Cosmic.”