The King in Yellow: The Mask 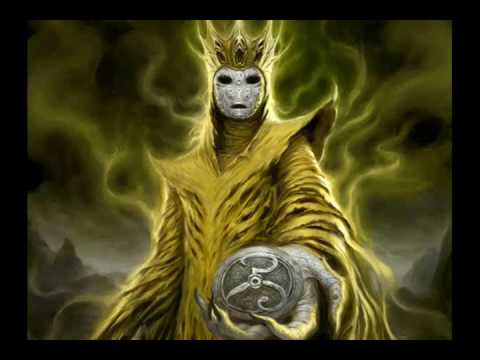 The yellow ribbon binding the eponymous collection by Robert W. Chambers together, the play known as The King in Yellow is infamous for causing madness among its readers, performers, and audiences. But what other horrible secrets lay in its pages, waiting for the unsuspecting student?

For that, we must go to Paris, to the time before the French confiscated the copies, to the story of “The Mask.” Boris, a renowned sculptor, reveals to his friend Alec the existence of a new chemical that can turn living flesh into exquisite marble stone. Suspicion sets in early, as an uneasy tie between the chemical’s effects and Boris’s sculptures can be made. But suspicion turns to dread as soon as Genevieve enters the conversation. No matter how many declarations by Boris that the formula will die with him, the idea that the next time that Genevieve may sit as a model for sculpture might be her last persists. Worse still, her doom might be accidental.

In truth, the excellent audio performance of “The Mask” by HorrorBabble, hammers this dread home harder than a perusal of the text. But there is no doubt that, from this innocent start, something more sinister shall grow. All from an obsession with the chemical processes of fossilization, mixed with a dash of the ancient and mysterious art of alchemy. But Boris is a sculptor, not a fussy chemist, and so leaves large quantities of his petrification formula out and open.

Enter The King in Yellow. For as soon as Alec stumbles across the book in Boris’s possession, Genevieve is caught up in a fit and a fever. In its course, she declares her love for Alec, who she rejected two years prior. That night, Alec falls prey to the same illness. During that time, all he can recall is an allusion to the Pallid Mask, a character alluded to in an excerpt before the story. Soon, his mind is swept up with images of marble creatures, of the King in Yellow and Carcosa, the Hyades and Hastur. Alec describes a fit of faraway visions with the vividness of Clark Ashton Smith, and the imagery and symbolism of the mask of self-deception link the petrification formula to the play.

When Alec awakes, Genevieve and Boris are dead. Of petrification and suicide, respectively. Out of caution, a friend of all three has disposed of the petrification fluid and burned Boris’s notes. Shattered, Alec spends two years wandering the East, until he returns to the parlor once more. Boris’s experiments are depetrifying…

“The Mask” is a strange inversion of “Rappacini’s Daughter” and other poisoned garden tales, perhaps even a continuation, For where the strange concoctions of science doom the love of Rappacini’s daughter, the same does so for Boris’s love of Genevieve. Yet Alec, already rejected, is reunited with Genevieve through the expiration of the same concoction that doomed Boris. But the danger does not lie in the misuse of exotic chemistry as in Rappacini, but through whatever madness in The King in Yellow that inspired. It is a surprise, however, that this tale of strange and deadly science actually ended on a happy note.

The Gothic fingerprints are all over, with a penchant for correspondence and travels fitting the genre. If the beginning started a bit mundane and unfanciful, hinting at a hard science fiction of the chemical variety, it was to let the madness of Carcosa shimmer as brightly as the exquisitely detailed statues. And science itself becomes as dark and dangerous as any of the other unknown arts that wreak terror on the Gothic protagonists. As such, “The Mask” deserves a slow read. Even the most innocent of exchanges hides portents, and not all madnesses are harbingers of destruction.

Even now, I still grapple with passages and elements of the story, only to see fine details and constructions, like a living man turned to marble.