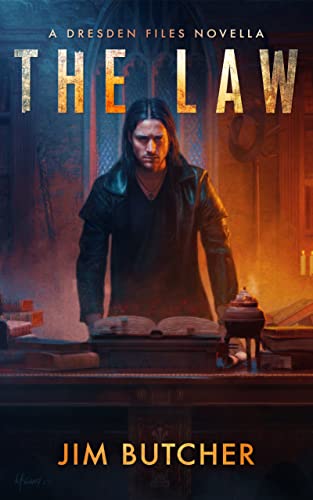 Months after the fight with the Last Titan, Harry Dresden is nursing the spiritual and emotional wounds from that near apocalypse. Maya, a reformed prostitute turned charity worker, comes to his door, seeking a private investigator to help her escape the attention of her former pimp, who is threatening to sue her for the charity’s money. Dresden takes the case, thinking that he might be able to do some normal, non-magical good for once.

He did not count on the pimp’s lawyer having connections to the faes’ Winter Court. Even worse, the pimp is a loyal soldier for underworld boss John Marcone, a man even the supernatural have learned to fear. Caught between matters of what’s right, what’s custom, and what’s owed, Dresden searches for a way to extract Maya from the impending lawsuit.

And then someone sics a rampaging spirit bear on Dresden…

It’s been a while since I’ve kept current with The Dresden Files, so finding a self-published novella from Jim Butcher was a pleasant surprise. I just didn’t expect to have missed out on another status quo-changing book like Changes. This isn’t to say that The Law does not stand on its own–it most certainly does–but that there are massive spoilers if you missed the last couple books published during the height of COVID.

Strip away the supernatural from The Law, and what’s underneath is classic Black Mask–a hard-boiled detective thriller that relies on a detective’s ability to navigate the streets and the ivory towers. As Dresden is by temperament and interest a geek, his voice often runs counter to genre conventions. It takes a little while to warm up to him after a diet of Hammett, Daly, and Whitfield. That tension does pass, about a third of the way through, however.

Dresden’s efforts to help Maya are handicapped by the iron bands of custom and agreement. Let’s call it what it really is, by the Law. Maybe not by US Code, but the Law nonetheless. Dresden has to exploit the difference between the spirit and the letter of the law in a realm where the rules-lawyering common to many systems fantasies would usher in greater disasters than a Titan shredding Chicago. (Most systems fantasies and litRPGs forget that rule-breaking is not the sole privilege of the hero.) He finds himself increasingly backed into a corner by competent foes in the legal and magic realms, and must rely on thorough investigation to find new avenues to help Maya.

But his foes aren’t without compassion. Bound as they are to retaliate in various legal, magical, and criminal ways, they still manage give Dresden leads to investigate. Everyone in The Law may be bound by a system of laws and alliances, but if certain facts are revealed, everyone gains more wriggle room. Oblique help is still help.

And then the Gordian Knot gets cut in one act of frustration, providing some much needed action in a story that has been building upon Dresden’s frustration and desperation. It may be a bit too convenient, but it does fit in the genre conventions, both of fantasy and mystery.

The Law is a cozy little almost-standalone magical noir for fans of kitchen-sink urban fantasy and detective tales. It is a great opportunity to enter the world of the Dresden Files while still appealing to the long series’ fans.