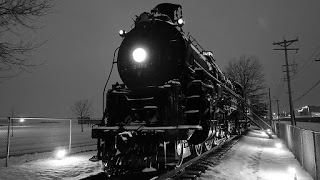 “Only thing is,” the mouth-harp man went on, “folks say the train runs on that track. Or it did. A black train runs some nights at midnight, they say, and when it runs a sinner dies.”

While out on a walk, John the Balladeer is pulled into an outdoor party and asked to play. It’s a strange celebration, for it marks the last day of a curse on Donie Carawan, a women tending towards her forties who inherited a small fortune. The reason for the curse is as follows:

“Folks reckoned that Donie Carawan decided against Trevis and love-talked Cobb into the killing; for Trevis had made a will and heired her all his money and property— the railroad and all. But Cobb made confession. Said Donie had no part in it. The law let her go, and killed Cobb in the electric chair, down at the state capital.”

“She was no witch,” he broke me off, “but she cursed Donie Carawan, that the train that Cobb had engine-drove, and Trevis had heired to her, would be her death and destruction. Donie laughed. You’ve heard her laugh. And folks started the song, the black train song.”

In contempt of the curse, Donie teaches the black train song to John. But, later, when John sings it, they both can hear a train coming an see ghostly tracks. Then, at midnight, the train comes…

This is not the first of Wellman’s stories to lean heavily on music for the plot. In “Nine Yards of Other Cloth” and “Can These Bones Live?”, John relies on the folk magic in folk music to carry him through his harrowing experiences. And “Vandy, Vandy” incorporates lyrics that Wellman himself wrote, a particular favorite of his that he would perform for friends. These rely on lyrical cleverness and a bit of Pennsylvania-Dutch folk magic. “The Little Black Train” adds pitch and rhythm to that well established formula to call on its curse.

The key concept of “The Little Black Train” lies in a piece of musicality lost in this age of overproduced electrical instruments and drum machines. Roots music, including the family of styles descended from the blues, often used the rhythms of the world around them in their music. At first, this might be the clop-clop-clop of a horse’s hooves, the rainfall clatter of falling chains, or the hammer fall of iron on an anvil. But as the iron horses ran across America on tracks of steel, the train with its relentless shuffle and distinctive whistle quickly became the preferred rhythm. Take a listen to Joe Bonamassa’s “Slow Train Coming” and hear how only a handful of instruments can mimic the rousing rhythm of the train:

Wellman’s unique take on this lies in the modulation of key combined with the musician’s tendency to continually speed up when playing. He explains it through the use of the Doppler shift, where objects coming closer to a listener have a higher pitch than retreating objects. Add a slow increase in pace and a slight crescendo, such as what tends to happen when bands get into the songs they play, and it is easy for even a small band, say that of a guitar and harmonica, to sound like a train speeding towards you. It’s a clever bit of science in fiction–or scientifiction as Hugo Gernsback would call it–which crosses over into Weird Tales territory when it meets the ghost story behind Donie’s curse.

But its with the curse itself that Wellman departs from the conventions of his Weird Tales work. Once again, the proud are laid low and sins find out their sinner, but unlike in “Laroes Catch Meddlers”, where the thieves are led to their destruction at the hands of a Confederate mummy, Donie repents of her machinations and the cursed train leaves her. Judgment is replaced by mercy. And if the criminal excesses of Prohibition spawned a deep cry for justice that seeped from the pulps, Wellman in the 1950s had a strong theme of repentance and redemption. Perhaps enough blood had been spilled in the wars between the two times, perhaps the spectre of Mutually Assured Destruction gave cause to blunt the tyranny of law, or, more likely, that the beliefs and legends of the Appalachian people demanded that the Gospel be treated with the same reverence as their folk tales. For horrors exist in the backwoods hollows, but so does hope, given by the only Man ever to be exactly six feet tall. Of Him, John would speak in another story.

As is now common in John the Balladeer’s stories, another woman rebounds off of John’s armor. Ever since leaving at the end of “Vandy, Vandy”, women have been trying harder to catch his eye. One has used love magic to salve her pride wounded after John’s refusal to notice her. Donie tried sex appeal. None worked. John is trying to live up to the virtue of previous men with his name, and, at least for the moment, he’s an outright bum magnet, attracting a number of Proverbs 7 gals whose beauty often hides self-destructive character flaws. And, since bad company often drives out good character, John does not stay with them. It is a refreshing change of pace to read stories where women are given enough actual moral agency to chose to be evil instead of just misunderstood or tricked into their deeds.