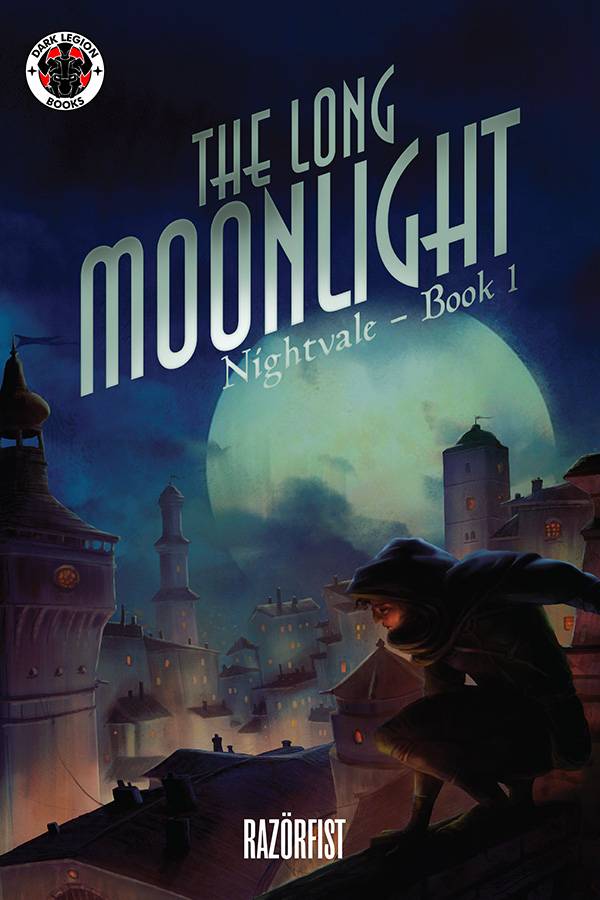 “The thing that rose to its feet was no longer Xerdes, Menuvian outlaw.

“It was no longer a man at all.

“What emerged was an instrument of inviolate vengeance.” – Razorfist, The Long Moonlight

During a second-floor job in Menuvia’s richer districts, professional thief Xerdes overhears the name of a man he once watched die. He soon finds himself drafted into an underworld power struggle threating to burn down the city of Menuvia. But when the web of double-crosses cuts too close to home, Xerdes might be the one to light the match.

Thief: the Dark Project meets The Shadow in YouTube and Unauthorized.tv commentator Razorfist’s first pulp fantasy noir. The result, The Long Moonlight, reads as a best parts digest of the adventures of fantasy thieves such as Locke Lamora, but, at a slim 115 pages, without the expositional padding those require to reach epic fantasy doorstopper length.

As a proper thief, Xerdes is not above violence when needed, he holds to the idea that a professional should avoid the messiness. Unfortunately, messiness comes to Xerdes’s door in the guise of Saryss, a skilled mercenary swordswoman from the north who becomes Xerdes’s partner in crime–and in bed. Their romance is slow, deliberate, and comfortable, until it ends abruptly with Saryss’s death. At that point, Xerdes becomes something more than the lone survivor of a exceptionally talented thieving crew. An instrument of inviolate vengeance he might become, but Xerdes is more James Bond than the Shadow that continuously swirls about him. He can still be rash, make mistakes, yet press home his plans and his blade with fury and precision. And yet Xerdes joins the recent resurgence of the indirect approach, taking his vengeance in part from setting his targets’ greed and desires against themselves. After all, the poison rotting inside a crime lord does not have to be physical, and a thrashing overreation can be as deadly as a dagger. Will Xerdes’s vengeance taste of honey or of ash?

Among his many projects, Razorfist is the host of The Shadowcast, a podcast devoted to Walter Gibson’s best known crime fighter. And the foggy, shadowing atmosphere of Gibson lingers over each page. But Razorfist is not copying the prolific pulp master’s style. He fills each page with the rapid-fire wordplay that fills each of his videos, just without the sardonic bite and endless stream of cultural references. Rhythm, rhyme, alliteration; all are used to craft a distinct voice in narration. Sometimes, there is a misstep in the attempt, but the departure from the thin gruel of contemporary transparent prose is much appreciated. And, in the tradition of the pulps, bring a dictionary. The eloquent prose occasionally unearths words so rare that they might be pearls. Unlike the thieves’ tales of The Lies of Locke Lamora, The Long Moonlight is written with an ear for the spoken word, and needs to be listened to in order to catch the full effect of the wordplay. Fortunately, an audiobook is in the works.

But don’t sleep on the paperback. From the first splash page to the consistent illustrations throughout, The Long Moonlight plays to the strengths of the printed word. The crosshatched shadows are drawn around the text in a way that lets illustration and prose heighten each other in a layout that an ebook cannot readily mimic. Razorfist also relies on Terry Pratchett-style footnotes to tuck away little bit of exposition and worldbuilding. This allows him to keep the story lean and free from digression, as explanations for the various styles and countries are an optional flick of the eyes to the bottom of the pages. And again, the printed word minimizes this interruption in a way that the loading of ebooks hyperlinks cannot. The Long Moonlight is a master’s piece of print design that makes it’s paper versions the definitive version to read.

The Long Moonlight is a strong freshman effort, marrying visual design to elocution to create a bloody tale of vengeance among the shadows. And readers can expect more from Xerdes and Razorfist with two sequels, The Ghost Wind and The Faceless Phantom in the works