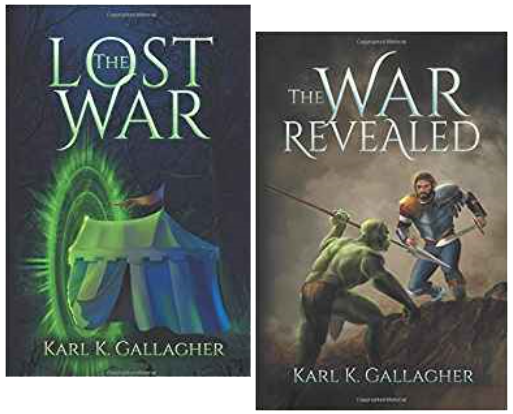 Friend of the blog, Karl K. Gallagher, best known for his Torchship trilogy of hard sci-fi novels (previously reviewed here), took a swing at the fantasy genre fastball this spring with the release of his Lost War duopoly.  The result is a solid, stand-up triple with much to recommend it.  It’s a wild blend of fantasy and modern adventure in the vein of “Lord of the Flies” meets “Lord of the Rings” with a dash of “Door Into Summer” thrown into the mix.

The core concept of a large troupe of medieval re-enactors whose weekend LARP takes a savage turn makes for a great hook.  The local witch decides that it might be fun to dabble with dark powers, and lurches the entire camp across the nameless void to land in the heart of an actual fantasy world complete with evil sorcerers and tribes of feral orcs.  The initial shock and slow exploration of the new world causes considerable friction among the castaways, and they barely have the time and cohesion to come to grips with the challenges of ironing out the workings of a stable society amid the wilds, building the infrastructure necessary to survive over the long term, and raising the defenses necessary to keep the local wildlife at bay.  Just as it looks like they might make a solid run at survival, the first significant orc attack hits them with the sharp shock of a prison shank.And that analogy is appropriate given what the orcs have in mind for the villagers.  Gallagher’s orcs are no men-in-green-masks, honorable warriors with a culture all their own.  These feral creatures are stone-age savages motivated by survival needs of their own, base needs that present a zero-sum game where co-existence is made impossible.  They are brutal and scary, and the stakes of the tale are suitably tangible and well defined.

Among their numbers are combat veterans, and their untraditional hobby of recreating medieval combat, means they aren’t as wholly helpless as they might otherwise have been.  As is typical of all human endeavors, political in-fighting rears its ugly head, complicating matters, and lending a grounding to a story that might otherwise lack serious weight.  And its here that Gallagher falls just a little shy of the home run mark.  While the set-up, characters, and plot clip along at a solid pace, there are times when Gallagher plays his cards just a little too close to his chest.

The characters have a depth out of proportion to the broad strokes with which they are painted, and the narrative point of view jumps back and forth among them with a free-wheeling attitude that makes it hard to get a solid handle on the story.  The challenges are presented in stark terms, and the characters rise or fall to them as fate and ability determine.  Casual mention is made of the emotional impact, but mainly as it relates to minor characters or in ‘off-screen’ events.  Spending more time inside the heads of characters as they wrestle with the terms of the savage new world would have helped add weight to the story.

Stories like this put the modern reader into the shoes of characters thrust into a starker and simpler world than our own.  As such, they inspire the obvious questions of, “How would I react to this?  How would I rise to these challenges?  Would I act with more wisdom and courage than these characters?”  Consider William Forstchen’s The Lost Regiment which drops a Civil War era regiment onto a medieval world populated by ten foot tall alien Mongol hordes.  The engineering challenges rub elbows with the clash of cultures and the internal struggles of the Regiment’s leadership, and all of the time the characters spend grappling with the situation adds a weight that The Lost War lacks.  We know Gallagher is capable of infusing stories with those little details, the complicated motivations, and internal struggles, as all of those touches make Torchship one of the better hard-sci-fi series of recent vintage.

Instead of smashing a well rounded classic, Gallagher delivers a fast and fun novel that gives the reader a taste of adventure with a satisfyingly vague conclusion.  Most of the loose ends are tied up by the end, with the reasons for the cross-planar travel fully laid out, the villains explained and dealt with, and an epic final battle that earns this The Lost War a solid recommendation for anyone up for a nice, light read.