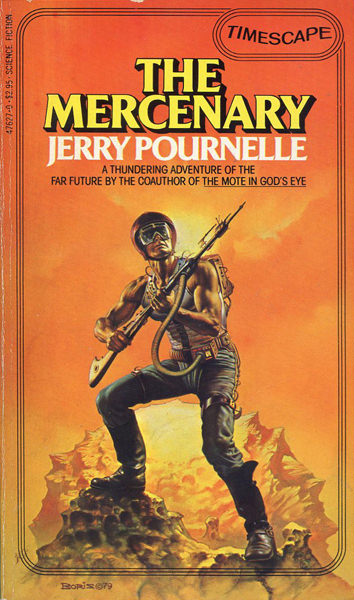 I had read Jerry Pournelle’s The Mercenary in the late 1980s and remember liking it. I had read the first two books in the Janissaries series. Enjoying those, I picked The Mercenary used with the Boris Vallejo cover from Timescape/Pocket Books (1983 edition).

This book takes place starting around 2060 or so in Pournelle’s future history of the CoDominium. The CoDominium is the result of a series of treaties between the U.S. and the Soviet Union in 1990. The French Foreign Legion is the basis of the CoDominium Armed Services.

A method of propulsion (the Alderson Drive) allows ships to leave the solar system in 2008. At the same time military research and development is outlawed by the CoDominium. Colonization of other solar systems starts in 2020.  Nationalistic revival movements at 2060 doom the CoDominium.

The prologue has a young John Christian Falkenberg joining the CoDominium Navy, almost getting shanghaied in a colonization ship full of welfare 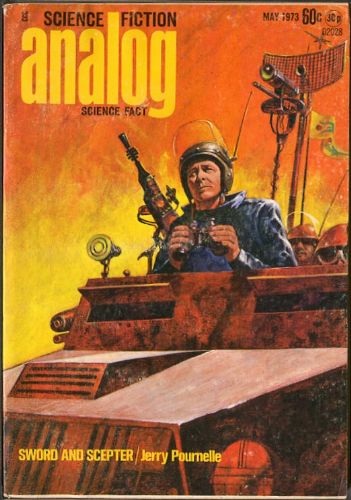 Twenty-seven years later, the CoDominum Armed Forces are under the axe for budget cuts. Pournelle has some scenes of the dirty underside of politics and budgets.

Falkenberg is introduced as a freelance mercenary in 2087 on the planet Hadley. He is to build an army as the planet gains independence. The problem is a large population of welfare recipients dumped on the planet from Earth who want government checks and goodies. This portion of the novel is about training an army from a small cadre brought by Falkenberg including a demobilized battalion of CoDominium Marines. Pournelle uses the Nike revolt against the Byzantine Emperor Justinian with Falkenberg taking the part of Belisarius this time.

The last portion of the novel has Falkenberg’s Legion hired to free a planet recently conquered by a neighbor colony planet in the same solar system. There is a battle against mercenary units, one of Scot’s infantry and German armor. The battle is based on an actual battle from the Korean War. Because there has been no military innovation for almost a hundred years, the weaponry and fighting are very late 1960s-early 1970s. Lots of armored thrusts and artillery strikes.

It was a surprise rereading this book on how little I remembered. I remembered the battle from the last section but not in detail.

Pournelle’s future history got messed up with the collapse of the Soviet Union though the CoDominium could be looked at any sort of globalist entity.

The Falkenberg stories are one of the foundational series in military science fiction. They are a little more believable than Dickson’s Dorsai who are just a little too much supermen for my taste.

The Mercenary was later incorporated with West of Honor as Falkenberg’s Legion by Baen in 1990 with more material added. I have not read that version. My reread consisted of the first Pocket Book edition from 1977.

Pournelle’s observations on politicians and bureaucrats have not lost any relevance today. 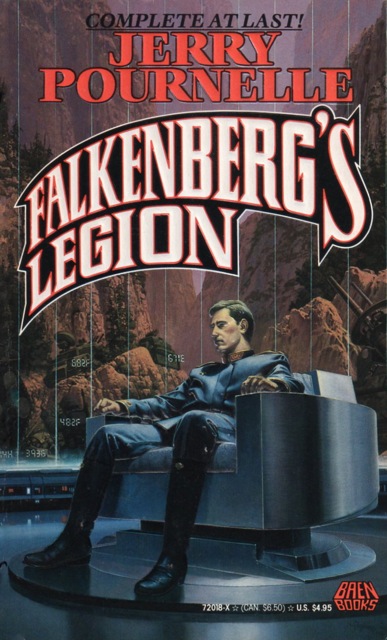