In the early 1980s, if you were new to the sword and sorcery genre, you could go to your local chain bookstore, generally B. Dalton or Walden Books and get the core library in short order. Robert E. Howard’s Conan, Fritz Leiber’s Fafhrd and the Gray Mouser, Michael Moorcock’s Elric were all there. There was a period around 1983 that you could get Karl Edward Wagner’s Kane books, C. L. Moore’s Jirel of Joiry, and Timescape editions of Clark Ashton Smith. Sword and sorcery in paperback form went back to 1966 with the Lancer editions of Conan. There was a post-Conan sword and sorcery boom in the late 1960s where you had Brak, Thongor, Kothar with eye catching covers painted by Frank Frazetta or Jeff Jones. That died out around 1971.

There was a second boom in the late 1970s fueled by Zebra Books reissues of Robert E. Howard non-Conan material and Berkley Medallion issuing of nine collections and one novel and another six reissues of previous Zebra paperbacks with new covers. All this created a coat tails effect with new sword and sorcery novels and anthologies published. Many of them were bad. Some of the books were really science fiction disguised to look like sword and sorcery. The minor publishers such as Manor, Zebra, and Tower were looking for anything to slap a barbarian with a sword on the cover. Those publishers were gone in the early 80s leaving Ace, D.A.W., Bantam, Del Rey, and the new Tor Books as the main publishers.

Ace Books did a lot of classic reprints of Fritz Leiber, the twelve volumes Conan set, Andre Norton. You didn’t see much in the way of stand alone novels but rather series from Andrew Offutt or eventually Steven Brust. D.A.W. Books always seemed to love sword and planet more than sword and sorcery fiction though the genre was well represented in The Year’s Best Fantasy under Lin Carter. Dell Books published a small but steady number of sword and sorcery paperbacks but publishing mainly media tie in novels after 1982. Tor was a science fiction imprint, it might thrown in a Poul Anderson collection of his fantasy stories but was not publishing any sword and sorcery at this time. Signet was the domain of Robert Adams’ Horseclans books, those appeared to suck the proverbial oxygen out of room allowing no competition within the publisher. Berkley had one of the best sword and sorcery lists in the late 70s reprinting Michael Moorcock, Robert E. Howard, and even Norvell Page. The very interesting Dark Border books by Paul Edwin Zimmer came out in 1982 alongside Glen Cook’s early Dread Empire novels. 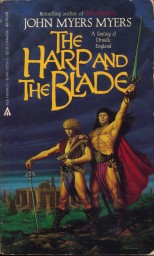 One of the last in early 1985, actually an historical novel that gets on the border of sword and sorcery.

Del Rey was the science fiction and fantasy division of Ballantine Books. Started in 1977, it struck upon the idea of publishing derivative fantasy novels by unknown authors with an emphasis on Tolkienesque packaging. Darrell K. Sweet and to a lesser degree, the Brothers Hildebrandt were the house artists. Terry Brooks, Stephen R. Donaldson, and David Eddings were big sellers for Del Rey Books. A fair number of the Ballantine Adult Fantasy titles were reprinted with new covers. About the only pulp sword and sorcery that Del Rey published was L. Sprague de Camp’s The Tritonian Ring. Berkley and Ace were bought by the same publishing corporation and the Berkley imprint phased out. Zebra’s science fiction and fantasy was scaled back by 1983.

At the same time the numbers of publishers shrank, you had a change in science fiction publishing. For decades, classic titles were kept in print. The idea was to sell smaller but steady numbers of your Heinlein, Arthur C. Clarke, Isaac Asimov etc. Titles were allowed to lapse. A good example is Fritz Leiber’s Fafhrd and the Gray Mouser series. Ace would generally reprint all six titles every year. In 1985, only Swords and Deviltry was reprinted in the series and that had not been reprinted in 1984. All the titles were reprinted for the last time in 1986 and that was it. A similar pattern took place with the Conan titles. It seemed in 1983 that you could walk into a K-Mart and see a bunch of Andre Norton titles. You didn’t in 1985. Ace was going the the Del Rey route and allowing pulp sword and sorcery to lapse. The main sword and sorcery series was Geo. W. Proctor and Robert E. Vardeman’s Swords of Raemllyn. The editor at Ace must have liked Steven Brust as his Jhereg (1983) and Yendi (1984) as those enjoyed multiple printings. 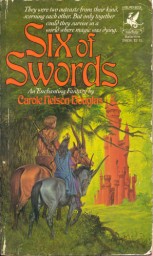 What replaced sword and sorcery

D.A.W. Book went through similar changes. Kenneth Bulmer managed to put out three of the Dray Prescott sword and planet novels in 1985 and that was it. One last novel came out in 1988. Charles Saunders’ The Trail of Bohu was near impossible to find in fall 1985. Meanwhile, Marion Zimmer Bradley’s Warrior Woman (irritatingly told in the present tense) was ubiquitous. So ended an era, you were not going to find a reprint of Henry Kuttner’s Elak of Atlantis or Gardner F. Fox’s Niall the Wanderer stories collected as paperbacks. I can remember seeing a wire rack at a grocery store in October 1985 with all of Dennis McKiernan’s Iron Tower trilogy all displayed at the book section. The mighty barbarians were vanquished by the Tolkien imitations. You did have the Tor Conan pastiche series ramp up right when the rest of the genre died. The series was so dismal that it didn’t count.

Sword and sorcery fiction did not disappear completely. There were a few books still coming out in the late 1980s that might have been in the pipeline from contracts years before but they were noteworthy due to the scarcity of titles by this time.