Last week, I began to examine The Philip K. Dick Reader. I had quoted Algis Budrys who observed Dick’s short fiction in the 1950s was all over the place. Here are the next five stories: 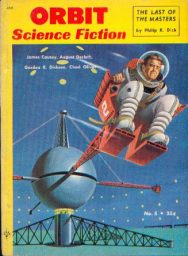 apocalypse is a recurring item in Dick’s fiction. This starts with a robot coming out of hibernation. The robot is turned on periodically to guide an isolated community in old technology. The story switches to three members of the Anarchist League. Their job is to root out old technology. Mobs took down all the governments and destroyed the robot managers a few generations past. They are sent to investigate reports of holdouts in the mountains of Virginia. Given a car ride, they are in a crash and then attacked by guards from the settlement. One injured in the crash is taken prisoner. One escapes and makes his way into the central hub with Bors the robot destroyed at the end. The story ends with spools with the robot’s memory saved “Just in case the times change.”

“The Father Thing” (The Magazine of Fantasy & Science Fiction, December 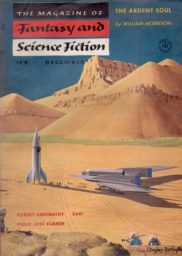 1954). A story that has been reprinted many times. I read that Dick was a fan of H. P. Lovecraft growing up. The story is from the perspective of a boy who notices things are not right with his father. An investigation with a couple of neighborhood kids reveal an alien invasion with alien copies of humans. They are grown in pods in a patch of trees. The kids discover a centipede like creature that is directing the infestation. This story predates Jack Finney’s The Body Snatchers which is very similar in plot.

“Strange Eden” (Imagination, December 1954). An exploration team lands on a planet that is very earth like. One of the crew comes across a cottage 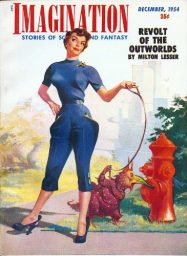 with a beautiful girl. Sort of Ray Bradbury in tone. This paragraph reminds me of something that would have been in Weird Tales:

“I was old before you were born. I was old before your people had rocket ships. I was old before you knew how to weave clothing and write your thoughts down with symbols. I’ve watched your race advance and fall back into barbarism and advance again. Endless nations and empires. I was alive when the Egyptians first began spreading out in Asia Minor. I saw the city builders of the Tigris Valley being putting up their brick houses. I saw the Assyrian war chariots roll out to fight. I and my friends visited Greece and Rome and Minos and Lydia and the great kingdoms of the red-skinned Indians.”

Brent insist on relations with the girl to his detriment. She is the origin of the Circe myth. He turns into a lion like animal. 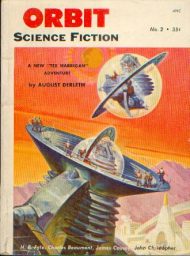 protagonist. Tony Rossi is part of a human colony on one of the planets in the Betelgeuse system. Earth is at war with an insectoid alien species. Things are turning against Earth. Tony is off to play with some young “Beetles.” Things don’t go well as the Pas-udeti’s attitudes have changed. Tony is rescued at the end with knowledge that his family will probably evacuate Betelgeuse.

“Null-O” (If, December 1958). Lemuel is a psychopath. He is also a mutant. Psychiatrist Dr. North examines Lemuel who explains his theory of Null-O, a unified theory of the universe. Lemuel is taken to a secret government facility staffed by fellow Null-Os. They design and make ever bigger bombs. 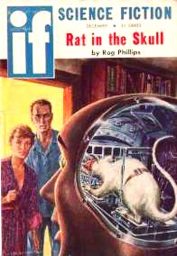 Lemuel converts them to his theory “that in reality, there are no objects. The universe is actually a unity.” Null-O personnel have gained control of the world governments. Coordinated H-bomb attacks across the globe. “Fused pits of metal bubbled and sputtered as far as the eye could see. In Africa, Asia, on endless island and out-of-the-way places, surviving human beings cowered in terror.”

The Null-Os plan to detonate E-bombs to destroy the Earth but that is interrupted by an attack by human survivors. The story ends with Lemuel contentedly waiting to be killed by enraged human survivors. Pretty nihilistic this story.

Of the five stories, one is science-fiction horror, another slightly whimsical, two very down-beat, and one with an ambiguous ending. A pattern is emerging ten stories into the collection that Philip K. Dick is obsessed with the downfall of man from nuclear war.