This is the third batch of stories examined from The Philip K. Dick Reader. 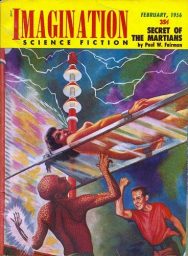 “To Serve the Master” (Imagination, February 1956): Applequist is outside and finds a half-buried robot in a ravine. The robot is dead but not damaged. They were all thought destroyed years ago. Applequist lives in one of the underground cities run by North American Companies. It is a corporate dystopia authoritarian in nature. He rebuilds the robot who gives a story that men did no work a hundred years before. At the end, Applequist finds the truth that the robots revolted and the one he helped has gotten away. One of the better stories in this collection. 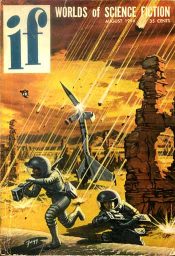 “Exhibit Piece” (If, August 1954): George Miller works in the History Agency in a 20th Century exhibit. He dresses and acts the part of a 20th Century man. Dick is known for stories on “What is reality?” This one of them as Miller is living in a 20th Century simulation and he is not able to tell reality psychosis. 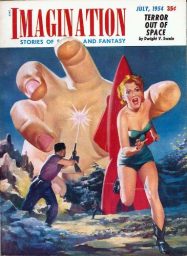 “The Crawlers” (Imagination, July 1954): Radiation leakage is causing deformed babies. A government man is sent to do something about it. The deformed human mutants are called “crawlers” as they don’t have arms and legs. They have formed a colony and are spreading.

“They were bringing building material, clay and weeds. Smearing it with some kind of ooze and plastering it in rough forms which were carefully carried beneath the ground. The crawlers were two or three feet long; some were older than others, darker and heavier. All of them moved with agonizing slowness, a silent flowing motion across the sun-baked ground. They were soft, shell-less, and looked harmless. . . The weird parody of human faces. Wizened little baby features, tiny shoebutton eyes, slit of a mouth, twisted ears, and a few wisps of damp hair. What should have been arms were elongated pseudopods that grew and receded like soft dough. The crawlers seemed incredibly flexible; they extended themselves, then snapped their bodies back, as their feelers made contact with obstructions.”

The crawlers are gathered together and sent to an island where they are hopefully isolated. There is an ewww factor in this story. 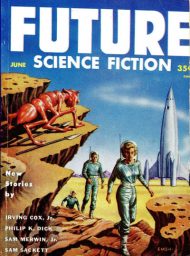 “Sales Pitch” (Future Science Fiction, June 1954): I thought of Jack Williamson’s “The Humanoids” when I read this story. Dick attempts a humorous spin on Williamson’s iconic story. Ed Morris’ house is invaded by a fasrad, a robot that does many things. The fasrad pesters Morris constantly to take the deal for buying a fasrad. Dick’s future is often 1950s America, but with robots. Always robots. Ed Morris commutes to Jupiter for work battling traffic. This aspect of his fiction does not age well. 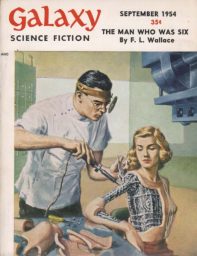 “Shell Game” (Galaxy, September 1954): This is a story that again questions reality. A group of dissidents from Earth are marooned on a planet in the Betelgeuse system. They are periodically under attack from Sol but no bodies are ever found. A story full of paranoia where the characters don’t know who is to be trusted.

The pattern continues with one story with some forced humor, a couple of stories regarding reality, one with the revolt of the robots. The robot revolt is a story idea that Dick would revisit of course getting him adapted into the movie Blade Runner.