This is the fourth installment in a series wherein I examine a batch of stories from The Philip K. Dick Reader. So far, the stories show the Cold War with the potential for WWIII weighed heavily on Philip K. Dick’s mind. Robots were also a favorite topic. 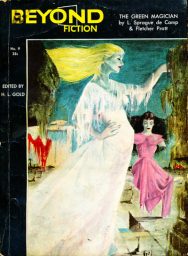 “Upon the Dull Earth” (Beyond Fantasy Fiction #9, 1954): There is what I call the Curse of Unknown. Periodically you have some critic turned editor who decides to publish a magazine in imitation of the magazine Unknown. The problem is a few critics may have liked Unknown, not enough readers did. Unknown fiction was generally a smart-ass modernist fantasy. Think of the T.V. show Bewitched. Beyond was a short-lived fantasy companion to Galaxy in the early 1950s with predictable results. The magazine did not last long, just like all the other attempts to do an Unknown type magazine. Dick’s “Upon the Dull Earth” is not smart-ass fantasy but something good. Silvia attracts a flock of winged supernatural entities with offerings of livestock blood. Silvia thinks one transitions at death and she can’t wait. Things go wrong when she summons them one too many times and gets burned to a crisp. Her fiancée, Rick attempts to first communicate with her and then bring her back. That is easier said than done. I am surprised that story has not been anthologized more. This is very out of character from what little 1950s fantasy fiction was published. This story has a darkness to it without any fake gothic trappings. It has shown up a fair amount of times in PKD collections. 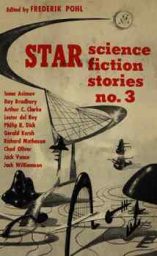 “Foster, You’re Dead” (Star Science Fiction Stories #3, 1955): This is a reprint from a paperback original and not a digest magazine. Mike Foster is a schoolboy with a fixation on his family getting their own bomb shelter. Philip K. Dick wrote in The Best of Philip K. Dick:

“One day I saw a newspaper headline reporting that the President suggested that If Americans had to buy their bomb shelters, rather than being provided with them by the government, they’d take better care of them, an idea which made me furious. Logically, each of us then should own a submarine, a jet fighter, and so forth. Here, I just want to show how cruel the authorities can be when it comes to human life, how they can think in terms of dollars, not people.”

The story is a commentary on consumerism. 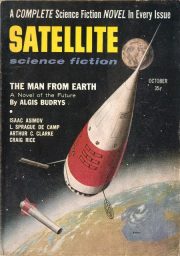 “Pay for the Printer” (Satellite Science Fiction, October 1956): Another post-apocalyptic story. WWIII has happened and the ability to make things has been lost. Luckily, benevolent aliens have provided the means to reproduce things. But– “The Biltong had become sterile in their struggle to keep the human race alive. Dead eggs, progeny hatched without life.” Things are running down. Some humans are making the climb up making crude products but with their own hands. 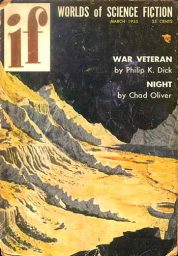 “War Veteran” (If, March 1955): A. E. van Vogt was a big influence on Philip K. Dick and you can see it in this story. Earth, Mars, and Venus are veering towards war. An old man shows up in the park with a medal festooned tunic claiming to have fought in campaigns in a war that Earth eventually lost. When discovered, factions within Earth’s government struggle on what to do. Is this guy to be believed or not? Is he from the future? If you have seen the movie Bladerunner, you will recognize a plot device as the veteran from the future is a human construct. 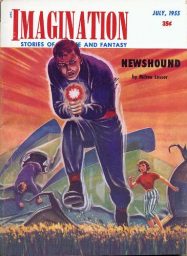 “The Chromium Fence” (Imagination, July 1955): This story has satiric element but relevant today. Society in the future is divided between Purists and Naturalists. There are brawls in the street. Don Walsh cannot escape it even at home as his son is a teenage Purist fanatic and his brother in law a Naturalist. Walsh’s son narcs out his uncle summoning political goons to deal with him. Walsh gets caught up in it all despite just wanting to be left alone. People need to read this story now.

There were some strong stories in this batch. A good fantasy-horror, a convoluted A.E. van Vogt pastiche, a good bitter satire. Next week will have some stories adapted into movies.