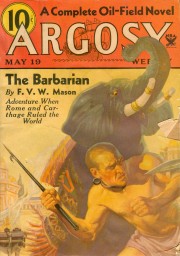 F. van Wyck Mason was well known for sailing ship, American Revolution, and American Civil War historical novels. Before he was a best selling novelist, he wrote for the pulp magazines. His Captain North, a sort of proto-James Bond series appeared in Short Stories before the hardback novels. He wrote adventure stories as F. V. W. Mason including French Foreign legion and jungle tales. He also wrote at least four ancient and medieval historical novels.

One was “The Barbarian,” a six part serial in Argosy starting May 19, 1934. Cealwyn, son of Penda, is a Celtic prince from Britain taken as a hostage by the Carthaginians. He is put to work as a slave at a big grinding wheel (like the cinematic Conan in 1982). Cealwyn tries to escape, captured, but saved by the noble woman Tiratha. The Second Punic War is going on during this time. Cealwyn befriends a Roman captured at the Battle of Cannae and also Spartan mercenaries who despise their Carthaginian paymasters. 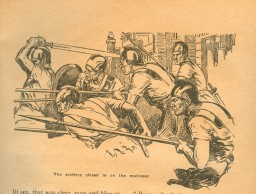 Skullduggery ensues with Cealwyn and conspirators escaping Carthage to Sicily to fight with the Romans. Mason might be the second best pulp writer of battles after Robert E. Howard. He does make some historical mistakes as having the Spartans in 6th Century B.C. hoplite armor instead of the lighter Hellenistic era helmets. A Spartan officer draws his gladius when it should be xiphos but this is not going to make a difference to the casual reader. 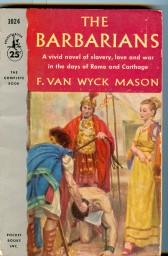 Barbarians. Mason added a framing device at the beginning and a flashback of the Carthaginians murdering Cealwyn’s sister. The Carthaginians are depicted as a wholly corrupt, evil, despicable people with no redeeming values. There is no moral ambiguity here.

Now comes the interesting part. This novel or rather the first half was made into a T.V. pilot in 1960 by NBC as Revak the Rebel. The peplum boom was at its height and this was a trial balloon as a T.V. series. Cealwyn is renamed Revak and played by Jack Palance. The movie manages to capture the pulp energy of the source material. Unfortunately, the DVD available has rather washed out colors.

Two other Mason historical novels were reprinted as paperback. His crusader novella “The Sword of Vengeance” from Argosy has never been reprinted. 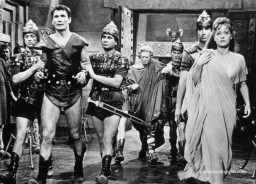