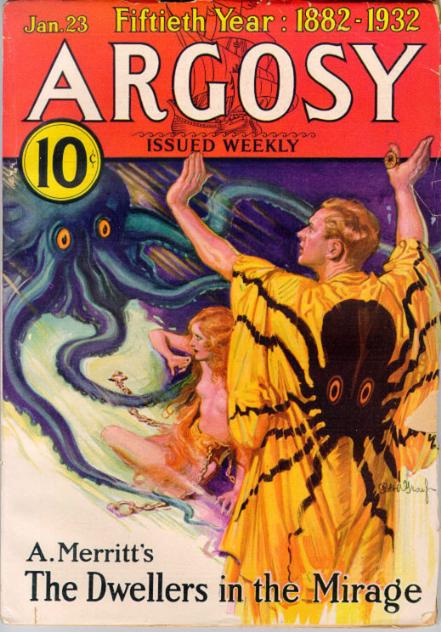 Dwellers in the Mirage was originally serialized in six parts in the pages of Argosy magazine January 23, 1932 to February 27, 1932.

The only real piece of lit-crit I could find on Merritt is in Science Fiction Writers (Charles Scribner’s Sons, 1982). I picked this book up at a library book sale maybe five years ago.

E. F. Bleiler edited the book and wrote the entry on A. Merritt. He had this to say about Merritt:

“Reputations come and reputations go, but in the fields of science fiction and fantasy there is probably no other great reputation of the past that has suffered as much as that of A. Merritt. During the 1930s and 1940’s he was widely considered the greatest science fiction writer of modern times. He even had the then-unique distinction of having a magazine, A. Merritt’s Fantasy Magazine, named in his honor. All this, of course, was in the precritical days, and today Merritt is seldom ranked among the more important the more important authors of the pulp era.”

Merritt has the reputation for a lush, ornate writing. Bleiler has this to say on his style:

“Merritt, like Marie Corelli, seemed to equate descriptions of beauty with beauty, and just as Corelli would rave vulgarly about roses, roses, roses, Merritt attempted to create a brilliant picture or sensuous mood by a frequent use of words describing color and sound. The result is sometimes a shower of terms, at best conveying a sense of the subject’s alieness, at worst almost constituting a parody of late nineteenth-century traditional verse. Yet behind all these odd mannerisms, it must be admitted, was a skilled verbalist who was well aware of what he was doing. His was not a sin of ignorance. . . His hobby was the study of mythology and religions, and he delighted in mythological syncretisms–raided, obviously, from popular works. . .For the most part this material lies heavily and inappropriately on the surface verbal texture. In a sense, one must admit, Merritt was only imitating the art forms of his formative period around the turn of the century, when, as with the British art nouveau lapidaries, a surface flash of decoration might be thrown upon an otherwise bare formalized surface.”

Bleiler does consider Dwellers in the Mirage as “the most significant of Merritt’s science fiction novels.”

I had to laugh at Bleiler. He ridicules Merritt for identifying the Uighurs of Central Asia with the Tocharians. Bleiler excoriates Merrritt for postulating a

“Nordic, Indo-European drift, bearing with it elements of Norse religion and mythology. That he took this historical nonsense seriously is show by an unsigned article that he wrote for the American Weekly, presenting the same point of view.”

Bleiler is the one who is wrong and Merritt was correct. Jean Manco had this to say in Ancestral Journeys:

“The first Indo-European move east had all the boldness that would come to characterize the steppe nomads. A group set out from the Volga-Ural region to trek some 2,000 km (1,250 miles) to the high steppe of the Altai Mountains c. 3300-3000 B.C. “

Mummies found in the Tarim basin have red and blond hair. The clothing is plaid similar to Celtic designs. DNA analysis has confirmed a western origin. The males carry Y-DNA R1a1a, the classic Indo-European signature.

You hear of Genghis Khan having red hair. That is from these east bound Indo-Europeans before history who made it as far as Kansu, China. The Uighurs moved into the Tarim Basin after the Kirghiz destroyed their Khaganate in Mongolia. They absorbed the Tocharians and are known for often European appearance.

Dwellers in the Mirage is subdivided into “books” which corresponds with the 6 serialized portions. The novel starts with Leif Langdon and his friend Jim, a Cherokee traveling in an out of the way portion of Alaska. They hear drums and that makes Leif think of an incident a few years before in the Gobi Desert.

Leif accompanied a scientific expedition to the Gobi. Merritt appears to have based this on Roy Chapman Andrews’ expeditions to Mongolia in the 1920s. 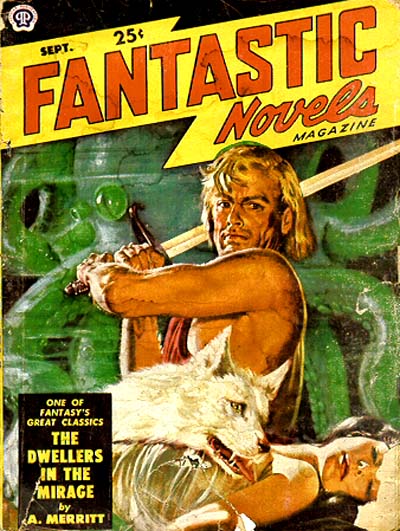 A group of Uighurs take Leif, who is described as a tall, blond throwback to his mother’s Norwegian stock to their temple. They recognize the old blood. He is given a ring and summons a tentacular monstrosity through a large yellow stone that acts as a dimensional gate. A teenage girl is sacrificed to Khalk’ru the god. Leif flees in terror from the temple and ruined city of the Uighurs.

Leif and Jim find a valley that changes in appearance as they get closer. Entering through a heavy layer of humidity, they enter a lush, fairy forest. They discover two golden pygmies (Rrrllya) staked to the ground and tortured by moving, poisonous vines. They free the pygmies and find they speak a language related to Cherokee. In fact, they are the little people of Cherokee mythology.

There is a near escape across a river from a group of red-haired women warriors on horseback. In the land of the Rrrllya, the meet Evalie, who is a normal human. The Rrrllya appear to worship her. Eager to see the broken bridge of Nansur, Leif sees a group of the Ayjir across the river. Words ensue and Leif’s personality is taken over by Dwayanu, a former Ayjir leader in the homeland of the Gobi. Flashing the kraken ring, the Rrrllya rush him and push him into the river. Escaping the giant leeches that guard the river, Leif emerges on the other bank as Dwayanu. Lur and Tibur take him to the city of Karak.

There is a plot hole I noticed. In Leif’s first encounter with Lur in escaping across the river, he yells he does not take orders from the witch-woman. Tibur the Smith also speaks to Leif/Dwayanu as if they are old enemies. Dwayanu supposedly lived before the abomination, the desertification of the Gobi. How would he know Lur or Tibur? They know of Dwayanu through prophecy and legend but are not sure if it is Dwayanu or not.

Dwayanu has a fling with Lur who is both a warrior and controls some supernatural looking powers. He is a stunning red-head who leads a band of women warriors. Before Jirel, before Red Sonya and Red Sonja, there was Lur.

I noticed this interesting passage:

“By Zarda! But it was as it was of old–enemies to slay, a city to sack, a nation to war with and a woman’s soft arms around me. I was well 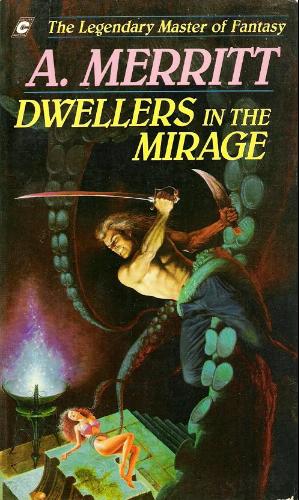 Now compare this passage by Robert E. Howard from “Queen of the Black Coast” (1934):

“Let me live deep while I live; let me know the rich juices of red meat and stinging wine on my palate, the hot embrace of white arms, the mad exultation of battle when the blue blades flame and crimson, and I am content.”

Dwayanu leads an attack on the city of Sirk, which is inhabited by dissident refugees from Karak. They have had enough of human sacrifice. Merritt has a good blood and thunder sequence of the taking of the city. Evalie and Jim are in Sirk brought by a false message believed sent by Leif. Tibur the Smith gives a killing blow to Jim. Jim’s death breaks Dwayanu’s hold over Leif’s mind.

Leif settles the score with Tibur:

“I lifted my sword to slash at Tibur’s throat. I gave him no warning. It was no time for chivalry. Twice he had tried treacherously to kill me. I would make quick end. . .Before he could clench me again, my hand had swept down into the girdle and clutched the dart. I brought it up and drove it into Tibur’s throat just beneath his jaw. I jerked the haft. The opened, razor-edge flanges sliced through arteries and muscles. The bellowing laughter of Tibur changed to a hideous gurgling. His hands sought the haft, dragged at it– tore it out. And the blood spurted from Tibur’s mangled throat.”

That is about a graphic a death as ever put on paper.

Leif takes the captive Evalie back with him to Karak trying to convince her that Dwayanu is submerged in his mind and not in control. That night, Lur abducts Evalie for sacrifice to Khalk’ru.

Leif arrives with his body-guard and smashes the yellow stone portal for Khalk’ru as it tries to enter this dimension. Lur manages to kill Evalie before being taken down herself with a javelin. The novel ends with a broken Leif vowing to leave the Shadow Land despite pleas from the Rrrllya and Ayjir to rule them.

I do have to say the character of Evalie has almost no personality outside as some sort of emblem of goodness. Lur is much more interesting. 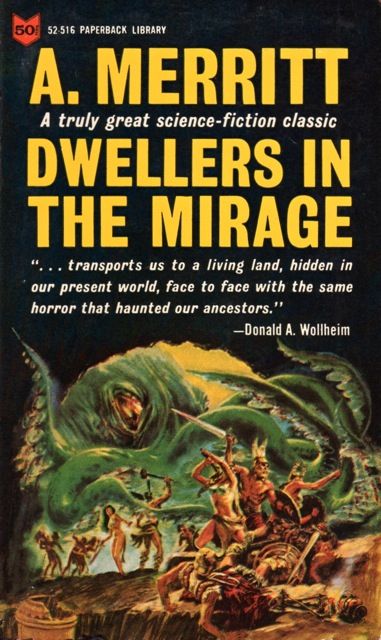 This is one of the great novels of American fantasy. Avon had two paperback editions in 1944 and 1952. There was a hardback omnibus in 1952 with Face in the Abyss. Paperback Library did two printings in 1962 and 1965. One with a very cool cover. Avon again reprinted the novel starting in 1967 through 1976 with three printings.

Collier Books reprinted the novel for the last time as a mass market paperback in 1991. That is the edition I have. I think I bought it at a Half-Price Books in Cleveland in the late 1990s. I don’t remember even really reading the novel in detail but sort of scanning it. I have corrected that.

Merritt kept up with the contents of Weird Tales. He even wrote some letters to “The Eyrie.” Khalk’ru is right out of H. P. Lovecraft as the tentacle horror from another dimension who dissolves its sacrifices. A case could be made that the Nordic barbarian angle is from Robert E. Howard. Merritt would have read King Kull and Bran Mak Morn. Turlogh O’Brien came along in fall 1931. Dwellers in the Mirage was probably already written and submitted to Argosy by the time the Dalcassian axe man was in print.

Right after Dwellers in the Mirage had finished serializing in Argosy, Robert E. Howard had made a trip to the Rio Grande region of Texas in March 1932. That is when the character of Conan and the Hyborian Age came about. Coincidence?