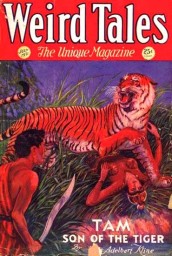 Otis Adelbert Kline was a middling writer for the pulp magazines in the 1920s and 1930s. He was present in the very first issue of Weird Tales, March 1923. His last story, co-written with Frank Belknap Long was in the July 1943 issue of Weird Tales.

One of his novels from Weird Tales is “Tam, Son of the Tiger.” Kline supposedly gave the synopsis to Farnsworth Wright, editor at Weird Tales, during a slump that was turning into an emergency.

The novel itself was a six part serial from June/July to the December 1931 issues.

Tam, the infant son of Major Charles Evans, was carried off and a raised by a white tigress. A bandit turned Buddhist lama Lozong had raised the tigress and found Tam around age 12. Lozong teaches Tam all about sword work. Tam, acts in classic jungle lord fashion including an elephant friend, Ganesha.

Tam rescues a beautiful girl in golden armor from a man-eating tiger. The girl turns 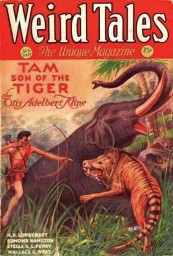 out to be Nina, Princess of Arya, a country in a subterranean world called Iramatri. She has come to warn the world from Siva the Destroyer, avatar of the god and ruler of one of the cities in Iramatri who plans world conquest.

Tam and his father’s party separately enter the portal to the vast cavern world of Iramatri. There are captures, escapes, monkey men, canine men, dinosaurs, mammoths, an Andrewsarchus, and different types of four armed giants. There is a show down in Nina’s city of Aryatun with her uncle who has usurped rule.

Nina and Tam then travel to the Land of the Gods to petition the gods to save mankind from Siva the Destroyer. There are travails getting there including a giant nine headed cobra and a river of fire to cross.

Tam comes to the rescue of Nina from Siva the Destroyer, killing him with a throne dagger to the third eye. Tam blacks out but see his body and the seven immortals looking down. Here is what has me confused, Siva the Destroyer states that Tam has won and saved the world though it has cost him dear. Nina beseeches the goddess Nina Mahadevi to save Tam, which she does. 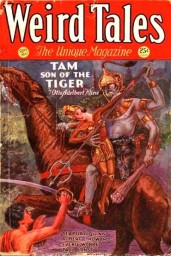 Tam uses a tulwar for most of his swordwork. He uses a yatagan at the end loaned to him by Lozong.

This novel is not a great one. Kline reused the plot for “Jan of the Jungle” which had appeared in Argosy earlier the same year. There is a ketchup on chocolate ice cream feel to the novel. Kline had a heart attack in the middle of writing this novel. He finished it in the hospital, almost giving Farnsworth Wright a heart attack. Wright was running the novel in Weird Tales before it was finished!

Darrell Schweitzer has characterized Lin Carter as the Otis Adelbert Kline of his day. Actually, I will give Lin Carter an edge over Kline in this comparison. Kline was a writer best remembered as an able imitator of Edgar Rice Burroughs but he never wrote anything I have read that is unique. His science fiction is clunky (as most science fiction from that era tends to be). His Dragoman stories are imitations of Kipling and not that pulse pounding. 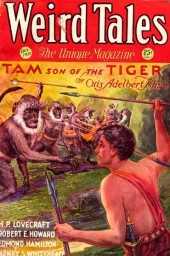 Avalon Books did produce a hardback of the novel in 1962. Pulpville Press has more recently reprinted it, so you can read Tam, Son of the Tiger if you really have to.