The Pulps Were Not Kids Literature 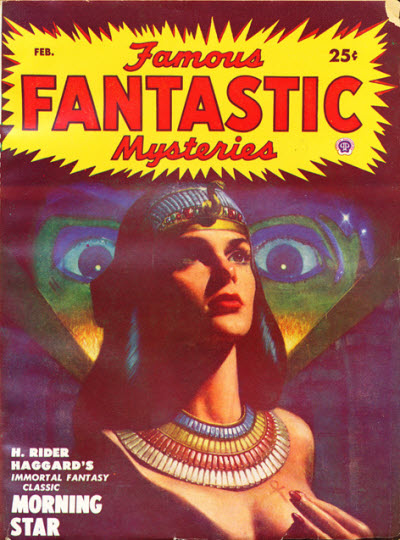 Black Gate has a great post up about Famous Fantastic Mysteries, an anthology drawn from the magazine that kept the classics of the early days of fantasy and science fiction in print with top flight covers that could rival the likes of Margaret Brundage and Frank Frazetta. Put together in 1991, it represents an extremely good introduction to the science fiction and fantasy canon:

In short, this volume looks absolutely fantastic and is absolutely worth tracking down. Certainly, the A. Merritt selection is among his best works. If the rest are as well chosen, this has to be one of the best reads anywhere.

The comments on the piece are, however, a first rate example of educated aliteracy.

James McGlothlin: I must be naive but I’m always a little taken aback at how racy some of these 1920s (or earlier) magazine covers and inside artwork were. When they’re not just being purely titillating (which I get for marketing purposes), they are actually very effective and powerful.

This is so wrongheaded it’s positively baffling.

In the first place, the pulp covers from the 1920s and earlier are fairly tame. The notoriously racy covers of Margaret Brundage came out in the thirties. And the positively sizzling Virgil Finlay covers from the Black Gate post are of course all from the 1940s.

Secondly, pulp authors like Francis Stevens and A. Merritt did not write “kid’s literature.” They created first rate entertainment for an extremely broad audience comparable to the target audience westerns or of later films like Casablanca or The Big Sleep. We do have kids magazines from era and Argosy and Weird Tales were not among them. Anyone that doubts who the intended audience of these stories were can simply read through the letter columns to confirm this. You’d basically have to have never read an actual pulp magazine in order to be unaware of this.

Finally, the accusation that this artwork is sexualized says more about the commenter than it does about the work itself. Romantic. Idealized. Titillating, even. But sexualized? Sorry, no. If you want sexualized, go read Marion Zimmer Bradley or Piers Anthony. Coming from a generation where something as ludicrously stupid as “My Sex Junk” is presented on fake science shows aimed at children, this is absolutely absurd.

And this is actually worse than people sitting around congratulating themselves for being saner and more sophisticated than the dead authors and artists they routinely and unfairly psychoanalyze. Indeed, it is we that are the generation of predominantly repressed and psychologically damaged people. Going back and actually reading the old pulp stories…? It’s an awesome experience that is almost precisely like climatic scene of Cinema Paradiso where the guy plays the reel containing all the scenes from the movies that had been cut out by the censors.

As much as we have made our forbears into bugbears of prudery and repression, it is people of our times that have been denied seeing tales that are epic, fantastic, awesome, and inspiring. The fact is, today’s censors are far more exacting than the old commissars ever dreamed of being.