The Question of Pastiche

Sometimes your opinions get challenged. This happened recently when I received the new first issue of Worlds of the Unknown from the revived Spectre Press. This small press magazine contains the second “Elak of Atlantis” story written by Adrian Cole. Henry Kuttner wrote the original four Elak stories for Weird Tales that were published from 1938 to 1941. Adrian Cole has now written two Elak stories that are pastiches.

A pastiche is described as an artistic work in a style that imitates that of another work, artist, or period. Robert E. Howard fans are very sensitive to the concept of pastiche as you had L. Sprague de Camp, generally with Lin Carter or in later years his wife Catherine Crook de Camp co-write Conan the Cimmerian imitations. De Camp was unfit in temperament to write Conan as he could not write a Conan story without someone else providing the plot. That is why he recruited Lin Carter who had a Conan imitation of his own, Thongor of Lemuria. Plots for Thongor stories were converted into Conan stories inserted within the Lancer paperback volumes as if they had co-equal status with the original Robert E. Howard stories. The stories would have been perfectly fine Thongor stories but as Conan, most fans found them wanting. It got worse with Conan and the Spider God which is probably 95% Catherine Crook de Camp in the late 1970s. 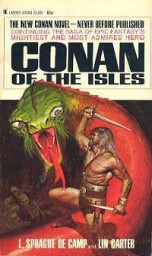 Counterfeit Conan. Would have made a perfectly fine Thongor novel.

Karl Edward Wagner was supposed to write three Conan novels though he managed to get only one written with accusations of sabotage by de Camp from Wagner. Wagner wrote a novel of another Robert E. Howard character, Bran Mak Morn, and failed to deliver a second promised novel so his statements have to be taken with a grain of salt. David C. Smith and Richard L. Tierney were hurriedly recruited to deliver a second Bran Mak Morn novel that was closer in spirit to Howard’s character than Wagner’s novel. The merchandising and exploitation of the Conan character took a nosedive with the Tor pastiche novels that started in 1982 with Robert Jordan starting the series that ran for 43 volumes by various authors. The nadir was reached in 2003 with Harry Turtledove’s Conan of Venarium where he hijacked elements of Robert Bloch’s Norman Bates character and grafted them onto Conan. John C. Hocking’s Conan and the Emerald Lotus is the one novel that closest in Howardian pace. 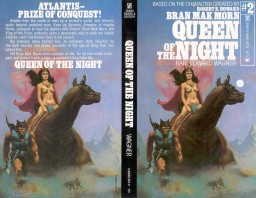 Which brings us to the new Elak stories. Adrian Cole’s skill equals that of Henry Kuttner if not surpassing him. Cole captured the spirit of Kuttner’s tales adding something yet not violating anything in the original stories. Cole has done it before writing a rather good King Kull pastiche “Treason in Zagadar” (The Anthology of Fantasy & the Supernatural). Here we have a case where the pastiche though created, as an imitation is more than readable and not an embarrassment. I joked with Adrian that he could next tackle Rald of Forthe next. For those who don’t know Rald, he appeared in two stories in Weird Tales by Clifford Ball in 1937 and ’38.

The idea did spring into my mind of an anthology of stories of old orphan sword and sorcery characters such as Rald of Forthe, Jirel of Joiry, Prester John/Wan Tengri or mid-period characters such as Gardner Fox’s Kothar or Lin Carter’s Thongor. It is probably too much to ask for above mediocre results. Pastiche just does not seem to work out well most of the time. 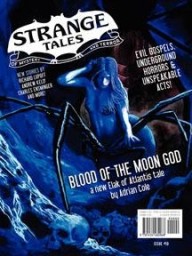 Pastiche is rare in science fiction and fantasy fiction. The Conan pastiches are the most egregious example. A few other examples are Asimov’s Foundation and Roger Zelazny’s Amber.

I have found much enjoyment when a writer is inspired by a classic work but creates something his own. Poul Anderson for example wrote three stories inspired by Robert E. Howard for Planet Stories (“Witch of the Demon Seas,” “The Virgin of Valkarion,” and “Swordsman of Lost Terra”) that are much better than his Conan the Rebel. Tanith Lee wrote two stories for the Amazons anthologies that are a tip of the hat to C. L. Moore’s Jirel of Joiry. How much better off are we that Leigh Brackett created her own Mars instead of writing John Carter/Barsoom stories?

Philip Jose Farmer’s two Opar novels are something that straddles the pastiche boundary but not slavishly imitative by any reach. He used Edgar Rice Burroughs’ lost degenerate colony of Atlantis and produced in my personal opinion, two very entertaining novels. 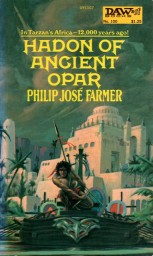 The final result is inspiration appears to edge out imitation when it comes to creativity. A heartfelt imitation is going to work once in a while but it is going to be the exception, not the rule.