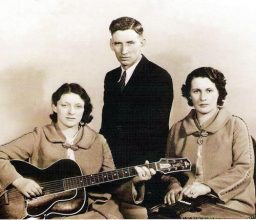 This post has nothing whatsoever to do with SF/F. But if you’ll bear with me for a moment …

I’ve always had a vague distaste for the genre officially known as “folk music.” But it didn’t turn into active dislike until a local radio DJ asked me to transfer an old reel-to-reel tape labeled “Woody Guthrie.”

It turned out to be a live show by a former associate of his, performing Guthrie’s songs. It was excruciating. The guitar playing was bad, the singing was worse, and the songs were nothing special. But the worst part was the enthusiastic applause after each song by the audience of pretentious hipsters.

I listened to some old recordings by Guthrie himself, to see what the fuss was about. It wasn’t much better. His guitar playing was clumsy and plodding, he didn’t have much of a voice, and most of his songs were inferior rewrites of traditional songs, replacing the original lyrics with political lyrics. Here’s the original version of his most famous song, recorded in 1933 by the Carter Family.

Woody Guthrie was a mediocrity. Admittedly, he was a major influence on the generation of musicians who appeared after 1960, including authentically great talents like Bruce Springsteen. But it wasn’t because of any special talent on his part. It was because he had the right kind of politics, he was championed by a group of leftist New York intellectuals, and he was in the right place at the right time. Ask yourself if a devoutly religious musician, with equal or greater talent, would have gotten the same kind of support and fame.

Guthrie, at least, lived the life of an authentic folk musician, riding the rails and laboring in the fields and factories. The same can’t be said for that other legend of folk music, Pete Seeger, a party-line Red and unrepentant Stalinist. Seeger wrote exactly one hit song, an awkward and mumbling number with lyrics taken verbatim from Ecclesiastes. It took the arranging genius of The Byrds to make it a hit.

It’s interesting that almost every prominent folk musician post-1950 was a card-carrying Communist, er, I mean, “victim of McCarthyism.” You didn’t get into the club unless you had the right politics. The major exception was the Kingston Trio, who were reviled by the leftist folk establishment for their calculated commercialism and resolutely apolitical lyrics. But even the Kingston Trio was a pale, watered-down imitation of the real thing.

The Carter Family were the biggest superstars of the original, pre-war folk music. They sold millions of records between 1927 and 1956, and profoundly influenced everything that came after them. They’re almost forgotten today. If they’re mentioned at all, they’re classified as “country” or “gospel,” not folk music.

The mainstays of the group were Sara Carter’s melancholy vocals and Maybelle Carter’s innovative guitar playing. They were highly skilled and absolutely authentic at the same time, with none of the artificiality the 1960’s folk revival. Their early recordings are a bit stark; you may prefer the later ones, with three-part harmonies by the Carter daughters. This song is especially lovely.

The Carter Family is only the tip of the iceberg. There’s a whole world of pre-war folk music, untainted by politics and hipsterism, waiting to be rediscovered. You won’t hear it on the radio. The local “folk music” show, beloved by affluent hipsters who donate generously to the station, doesn’t play it. The only time I’ve heard it was on a short-lived show by a college kid who hailed from somewhere in the wilds of Appalachia and grew up listening to it.

While we’re on the subject, look up “Gaelic psalm singing” and unlearn everything you thought you knew about the origins of blues.

To those involved in the Pulp Revolution, the story of American folk music will be hauntingly familiar. Isn’t this exactly what the Left did to SF/F, when they memory-holed entire decades and claimed to have invented the genre themselves?