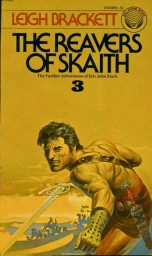 Ballantine Books published Leigh Brackett’s third and last book, The Reavers of Skaith, in August 1976. Twenty months had gone by since the publication of The Hounds of Skaith. Brackett did edit The Best of Planet Stories #1: Strange Adventures on Other Planets that came out in January 1975, only three months after The Hounds of Skaith.

The Reavers of Skaith has my personal favorite cover by Jim Steranko. Eric John Stark has the Jim Steranko 1950s pompadour. An anecdote:  in 2001, Jim Steranko had the room next to me at Pulp-Con in Dayton, OH. My wife and I were leaving the room to get breakfast (probably at the wonderful Breakfast Club diner in Dayton). Jim Steranko was in the hallway just ahead of us with pompadour and white cowboy boots. My wife said to me “Who is that?” My reply, “Jim Steranko, one of the great paperback cover artists. You will speak of him with all due respect.” Steranko has lean fighting men, no balloon armed steroid giants. He also likes all sorts of straps with cool skull shaped belt-buckles.

At the end of The Hounds of Skaith, things were going well for Stark. He had defeated the Wandsmen in three separate battles that were severe setbacks for them. The last battle had been won using planet hoppers, essentially helicopters with laser cannons mounted on them from Penkawr-Che’s starship. Stark had the Wandsmen on the ropes.

The opening scene to The Reavers of Skaith is a jolt with Stark bound, on the ground, and drugged. Penkawr-Che has gone rogue taking the diplomatic mission from Skaith hostage for ransom. As it turns out, Stark has given himself up to Penkawr-Che when he lands at Irnan and demands his surrender, or else. He wants the details on finding the underground stronghold of the Children of Skaith-Our Mother. The Children have been collecting and studying artifacts going back thousands of years in Skaith’s history. It is a treasure trove to be looted. In the course of the story, it is revealed that Penkwr-Che is an Antarean.

Stark and Ashton do manage a hair-breadth’s escape with the plan to meet up with Gerrith and Halk to finish the job. Stark and Ashton have an adventure when captured by semi-human monks who feed the mutant sea dwelling (and human eating) Children of the Sea-Our-Mother. They are 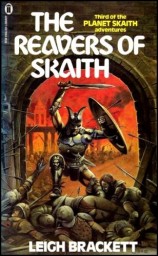 about to be sacrificed when Stark reverts to N’Chaka:

“The blue-robe with the horn turned about, startled. He had an especially brutish face. Stark took the horn from him. With it, he broke the face and sent the blue-robe flying out into the water on the far side of the platform. Then Stark swung the long horn like a ten foot club to clear the upper steps…Stark lashed about him with the long horn. It was made of metal. He roared for Simon Ashton to come to him, roared in English and in clicks and grunts.”

Leigh Brackett knew it is the man that is the weapon. Luckily a search party consisting of Gerrith, Halk, the Northhounds, the winged Fallarin have located Stark and Ashton in the nick of time.

Stark and company, rescue the rebel Wandsman, Pedrallon who is also Prince of Andrapell. He was ransomed from Penkawr-Che but removed as ruler by his brother in a coup. Stark and his merry band attack a starship when most of the crew are gone in the planet hoppers on plundering forays. Ashton manages to get a distress signal off before the remaining starship crew returns.

After the attack on the starship, they travel south to Iubar, where Lady Sanghalain rules. They find Iubar under siege from savages (the Tribes of the White Isles). It is supposed to be summer but it is cold and snowing, the sun is obscured by clouds. Mass migrations are taking place by whole populations. Skaith is experiencing a second time of migrations. 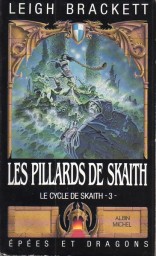 Lady Sanghalain has been expecting them. Then comes a most startling scene. Gerrith willingly givers herself as a sacrifice to the Old Sun. Throughout the Skaith series, you are not sure if there is sorcery or pseudo-science. The wind control by the Fallarin, the prophecies, the cold spells by the People of the Towers etc. The series teeters between sword & planet and sword & sorcery.

The sacrifice has the desired effect as the clouds clear, the temperature warms, and the snow melts. Stark approaches the Tribes of the White Isles to make alliance in taking Ged Darod, which supposedly is the ancestral homeland of the Tribes.

The novel moves along at breakneck pace as Stark’s army picks up the iron working Thyrans on the move to attack Ged Darod. Things are bad as hordes of people have gone there looking for succor. Rations are about to run out and the Wandsmen welfare state is collapsing.

Ged Darod is taken by storm. Ashton finds a transceiver and contacts a Galactic Union starship that had been in orbit. The Lords Protector of the Wandsmen remain defiant even after capture. Brackett has this zinger of a line:

“Ferdias was amazed. ‘Surely you do not expect our help?’
‘Damn it!’ Ashton roared, in sudden fury. ‘Somebody has got to feed these infants you’ve created. More than enough of them are going to die anyway, thanks to you.’”

When the Wandsmen are threatened with being turned over to their own people, they have a change of heart.

The Reavers of Skaith is longer than the other two books at 208 pages. The betrayal by Penkawar-Che is a classic hardboiled detective story move. It is crucial though for Stark getting to where he has to be for resolution of the war against the Wandsmen.

Amid the story, Brackett comments on the effects of generational welfare/parasitism and authorities that hurt the people they are supposedly helping in order remain in power. It is unusual for a writer late in life to come back so strong. Most writers best work at this age is long behind them. Brackett’s Skaith books were very well plotted and executed with top-notch world building. There are a few things from The Sword of Rhiannon that she revisited. The result here is more fully realized. Characterization is well done even with secondary players.

Ballantine Books would reprint the Skaith trilogy every couple of years up to 1985. I remember seeing it at bookstores all through the early to mid-1980s. It like most pre-1980 novels fell out of print. Baen books did an e-book version in 2008 and Paizo reprinted the series in trade paperback format in 2008-2009. Paizo.com still has the Skaith trilogy available for $12.99 a book. Amazon.com has only one of the Paizo editions listed as available. Haffner Press has announced The Book of Stark that will include notes for an unwritten fourth Stark novel in addition to the Planet Stories novellas and Skaith trilogy. 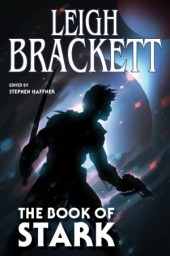