I just gasped up at her. This slip of a girl, the most notorious woman burglar the underworld has ever produced! 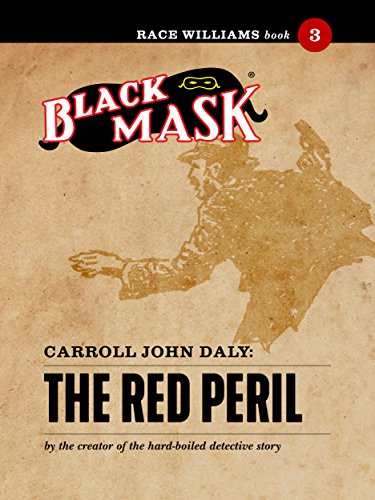 Race Williams returns, fresh off of bouts against the Klan and blackmailers. This time, an unsavory man throws $1,000 at him to not take a certain young woman’s case–to find lost diamonds. Instead, Race takes the case to spite the scumbag.

For Miss Muriel Barton needs those diamonds to receive her inheritance–an inheritance soon to be spent to find her missing half sister, Nellie Coleman. By accepting her case, Race Williams finds himself unraveling a web of intrigue and blackmail keeping the half sisters apart. And when he follows a lead to the diamonds, he crosses the path of a masked burglar who has her own interest in the case.

If Williams’s previous adventure, “The Knights of the Open Palm”, represented the first popular outing of the hard-boiled detective, Carrol John Daly’s “The Red Peril” is an early example of weird menace, seasoned with the same anti-heroic thread running from Raffles, Lupin, and Fantomas to the Shadow and beyond. And complete with the ropes and the whip. The tale and the lashwork might not be as sensationalistic or as spicy as that seen by an indignant Congress 20 years later, but the slope from here is slippery.

But said slope also illustrates that the ingredients that would create the hero pulps and superhero comics were percolating for years before a certain radio refrain of “The Shadow knows” prompted the emergency creation of a pulp hero. Also, that these ingredients were stewing in contemporary mystery and not just the historical romances like Zorro. And the result, at least at this stage, is another masked cat burglar in the same line as Catwoman and Fujiko Mine. A capable foil and openly romantic interest for a detective of action. And sometimes intimidatingly so.

The pace of the story is rapid, with at least three whipsaw revelations that change everything that Race Williams has previously learned before plunging him into one final life-or-death confrontation. And although Williams is a bit of a self-acknowledged braggart, his skills with his fist and his firearms carry him through situations where mere wits enough are not sufficient. It is satisfying to watch as Williams finds himself out of his depth, only to bluff and intimidate his way back into commanding his surroundings.

Compared to the bloodless puzzles of the Gold Age of Detective stories, Race Williams and “The Red Peril” are earthy, sensationalistic, and bloody. A constant drip of adrenaline, and, occasionally, fear. A short read, to be sure, but one crammed full of plot and excitement, with little time to rest.