The Report of Mr. Charles Aalmers 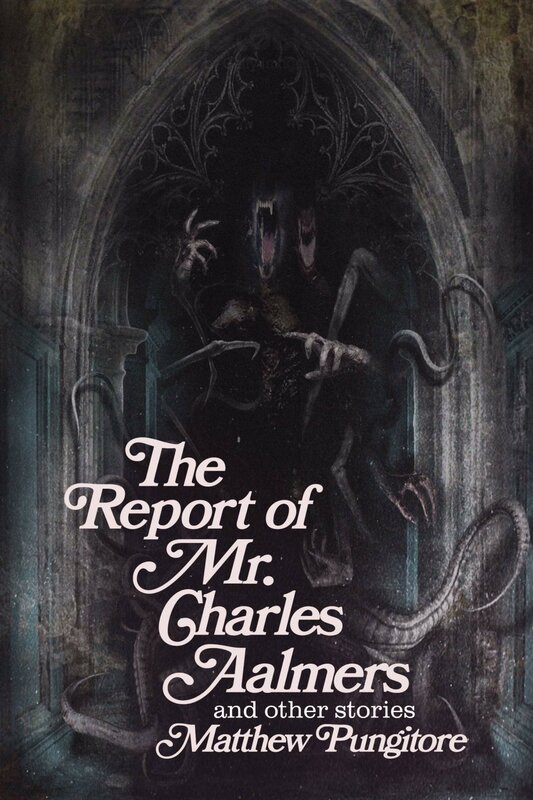 Cosmic horror is one of the forms of horror fiction. It is also often cliched and hackneyed. The Brain Leakage blog alerted me back in January to Matthew Pungitore’s The Report of Mr. Charles Aalmers and Other Stories. I am usually up for good cosmic horror and ordered this book when available upon publication.

The collection contains twelve stories within 174 pages. In the preface, Pungitore writes these stories were originally written for magazines, presses, and “people looking for stories.” They failed to find a home, so he did some rewriting to make them flow together better as a coherent collection. This is the result.

The titular story, “The Report of Mr. Charles Aalmers,” is a tale of a lost medieval romance investigated by a team of medievalists. The center portion of the story is the medieval story itself with some connection to the Arthurian cycle. During the investigation of the medieval crypt, there are intrusions from the outside. The story climax is on the Arctic island of Svalbard. I think this is the first story I have ever seen set on Svalbard. The post-script is very unsettling in Charles Aalmer’s report.

Matthew Pungitore’s prose style is very stylized. It is something from a different time. If you have read H. P. Lovecraft, Clark Ashton Smith, Arthur Machen, Algernon Blackwood, and some Gothic fiction, you will recognize what he is trying to do.

“A roiling flurry of monstrous images fell upon my dreams. In my chamber stirred a nightmare in which I saw a petrifying edifice– a blood-chilling bell tower grasping upward from out of the ruins of an old Gothic cathedral. Stuck to them were unnatural, seeping shadows. Gripping the cathedral and the surrounding ruins was a dour awfulness.” (“Jade Gorget Hex”).

“Black Torque Demon” has medieval setting. If H. P. Lovecraft had written an out and out sword & sorcery tale, this would be the result. It also reminded a little of some elements you see with Michael Moorcock and C. L. Moore.

“Dubhdris Abbey” starts in the Adirondack Mountains but flips to Killarney, Ireland. “Grumocruth” is set in rural Italy and concerns and ancient cult.

“O Tumult Unearthly” is set in the future and is the type of story to make John W. Campbell spin in his grave.

The stories are heavily gothic whether set in medieval times, the present, or the future. Crypts, abbeys, castles, secluded farms are part of the landscape. There are intrusions, whether from another dimension or somewhere in space, it not distinguished adding to the sense of alieness. The characters face crisis of faith and transmogrification when confronted with things that are unknown.

No Lovecraftian names nor books were used in these stories. Matthew Pungitore creates his own universe from the ground up. It is sort of like reading H. P. Lovecraft for the very first time.

When I read this book, I put Siriux XM’s First Wave Channel’s Dark Wave show in the background. This was a breath of fresh air as I burned out on Cthulhu Mythos fiction a long time ago due to over reliance on names and forbidden tomes instead of atmosphere to create a sense of unease (i.e. Lin Carter). The Report of Mr. Charles Aalmers is not going to be for everyone but gothic-cosmic fiction isn’t anyway.

I was surprised that these stories did not find a home in other places to begin with. Maybe that will change now.