The Rise and Fall of the Trigan Empire 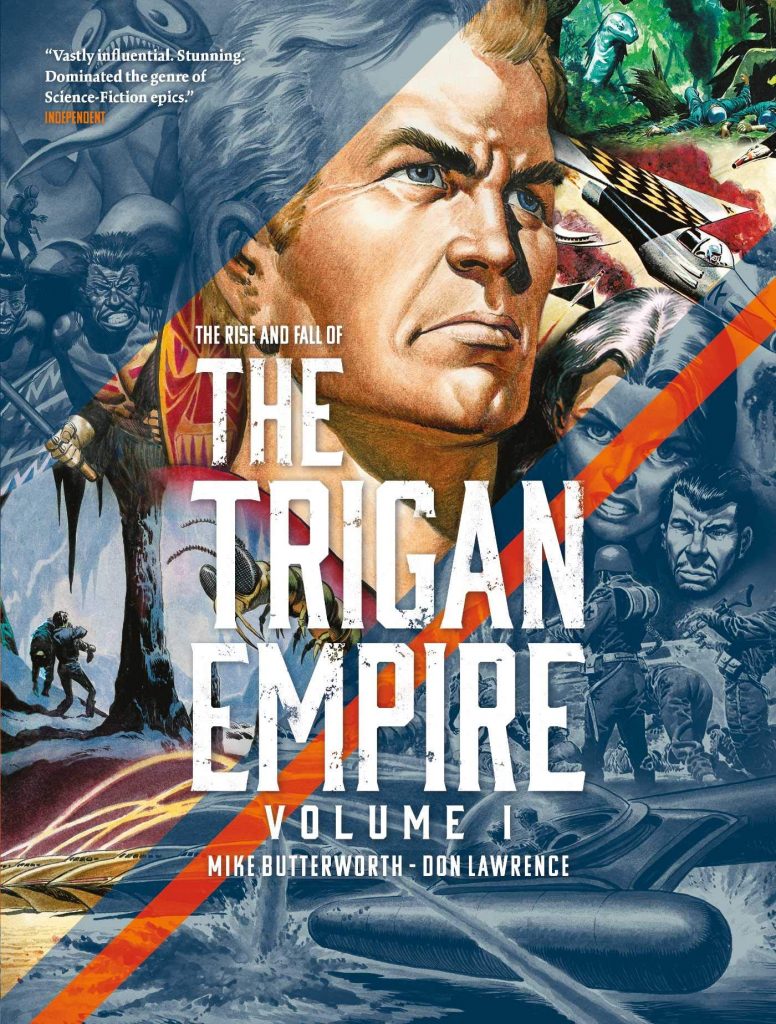 “Behold…the engines of death ride the sky. Every day they grow more numerous. Unless our nation bands together and ceases this endless wandering…we will disappear forever from the planet Elekton.” – Trigo the Mighty

In the 1930s, an alien spacecraft crashed into the Florida swamps, the crew frozen at their posts. After many years of physical examination, little was known of these men or the empire they represented. But one lone eccentric devoted his life to deciphering the texts recovered aboard the craft, until, almost in retirement, he discovers the insight needed for translation. Thus the recorded history of The Rise and Fall of the Trigan Empire was finally revealed to all.

From 1965 to 1982, eighty-eight complete stories of The Rise and Fall of the Trigan Empire graced the pages of British magazines Ranger and Look and Learn. While many writers and artists worked on the comic strip, writer Mike Butterworth and artist Don Lawrence combined their efforts on fifty. These fifty stories, doled out one full-color comic strip a week, inspired many in the British comics scene, including Neil Gaiman and Dave Gibbons. Once locked behind expensive premium collections, these tales of raygun Romans have now been rereleased in to the mass-market in three paperback and ebook volumes.

Before there can be a rise of an empire, there first must be a founding. And the nomadic Vorg were the last race anyone on the planet Elekton would foresee to rise as an interstellar empire. Mindful of the constant attacks by airfleets from the empire of Loka, Trigo has a dream of a city of culture and power from which his people can resist Loka and flourish in peace. His first attempts to build it crumble along with the city walls. But when Loka attacks the city of the Tharvs, the refugees streaming into the Vorg lands bring the knowledge needed to build Trigo’s city. From the marriage of Vorg vigor and Tharv knowledge, a new people were formed–the Trigan Empire. But Loka would not allow Trigo and his new people to live in peace, so Trigo and his brother Brag attempt to steal Loka’s airfleet and turn those terror weapons against their makers–even if it means crossing their resentful brother Klud in the process.

Such a bloodless summary for a high adventure tale filled with daring acts of heroism, stunning reversals of fortune, and crushing betrayals. But it would be the first of many in the rise of the Trigan Empire from a single city to a world government, all under the watchful eye and quick fists of Trigo the Mighty, his brother, Brag, and their advisor, Peric. 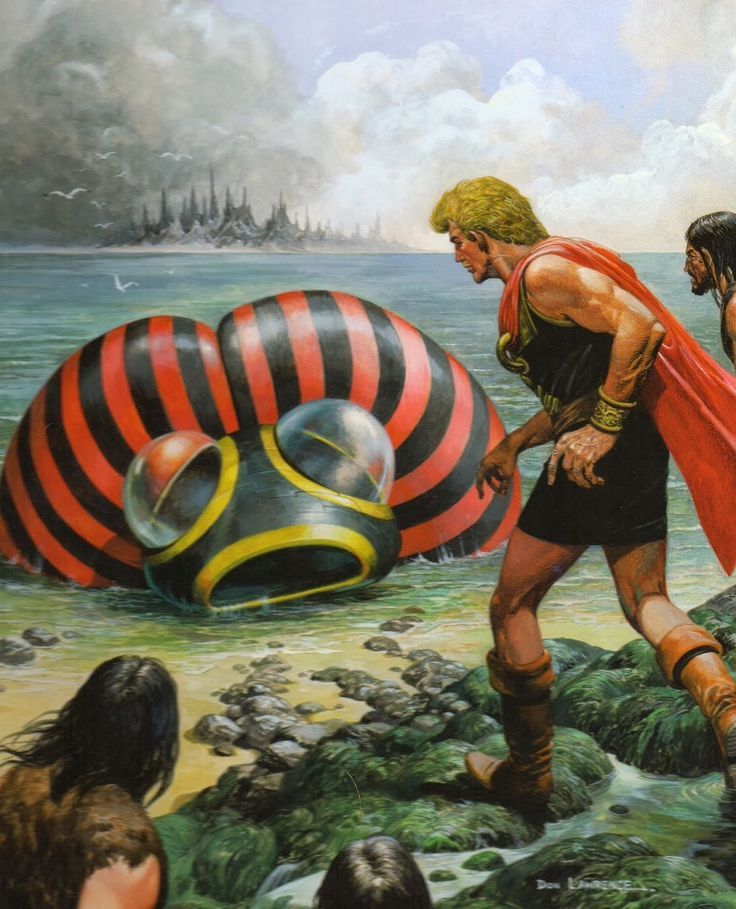 From the founding of Trigo’s city onward, the Trigan Empire and its influence comes into contact with the various countries and cultures that fill Elekton. Some meet Trigo, Brag, and, later, Brag’s son Janno, with suspicion, but the noble-minded among them are won over by the Trigans’ displays of daring and valor. The deceitful, however, get their just deserts soon after meeting Trigo. The Trigan Empire might not be a conquering empire, but it will not be conquered–as those from Loka, Elekton, and even the stars beyond have found out to their peril.

The art is amazing, and not just for that of a comic strip. Lawrence details his raygun Romans with anatomically plausible musculature, and the mix of high pulp technology with classical dress and design is charming. Each panel might well be a painting, often in bronze, steel, and imperial purple. It is an inspirational, heroic, even statuesque style that I hope to see a resurgence of.

Trigo and his companions are men of action, aspirational and noble, guided by the wisdom of the elder architect Peric, and ever on the lookout for threats to their people. And the art, beautiful, muscular, and noble as it is, only serves to heighten the heroic deeds. The Empire is a beacon of peace and prosperity because of the physical strength and character of its emperor. This is a comic meant to inspire young boys into becoming the next generation of Trigos: wise, strong, and noble. As such, the speech is formal and the action bloodless, but the clashes of sword, raygun, and fighter ship are tense and riveting. And if a young reader (or much older one) is able to pick out the obvious allusions to Romulus, Remus, Rome, and Greece, and is interested enough to try Livy’s The History of Rome, so much the better. And for all the talk of the Fall of the Trigan Empire, that disaster is still many generations from Trigo the Mighty. 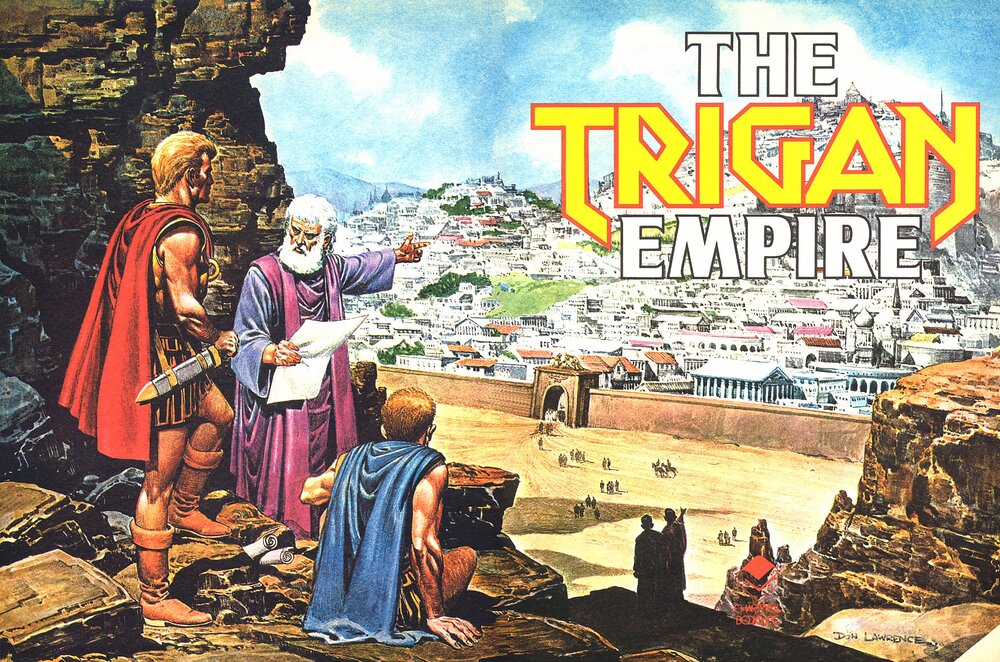