The Sands of Kalahari 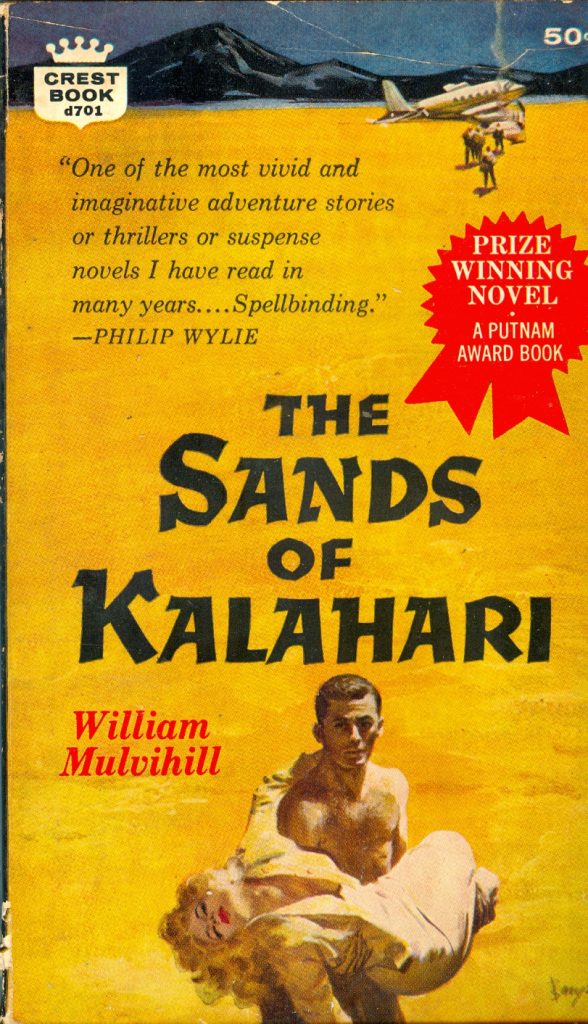 The survival novel is a subtype of the adventure story. The whole man vs. environment thing drilled into you in 9th grade English class. William Mulvihill’s The Sands of Kalahari was originally published in 1960 winning a Putnam Award. Mulvihill (1923-2004) had around ten novels from the late 1950s to the 1990s.

You may have seen the movie Sands of the Kalahari from 1965 starring Stuart Whitman. The novel is rather close to the movie with a few minor changes.

Seven passengers take a plane from Angola to South West Africa. The plane crashes in the Namib Desert. A problem is the flight by a small-time operator and the flight not registered. No one knows the plane is missing. The novel starts with the passengers burying one who was critically injured in the crash.

They gather what they can and walk towards some mountains in the distance. They are lucky to find water and a type of edible melon. They also learn to hunt and eat lizards.

The novel becomes a character study. Sturdivant the pilot sets out west across the desert to find help. Mike Bain is an alcohol and nicotine addicted engineer who has worked in Africa for a while. O’Brien was on a hunting trip. Grace Monkton is a divorcee. Jefferson Smith, a black professor from Harvard. Grimmelmann, an aging German traveling to see a brother he has not seen in decades. He had served in German South-West Africa before WW1.

Bain fights off an infection and the DTs. The experience tempers him physically and in character. O’Brien was a rich kid who was happiest as a Marine captain in WW2. He makes the calculation that there are too many people for the environment to support.  O’Brien adapts to the arid landscape. He hunts antelope and has a war with a baboon troop that he views as competitors. He regresses to a natural man that would be familiar to readers of Jack London, Edgar Rice Burroughs, and Robert E. Howard.

He first forces Jefferson Smith out into the desert. Smith is lucky in coming across some Bushmen. After a few weeks, the sell him to a villainous group of mixed Bantu-Bushmen villagers for a cow. He ends up constructing mud huts as a slave to these Africans.

O’Brien attempts to force Grimmelmann out who dies by accident from a cut of a poisoned Bushman spear point he found. Bain is forced into the desert but doubles back and captures O’Brien whom he places in a pit.

The cloudburst fills O’Brien’s pit with water but he survives through a will to live. Sturdivant made it through the desert taken into custody for trespassing on a diamond company’s land. Finally, the authorities believe him and send help. Bain and Monkton are rescued by a small plane sent by the diamond company. O’Brien is left watching the plane leave. The novel ends with him killing the leader of the baboon troop and you aren’t sure if the baboons are going to get him or he becomes the leader of them.

Hard to believe an adventure novel won a book award. How things have changed. The story moves right along. There are details on surviving in the Namib-Kalahari Desert. My 1964 paperback has 192 pages. It is not a long novel. I also thought it did not drag. I have Mulvihill’s The Man Trackers, another African adventure novel in the to be read stack of books.