The Scorpion: The Devil’s Mark 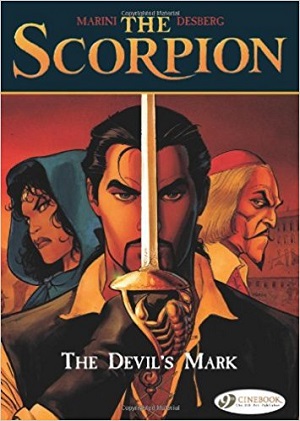 As Armando Catalano, a holy relic dealer, raids the underground tombs of 18th century Rome for the bones of martyred saints, a prince of the Church plots with a Gypsy poisoner to murder him. For Armando bears the mark of the scorpion on his shoulder, a devil’s mark identifying him as the son of a heretic who was burnt alive for seducing a priest from the church and Christian beliefs. While the poisoner toys with him, Armando sets out to learn the name of the cardinal who torments him, the reason for the enmity, and the truth behind his mother’s death. Along the way, he stumbles across an ancient conspiracy from the days of Rome and a plot to murder the Pope. Digging deeper, Armando, known to all as the Scorpion, discovers a stolen Vatican archive in Cardinal Trebaldi’s mansion. These papers deal with his mother’s trial and execution, leading Armando to believe that he is the illegitimate son of the Pope. Can the Scorpion save his presumed father from the assassin’s blade?

Written by Stephen Desberg and illustrated by Enrico Marini, The Scorpion follows Armando as he seeks to unravel the conspiracy, challenge the power of Cardinal Trebaldi, and discover why his mother’s execution lays at the center of both. Following in the footsteps of Zorro and Alexandre Dumas, this Scorpion is at home in high society and in the gutters, a dashing, cultured swordsman and scholar who will not rest until he brings down the men behind his mother’s death–no matter how powerful they might be. The first book offered in English, The Devil’s Mark, serves up the first two volumes of the Scorpion’s adventures, The Devil’s Mark and The Pope’s Secret, taking readers from the discovery to the end of the Papal conspiracy in one sitting.

The Scorpion’s tales brim with conspiracy and mystery, with multiple threads weaving simultaneously. While Armando raids tombs and mansions, Cardinal Trebaldi plots his treacheries, the Gypsy poisoner Mejai conducts her double-dealings, and as-yet unnamed members of the ancient Nine Families conspiracy hold their counsels. Yet The Devil’s Mark is able to navigate seamlessly between these threads without confusing the reader, even as it switches between them multiple times on the same page. The economy is impressive, as Desberg and Marini wring as much storytelling and emotion as possible from the space provided by each panel. The fight sequences are sharp, and forceful, with the elegance of a swashbuckler and the brevity found in the pulps. The narrative always remains clear and uncluttered, even as it runs along at pulp speed. 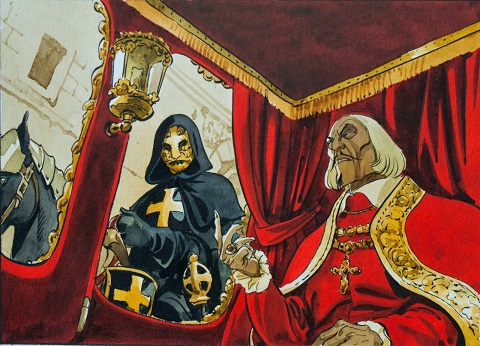 This clarity is helped by the art. The character designs are clean-lined and unique, allowing for instant identification of each of the characters. Even when age or scarring etches lines into a character’s face, these adornments are worn lightly. And color and composition are used to help distinguish the elements of each panel from each other. The Scorpion loves the opulence of its red palettes, but not once did a panel blur into an indistinguishable mass of reds and browns. With a year to work on each volume, the greater care offered by more time is evident. Fortunately, the opportunity for indulgences in art was passed up.

As always, it is the characters that make a swashbuckler. Armando is as quick with his sword as he is with his wits and witticisms, but both are a veneer over the burden set upon his scorpion-scarred shoulders. As the Scorpion he wears no mask, and his identity is protected by the stratification of society. Those of his lordly clients that know him as Armando the holy relics dealer never interact with the guards and ruffians that know him only as the Scorpion. His banter with his assistant Hussard bears more than a passing resemblance to Indiana Jones’s with Sallah, illuminated by Hussard’s physical resemblance to Dr. Jones’s grave-digging friend. Indeed, comparisons to other swashbucklers come easy, but the Scorpion never falls into imitation or pastiche of the more well-known sword and cape heroes. As the first of the Scorpion’s foes, the Gypsy Mejai is a dusky beauty, as dangerous as she is alluring. Her tongue is as venomous as any of the 36 poisons she employs on the Cardinal’s behalf, yet she truly serves no interest but her own. The seeds are planted in The Devil’s Mark for a tumultuous romance with Armando, although her place in his bed is not assured. Women are drawn to the Scorpion like moths to a candle, and other rivals for his affection will emerge. Finally, as the engine pushing the plot and mysteries forward, Cardinal Trebaldi shines. Driven by the demands of a dying family, his will is only exceeded by his obsession and ambition, although why he should aim all three–and the new order of warrior monks he has founded–at the Scorpion is as yet unrevealed. Right now, the mysteries this prince of the Church is hiding make him a more compelling figure than the average corrupt politician. Hopefully, when he loses his grasp on his schemes and his secrets, the Cardinal will not lose his appeal. 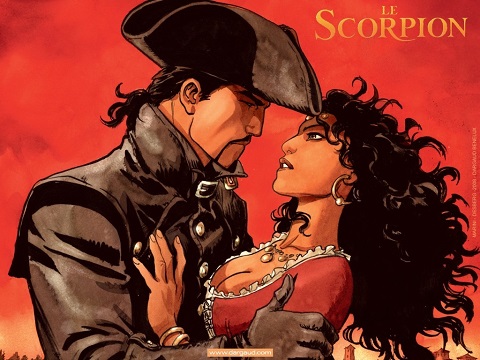 The Scorpion: Devil’s Mark offers an engaging mix of swordplay and secret history set in 18th century Rome, and is a worthy addition to the canon of adventure romances. Armando’s journey to find the truth about his mother’s death and to foil Cardinal Trebaldi’s plans also serves as an excellent introduction for readers considering stepping into the world of European comics. Along with the rest of the Scorpion’s adventures, The Scorpion: Devil’s Mark can be purchased in digital form on Kindle and ComiXology. Print copies can be ordered through your favorite book store.