Everywhere he found boiling resentment, a fierce willingness to fight against the tyranny, but it was undirected, uncoordinated, and, in any modern sense, unarmed. Sporadic rebellion was as futile as the scurrying of ants whose hill has been violated. PanAsians could be killed, yes, and there were men willing to shoot on sight, even in the face of the certainty of their own deaths. But their hands were bound by the greater certainty of brutal multiple retaliation against their own kind. As with the Jews in Germany before the final blackout in Europe, bravery was not enough, for one act of violence against the tyrants would be paid for by other men, women, and children at unspeakable compound interest. – Promotional copy for 1949 edition of Sixth Column, by Robert Heinlein, written originally in 1941. 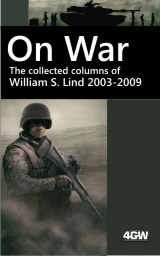 With the release of On War, I have been thinking of the impact of language in science fiction warfare. The sort of thing that the Center of Syncretic Studies  looks at in the real, modern world is something that is seen all too rarely in science fiction.

The Speaker for the Dead touches on language and alien warfare, but not in a direct strategic military sense. Ender’s guilt is not exactly Sun Tzu personified. Starship Troopers deals with war actions. The Forever War handles the aftereffects of war on the individual. E.E. Knight’s Vampire Earth series certainly addresses 4th Generation War against the alien, but focuses on tactics and military strategy and no small amount of courage and subterfuge, but, being so action-oriented, doesn’t spend a lot of time on the semiotics of war.

I’m sure there may indeed be plenty of good examples in the genre; I simply haven’t read them.

I do know of one very good exception. Going back to an earlier work – a John Campbell-inspired Heinlein book called Sixth Column – you realize just how the winning team in 4GW tends to be the one who seizes the initiative in language.

Ardmore is the “PanAsian-American” protagonist who suffers the horrific invasion of his native North America by his own race, known collectively as the PanAsians. He loses much of his family in the persecutions, and decides to fight back. One problem: he has no military background.

Worse: he is a former marketing executive. This weakness ultimately emerges as a great strategic strength the instant that it dawns on him: hopeless 3rd generation war tactics versus the conventional militarily superior invader state are not the only tactics available to the natives.

He realized suddenly that he was thinking of the problem in direct terms again, in spite of his conscious knowledge that such an approach was futile. What he wanted was psychological jiu-jitsu — some way to turn their own strength against them. Misdirection — that was the idea!

Whatever it was they expected him to do, don’t do it!

The core idea, the hero discovers, is that the “psychological jiu-jitsu” lies in speaking unexpectedly and exploiting the assumptions of the conquering state-run army suffering incurable hubris at the highest levels, and inevitable demoralization on the ground.

To say that the Oriental was disconcerted is to expose the inadequacy of language. He knew how to deal with opposition, but this whole-hearted cooperation left him without a plan; it was not in the rules.

Despite it being a Heinlein, Sixth Column is not in my experience as widely read as his true post-War books, so I’ll leave it for you to discover on your own some of the other linguistic advantages that the natives employ in the attempted overthrow of crushing foreign rule. The point is that the language of 4GW is a proven contributor to Science Fiction ideas, and yet it seems – in my limited view – to be something fairly well overlooked in recent years. If you can think of other military linguistics novels in the genre, I’d love to hear about them. As the Lilliputians learned, in 3GW, Gulliver eventually stands up.

As the CSS puts it in another, current context: “Social Peer To Peer (P2P) processes are an advanced form of information management which are crucial to both soft power and 4GW. These are being used with increasing efficacy by the Russian side, while American fears that they are losing a grip on the use of P2P propaganda have pushed them into an over-reliance on Old Media, thus exacerbating the problem in the manner of a vicious cycle.”