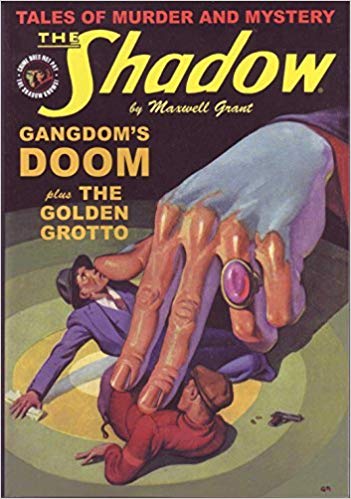 The Shadow cleans up Chicago in Gangdom’s Doom, the fifth Shadow novella.

Inspired by the April 1931 Chicago election, The Shadow takes on the crime empire of Nick Savoli, a thinly disguised stand-in for Al Capone. Gangland Chicago was a breeding ground for pulp stories, from Amusement, Inc. to Black Mask and a host of hero and detective pulps. But the editors thought that The Shadow needed a little more motivation to face their version of America’s first celebrity gangster: The order came from on high to writer Walter Gibson: The Shadow’s agent, Claude Fellows would die.

Fellows would be the first and only agent to fall in the pulps. And Gibson protested the decision. But the editors stood firm. The blow was softened as Gibson went to Bermuda, dividing his time between writing and running publicity for the magician Harry Blackstone.

Gibson would later recount how he turned the noisy Bermuda streets, complete with the hammering riveting of construction, into scenes in side alleys of Chicago, complete with Tommy gun fire. “It gave me jitters to walk past the Bermuda building, but it helped the story.”

Claude Fellows has been assigned to investigate the Chicago mob. Soon after their talk, first, his contact, then Fellows himself are killed, with the latter falling in a Tommy gun drive by.

In response, The Shadow sends Harry Vincent to Chicago, where Harry works his way into the confidence of Marmosa, a gambling king. While Harry learns about the mob’s organization, from kingpin Nick Savoli down to the hired killers, the same killers burst into the gambling den.

The Chicago killers get into a firefight with New York thugs, including one Monk Thurman. They kill one of Marmosa’s guns before Monk Thurman drives them away. Suddenly, Thurman is of great interest to Marmosa–and to Savoli’s organization. Should they hire him or kill him?

A familiar felonious face, Steve Cronin from New York, meets with Marmosa’s henchmen and casts enough doubt on Thurman to convince Marmosa’s goons to kill the New York gunman. But when they call a meeting with Thurman to kill him, no one shows. Confused, Cronin and Marmosa’s henchman leave, unaware that, in secret, The Shadow is watching their every move.

Later, Cronin meets with mob boss Savoli, who tells him to murder Chicago’s most aggressive district attorney. But before Cronin and his crew can pull the trigger on their Chicago typewriters, The Shadow appears behind them and knocks them out.

When Cronin wakes up, he crosses paths with Harry Vincent, who resolves to settle the score from earlier adventures between them. Soon after, Savoli gives Cronin a way to redeem himself from the night’s failure:

Savoli then orders Monk Thurman to eliminate the Chicago killers who shot up Marmosa’s gambling den. Monk goes out and antagonizes a set of toughs, tricking them into ambushing the killers instead of ambushing him. The toughs go into hiding. Monk Thurman claims the deed.

The killings spark a whirlwind of schemes as Savoli uses the opportunity to further cement his authority over the Chicago underworld. Monk Thurman is to be killed to appease another crime lord. That is unless he kills The Shadow first.

The Shadow is everywhere during this exchange, listening in from secret passages, cackling to himself under hidden disguises. Now he reveals himself. The Shadow interrupts a dinner between Savoli and his crime lords, defying the mob boss to his face. The Knight of Darkness pronounces judgment on Savoli for his crimes and twice over for the men who killed on his orders. The Shadow escapes, untouched a hail of bullets.

Enraged, Savoli spends days setting his murderers after The Shadow, including Monk Thurman. But they aren’t the only ones watching the streets of Chicago. Harry Vincent is as well, and Cronin now suspects him to be working for The Shadow. Cronin takes his suspicions to Savoli, who hatches a plan.

Harry Vincent is captured and tortured, causing The Shadow to make his move. After rescuing his agent, The Shadow appears to be on a collision course with Monk Thurman. But Monk’s efforts are seemingly spent more in fraying the fragile peace in Savoli’s organization–accompanied by a familiar mocking laughter. 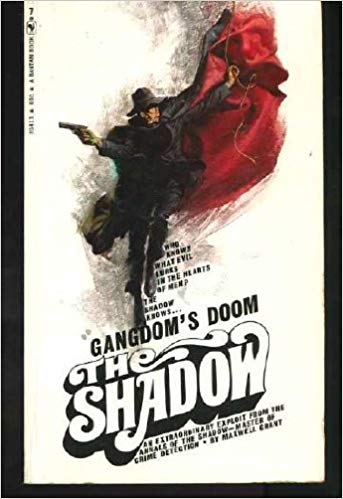 Savoli’s empire collapses in a week of brutal gang fighting. But The Shadow is not done yet, for he still has to bring Claude Fellows’ killer to justice. He distracts Savoli long enough for police to raid Savoli’s hideout. In the fight, Cronin is killed, and Savoli is arrested.

Gibson does a lot to make his story easy to read. This doesn’t mean simplified plots, flat prose, or childish vocabulary. Rather, he doesn’t get lost in exposition or distraction and makes it so the plot can be easily followed without telegraphing future events. Additionally, Gibson has perhaps the cleanest chapter organization so far in pulpdom. Each chapter can be summarized in a sentence but tells a miniature story in its own right. Unlike the hero pulps that would follow, Gibson’s prose is stylized but without all the gilt that imitators would tack onto the genre. And the tricks of the magician that Gibson was so fond of, especially misdirection, are prominent throughout the tale.

The Shadow truly owes a debt to Fantomas. Not just in the mastery of disguise, but the prose stylings are similar to those found in the French phantom villain’s dime novel adventures.

Like in the Argosy stories, the villains’ actions drive the story, not that of The Shadow or Harry Vincent. It’s almost alien compared to these days of limited 3rd-person POV. Although in the shadows and cackles, the reader can sense The Shadow’s schemes coiling around the mob occasionally striking through mistake identities and inciting mob on mob violence. It isn’t like he’s averse to using his automatics, but rumor had it that Street Smith did not want to ruffle the feathers of the mob by letting The Shadow cut loose.

So, did Claude Fellows need to die?

No. The Shadow already is an embodiment of vengeance, and, save for being the inciting action for The Shadow’s crusade, affected the story minimally. We never see into The Shadow’s thought, and he is such a mystery and an actor that we as the readers never get a clear glimpse into The Shadow’s thoughts and motivations. And for a series so dependent on mood and misdirection, there’s no need for such a glimpse to push the story forward. As such, Fellows’ death comes across as a cheap stunt at worst and a MacGuffin at best. Gibson was right to protest the editorial decree, but, as he was writing for hire, the decision was ultimately out of his hands.

But even with that compromise, The Shadow’s fame and sales continued to grow.