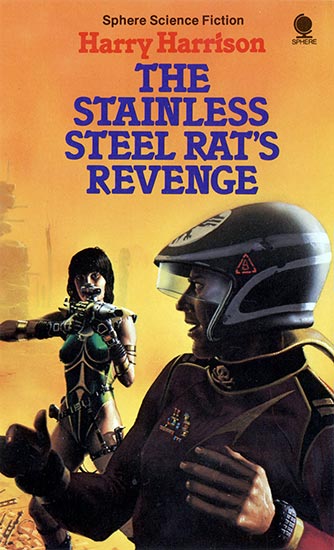 intergalactic thief extraordinaire, the books are action-packed from start to finish, inventive, and exceptionally funny.  Recently, I finished The Stainless Steel Rat’s Revenge, chronologically the fifth in the series, but actually the second Harrison completed, in 1970.  (Three prequels were written later)

While it’s among the weaker of the five works in the series I’ve read so far, it’s still a damn good book. Harrison’s patented dynamite opening (which deserves a column all to itself) is there.  It’s consistently funny and exciting, with DiGriz finding some devilishly clever solutions to problems. DiGriz also has an able sidekick in his new bride Angelina, a former mass-murdering scourge of the galaxy who Jim took down in his debut novel, now altered, thanks to brain manipulation, into merely a hyper-competent, deadly thief like himself.  There is even a menacing central villain, Kraj, who is ruthless and intelligent enough to be a match for Slippery Jim himself.  But ultimately, Jim is battling an entire planet by himself, Cliaand, a hyper-militaristic world that has successfully invaded and taken over multiple planets.  As the Stainless Steel Rat brags, it’s the poor world that should be frightened!

And yet, while I was enjoying all this, there were a number of problems with the novel I noticed, which kept it from true greatness.  And behind most of these was Harrison injecting personal views into the story in a clumsy manner.

For one, I don’t like the handling of the military.  Harry Harrison’s hatred of the armed services was intense, emanating from him being drafted into World War 2 as an 18 year-old in 1943.  While he became a gunnery sergeant and a sharpshooter, he held a bitterness towards the military for the rest of his life.  That is completely fine, and in the later-written prequel The Stainless Steel Rats Gets Drafted, he conveys these feelings in an effective, witty manner, showing the dehumanization, drudgery, and blind obedience to authority that characterizes an army.

But in this book, the anti-military attitude is reduced to generality, portraying its members as either murderous, humorless buffoons, or otherwise decent folk whose talents are best served elsewhere. This comes across as drab and simplistic, dulling the richness of the universe the Stainless Steel Rat inhibits.

However, it wouldn’t be a big problem if not paired with another flaw, namely the book’s feminism.  Later on in the work, the Cliaandans invade a matriarchal planet, where the women are in charge.  Everything was wonderful and idyllic under their rule, until the silly men rebelled.  Despite this, when the invasion takes place, it’s only the women who are brave enough to defend their world!  This would be merely eye-rolling if Harrison was trying to show that women could potentially lead a society the way men lead ours, as a counterpoint to Earth, but he goes well past that.

Later on in the book, Jim is assigned one of the planet’s few men to accompany him on a mission. This man is a terrible, incompetent coward who cries that he wanted to be nothing more than a househusband! No woman could possibly ever be written so hysterically or ridiculously. Perhaps the cartoonishness didn’t read so bad in 1970 as it does when considering the feminist lunacy of today, but it comes at a very critical point in the book’s plot.  And the tension is utterly ruined by this idiotic feminist caricature.

The funny thing about all this is that while he was more of a leftist, Harrison was no SJW, not even by the standards of his day, and his feminist work would still be utterly despised by the harpies of today.  Why?

For one, all the women, from Angelina to the Amazonians, retain their femininity.  They try to make themselves look beautiful, have an attentiveness for clothes, feel womanly sympathy and tenderness, and occasionally suffer from jealousy and irrational emotion.

Secondly, the mighty, skilled, powerful Angelina gets herself captured at one point in the book and her husband Jim must rescue her.  Nothing infuriates women with hairy armpits more than a man saving a woman he loves!

But most unforgivably , the book glorifies marriage and motherhood!  Angelina, badass and intergalactic crime titan, is desperate for Jim to marry her, crying that he doesn’t love her when he is reluctant.  And she is overjoyed and deeply fulfilled when she gives birth to twins, who she is devoted to.

In terms of inserting the author’s personal feelings, there is a brief barb about how the future universe Jim inhabits has cast off “quaint and forgotten religions”.  Harrison was an atheist and couldn’t resist putting that in there, but it’s short-sighted of a keen science fiction mind to think that man won’t adhere to some belief system, whether it’s Christianity, Judaism, Hinduism, Buddhism, Social Justice, or something new.  Humanity needs something to believe in and always will.  That little excerpt only makes the book’s universe less authentic.

Harrison also navigates a tricky dance between believable action, involving death, and a whimsical adventure.  He doesn’t always succeed.  James DiGriz refuses to kill, except in extreme instances of self-defense.  That’s okay, but he justifies this with the foolish refrain that it would make him no better than his enemies.  And the book’s reluctance to have its hero commit murder for the sake of lightheartedness feels odd when it also involves torture as well as a planetary invasion resulting in at least dozens of corpses.  This tough balancing act was dealt with better in some of the other books. 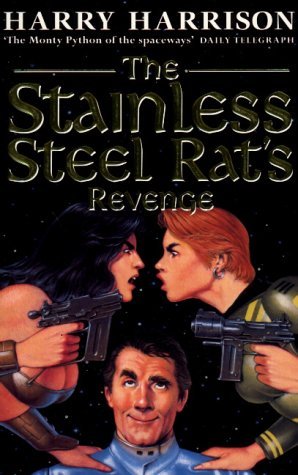 Sadly, this particular scene imagined by the artist doesn’t occur in the book. A missed opportunity!

While this afflicts the series as a whole, there is also a strange dichotomy going on between individualism and collectivism.  Namely, Jim is a rebel living outside of society who mocks its conventions and absurdities.  However, the intergalactic federations and their planets are portrayed as fundamentally decent, efficient, and benevolent.  This is especially the case in this entry.  And yet, this makes Jim and his adventures less poignant.  He is a funny, brilliant, unrepentant criminal, but in a universe that is fundamentally good and just, misses out on being more sympathetic and memorable.

Though this review has spent far more words highlighting the book’s flaws over its more numerous and significant strengths, that is simply because it’s more illuminating to talk about.  One can learn from these mistakes and avoid them, while its gifts are a product of tremendous imagination for which there is no formula.

What can we conclude?  That one must be very careful that one’s personal views enrich and add to the novel by their inclusion, as opposed to derailing and detracting them.  The Stainless Steel Rat’s Revenge is far from the worst offender, and Harry Harrison was skilled enough to more than make up for it, but it still detracted from the book’s quality.

At any rate, I strongly recommend reading the Stainless Steel Rat series.