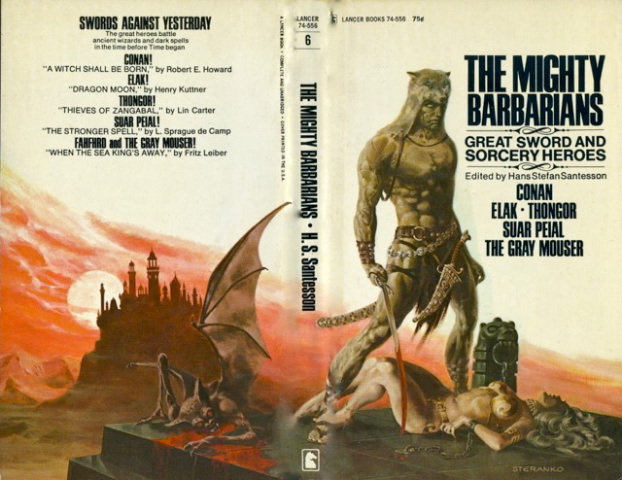 L. Sprague de Camp was part of the small second wave of sword and sorcery fiction from the early 1950s that included Poul Anderson and Jack Vance. He used to include himself as a pioneer of the genre in the introductions to the Lancer Books Conan paperbacks citing his Harold Shea stories with Fletcher Pratt. I do not consider the Harold Shea stories to be sword and sorcery. They are more Bewitched than Robert E. Howard.

De Camp was bitten with sword and sorcery after reading the Gnome Press edition of Robert E. Howard’s “Hour of the Dragon” published as Conan the Conqueror. He was so taken with the idea that he created his own Hyborian Age, the Pusadian Age. De Camp came up with a good world centered on the Tartessian Empire in what is now Spain. He had Pusad, a 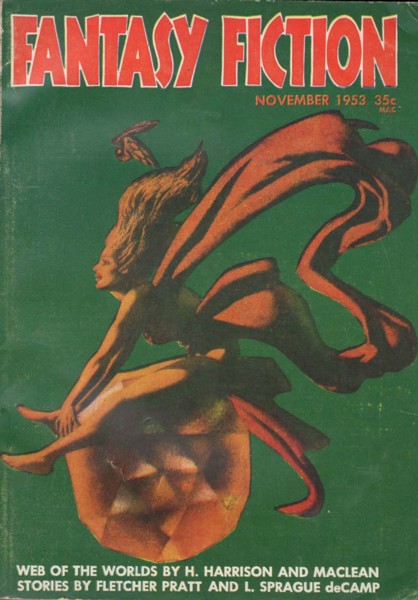 remaining portion of the partially sunken continent of Atlantis in the Atlantic Ocean along with some other smaller island chains.

The novel “The Tritonian Ring” was the first appearance in Two Complete Science-Adventure Books from Winter 1951. Two more stories quickly followed in 1951.

“The Stronger Spell” was the fourth story with the setting. It appeared in the magazine Fantasy  Fiction, November 1953. Fantasy Magazine/Fiction was one of those attempts to bring back Unknown/Unknown Worlds. It last for only four issues like other attempts to do an Unknown type magazine. Critics and editors like the idea of Unknown, readers do not.  The story also was included in the Twayne hardback collection The Tritonian Ring in 1953.

“The Stronger Spell” features Suar Peial, a bard and swordsman. He sees an attempted robbery and intervenes to foil it. Ghw Gleokh, the intended victim, joins Suar’s invitation to join him at a tavern where he will sing.

The story proceeds at the right pace with more characters introduced in the tavern. The story rapidly reaches a climax when a magician and his apprentice demand Ghw hand over a weapon he has invented. Words are exchanged, the magician’s apprentice begins an incantation that Ghw cuts short by blowing him a way with a crude firearm. The magician gets a spell in before Ghw can deal with him. The spell kills Ghw Gleokh before Suar can deal with the magician. The story ends with Suar’s friend, Midawan throwing the proto-gun into the sea.

The story borders hanging on a gimmick, but de Camp infuses the story with enough background and interesting characters to make it rise above. Suar Peial is an interesting enough character that one wonders if de Camp had thought of making him a series character. Perhaps the dearth of markets for fantasy in the 1950s prevented that. I have enjoyed the Pusad stories for what they are and wish de Camp had written more. 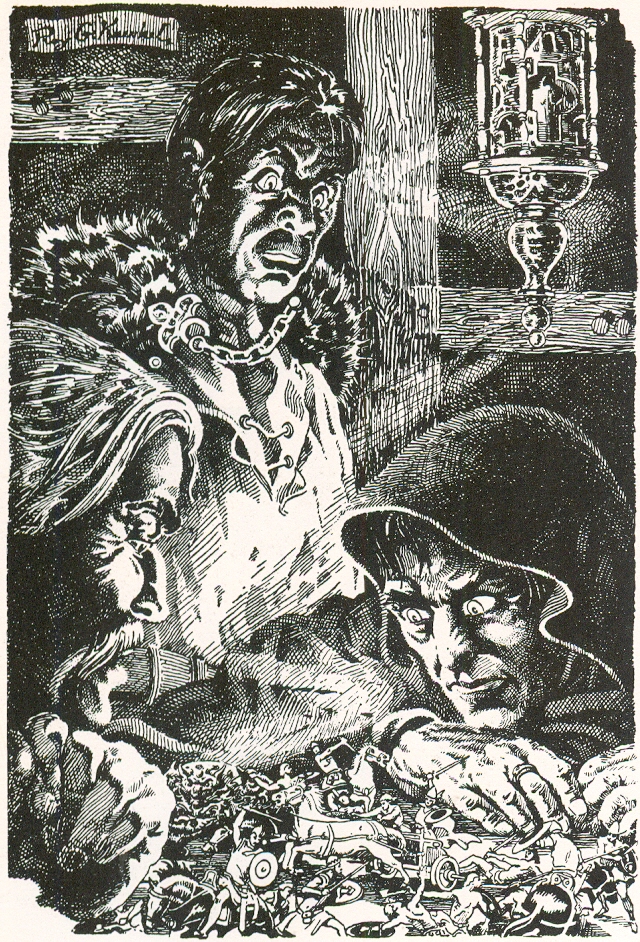 Another possibility is that de Camp simply did not have plot ideas. It has been pointed out that de Camp started out strong with his series, but they lost momentum and petered out. I can remember Glenn Lord telling me that de Camp had the Conan fragment that became “The Hand of Nergal.” He did not know what to do with it. The fragment was handed over to Lin Carter who made a rather Thongorish story but a complete story none the less. De Camp could write a Conan story if he had an outline left behind by Robert E. Howard but could not write one on his own. He needed Robert E. Howard, Bjorn Nyborg, Lin Carter, or his wife Catherine de Camp as co-writers.

The Pusad Age is put together well enough that it would have been interesting to invite other writers to participate in the world.  I could see Harry Turtledove for example writing a Pusad story. I just reread Henry Kuttner’s “Elak of Atlantis” stories last week and Kuttner’s world building is very faulty in comparison to L. Sprague de Camp.

You can get “The Stronger Spell” in the Gollancz omnibus of Lest Darkness Fall, Rogue Queen, The Tritonian Ring. I just saw a copy at Half-Price Books today.