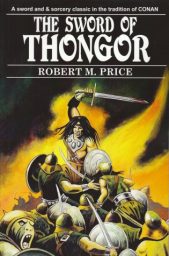 I had mentioned two years back about the idea of an anthology of orphan sword and sorcery characters– Jirel of Joiry, Elak of Atlantis, Rald of Forthe, Prester John, Kothar etc.

We have seen some characters continued by other hands, Adrian Cole has written two Elak of Atlantis stories and now we have a full-fledged collection of Thongor of Lemuria by Robert M. Price.

Lin Carter created Thongor of Lemuria for six novels and another six novelettes. Thongor’s setting of Lemuria is 490,000 years ago. Carter explains in “The Legend of Lost Lemuria:”

“In the Mysterious books of the occult is whispered the legend of primal Mu, or Lemuria, which arose, they say, before even the glory of Atlantis as born.

Half a million years ago, the old legends say, the first civilizations of Man came into being on the lost and prehistoric continent of Lemuria somewhere in the vast waters of the Pacific.”

From “The Legend of Thongor the Barbarian:”

“. . . It was an Age of Magic, when the might of Wizards strove against the tides of darkness that over the Lands of Men like threatening wings. And the world shall not again see such wizardry as reigned of old when proud Lemuria was young, and ere the Mother of Empires spread her banners over Aegyptus, young Atlan, and the rose-red cities of the May-Kings. Into this violent age of sorcery and conquest, of the assassin’s dagger and the venomed chalice, where the greed of Sark was set against the blood-lust of Druid, with the Throne of Lemuria for prize. . . came one man, a wandering adventurer from the savage wilderness of the Northlands: Thongor of Valkarth, armed with the iron thews of the warrior and the barbarian’s contempt of danger.”

As you can see, Thongor is modeled on Robert E. Howard’s Conan of Cimmeria. Interestingly, Thongor was in print in two paperback novels 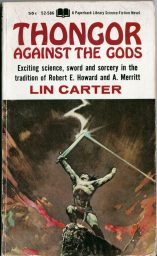 before Lancer Books began reprinting the Conan stories in paperback starting in October 1966.

The Thongor novels read as if Robert E. Howard’s Conan was dropped into Edgar Rice Burroughs’ Barsoom. The novels read like 90% Burroughs and 10% Howard. My guess if the original Lin Carter novels run between 60-80 thousand words a piece. The six novelettes that originally appeared in paperback anthologies and issues of Fantastic Stories lose some of the Burroughsian feel and take on more of a Robert E. Howard (and sometimes A. Merritt) sensibility.

Robert M. Price mentioned in Lin Carter: A Look Behind His Imaginary Worlds that Lin Carter had planned a story collection after the first two Thongor novels in 1966 to be called Swordsman of Lemuria. The first story was to be titled “The Wizard of World’s Edge,” the second “Witch’s Moon,” a retelling of the Beowulf story. “Lair of the Ice Worm” was turned into a Conan story. “The Creature in the Crypt” was turned into the Conan story “The Thing in the Crypt.” “Shadows of Zathoom” which is a pirate story.

There is an alternate universe where Ace or Pyramid Books reprinted the Conan stories (with covers by Gray Morrow or Jack Gaughan) instead of Lancer Boosk without de Camp & Carter (the Gruesome Twosome as Steve Tompkins called them). But, Swordsman of Lemuria exist in that timeline.

That being said, the Carter stories were sometimes less than what was on the surface. “Keeper of the Emerald Flame” and “Thieves of Zangabel” are overwritten for the events portrayed. They are divided up into little min-chapters that go up to 15 in some cases. If you look at the de Camp & Carter stories in the Lancer/Ace paperbacks, you will notice the same set up of generally 5-7 “chapters.” 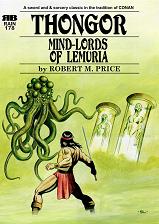 Robert M. Price has taken up writing Thongor pastiches. He is heir of Lin Carter for lack of a better description. Most of the Price scribed Thongor stories have appeared previously in Crypt of Cthulhu, Rainfall Press chapbooks, and in the collection Young Thongor.

The format is trade paperback published by the Surinam Turtle imprint of Ramble House Books. Ten stories contained within 197 pages. The book was published in August 2016.

Richard A. Lupoff has an introduction on barbarian fantasy and sword & sorcery fiction. There is a map of Lemuria.

The stories appear to be around 5,000 words on average. Price has five to seven chapters for each story.

Readers of the old Lancer/Ace Conan paperbacks will recognize “The Creature in the Crypt” which is the Thongor version. Price has moved

Lemuria from the Pacific to the Indian Ocean. He also attempts to explain why the north of Lemuria is cold and snowy. I went through the Lin Carter Thongor novels and could not find a reference that Lemuria is south of the Equator.

The three new stories for the book are “Lost-Gods of Lemuria,” “Vampires of Lemuria,” and “The Eleventh Scarlet Hell.” I enjoyed “The Creature in the Crypt,” “Lost Gods of Lemuria,” “Silver Shadows,” and “Witch-Queen of Lemuria” the most. They are efficient if not earth shattering sword and sorcery stories. Price sneaks in a little Cthulhu Mythos references here and there without capsizing the story. “Silver Shadows” was a title that Carter had planned to use but never wrote.

“The Sword of Thongor” is a satire of a recent/current political figure within the story. “The Vampires of Lemuria” has enough plot idea going for it that it could have been a short novel in its own right.

I was not so keen on “Thongor in the City of the Gods” and “The Eleventh Scarlet Hell.” Those are set later in Thongor’s life with direct involvement of the 19 gods. Price uses his theological background to create some faux Hindu epic references.

If you are unfamiliar with Thongor, go search out some Lin Carter paperbacks at your local used bookstore. Young Thongor is available in both trade paperback and Kindle format. The first three of Lin Carter’s Thongor books are available in Kindle e-book.

I believe there is a Thongor story in an upcoming issue of Skelos.

If you like Thongor, pick up a copy of The Sword of Thongor. Read a story or two a week, spread them out. If you are a sword and sorcery fiction addict as I am, this will scratch an itch.

I give this book a 3.25 out of 5 harmonic chromosome rating. 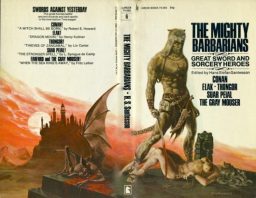