The Swordbringer: The Last Ancestor

The sequel to Alexander Hellene’s The Last Ancestor, entitled The Second Sojourn, has been recently released in ebook and paperback. With a forthcoming review in the works, let’s take a look back at the first of The Swordbringer series. 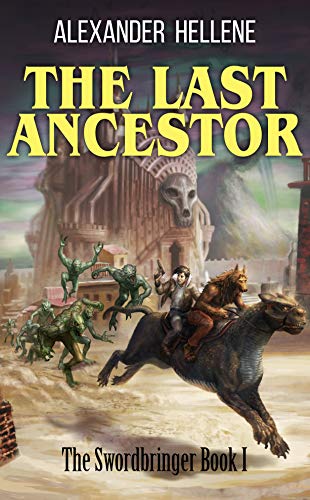 Alexander Hellene’s The Last Ancestor follows the last remnant of Christianity in the galaxy, now on the alien planet of Yxakh. Refugees from persecution on Earth, the survivors of the long flight across the stars. But they are not alone on their new home. A lizard-like race nicknamed the Growlers shares the planet, and  their rulers have found Christianity as much of a threat as the rulers of Earth did. Only human technology and bravery keep an uneasy peace.

But while proximity breeds conflict, it also fosters curiosity. Garrett has forged a friendship with a Growler youth named Ghryxa over countless dives into caves and crash sites. What they encounter below the surface of Yxakh will carry Garrett into the Growlers’ Forbidden City and into the presence of the High Lord. A single world may doom humanity to extermination–or save it.

Action is the heart of The Last Ancestor, as ravenous lizardmen, Growler bullies, thrashing mega-predators, and even human police stand in the way of Garrett’s fateful appointment before the High Lord. Bravery takes many guises along the way: trickery, bluff, gunfire, grappling, and even escape. Although there is a philosophical question at the heart of the clash of cultures, it is not debate, but courageous and even rash action which settles the matter. It is one matter to profess faith, and another to wed it to deeds. And the action in The Last Ancestor is swift and perilous enough to bear the momentousness needed to perhaps sway the enraged and powerful. And, even more tellingly, The Last Ancestor does not shy away from the costs–both to Garrett and to the human settlement on Yxakh.

For The Last Ancestor was written out of frustration with Christian fiction steeped in weak protagonists, heavy-handed messages, surrenders to passivity, and unearned happy endings. And the response, like those of Vaughn Heppner and John C. Wright, is to marry decisive action and honest belief with coming-of-age stories. Alexander Hellene is but the first in a sudden wave of authors to move a masculine and deeds-based Christianity into science fiction, and he does so without falling into the clichés of either genre. For one, it is a relief to read of a clash of civilizations written without resorting to First Contact tropes.

The Last Ancestor calls to mind Jack Vance’s The Last Castle, both in the threat to humanity and in the ever-present mysteries that are but an arm’s reach away. The viewpoint, however is from the threatened oppressed, instead of the threatened oppressor, and the result draws more from the accounts of the lives of saints than the thin triumphalisms of previous Christian fiction and the faith in rational science.

But all that makes for pleasant ruminations in the hours after reading the very real story of a young man diving headfirst into mighty deeds as he tries to do right by his family, his friends, his people, and his God.