The “Bronze Age” of comic books is said by some to have started in 1970 when Jack Kirby left Marvel Comics. Old time science fiction pulp editor Mort Weisinger (1915-1978) stepped down at D.C. Comics. The creation of Conan the Barbarian by Marvel Comics in 1970s is seen as a pivotal event in the creation of the Bronze Age. Some outstanding artistic talent came to the fore including Barry Smith, Michael Kaluta, Frank Brunner, Mike Grell, Bernie Wrightson, and Gene Colon.

Marvel Comics was a continuation of the same company founded by Martin Goodman who started out publishing pulp magazine as Western Fiction Publishing/ Red Circle Magazines. One of the titles published was   Marvel Science Stories/ Marvel Tales/ Marvel Stories in the late 1930s/early 1940s. 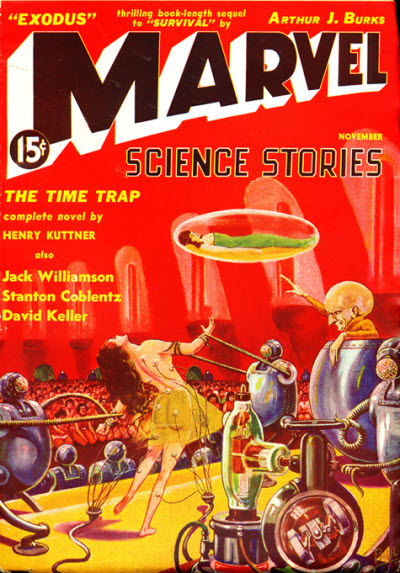 The company had been receiving letters urging Marvel to adapt the pulp character of Conan of Cimmeria to the comic book format. Marvel did the unusual action of getting the rights to use Robert E. Howard’s Conan. The new title Conan the Barbarian was under a tight budget, so the new artist Barry Smith was used for art while Roy Thomas adapted Robert E. Howard stories in addition to his own. The title had a rocky start with it almost being canceled at one point. But it grew in sales while picking up some awards along the way. By the mid-1970s, it was a top seller for Marvel Comics spawning a number of imitations, especially from D.C. Comics with short-lived titles like Beowulf, Sword of Sorcery, Claw the Unconquered. Martin Goodman’s Atlas/Seaboard Comics failed with Ironjaw and Wulf the Barbarian.

Mass market paperbacks (4.25” x 6.87”) may have been close to peak of popularity in the middle 1970s. Spinner racks were to be found in drug stories, truck stops, and corner stores. K-Mart used to have a good sized book section in the 70s. Mad Magazine had all sorts of reprints in mass market paperback form that were hugely popular. Ballantine Books produced a paperback in 1965 of E. C. comic book adaptations of Ray Bradbury, that had a cover by Frank Frazetta.

Lancer Books did some paperback reprints including Daredevil, The Fantastic Four, The Incredible Hulk, and The Mighty Thor in 1966-67. This was the same time the first Conan paperbacks were released.

Warner produced two paperbacks in 1972 and ’73 of Jack Oleck stories with Berni Wrightson art reprinted from the D.C. title The House of Mystery.

Marvel experimented with two issues of The Haunt of Horror as a digest magazine with a mix of prose and illustration in 1973.

So, reprinting popular comics was an idea experimented with at the time.

Some factors came together to bring about reprinting the Conan comic book in paperback form.

Grosset & Dunlap acquired Ace Books in 1972, by then in a mess. Donald Wollheim had left in 1971 as he saw the writing on the wall. Tom Doherty at 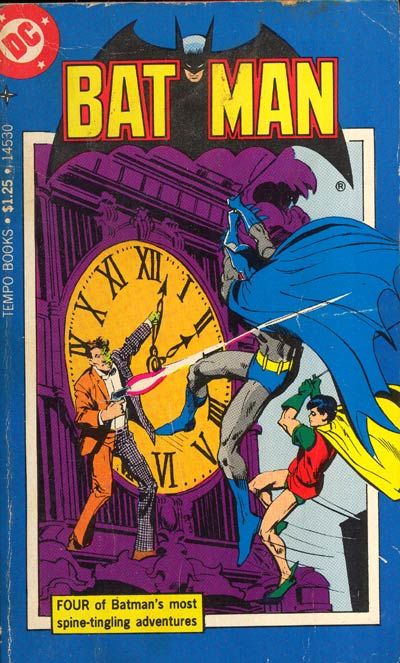 Grosset & Dunlap purchased Ace Books and turned things around. Doherty had already had success as publisher of the young adult imprint, Tempo Books. The Tempo imprint began producing comic book reprints in 1976. The titles were mostly funny book fare such as Beetle Bailey, Broom Hilda, and Caspar the Friendly Ghost. There was a Bat Man paperback in 1977.

Conan Properties, Inc. was formed in January 1977 under pressure to bring the various factions who had a claim on Robert E. Howard’s Conan the Cimmerian character together. There had been interest in a movie that was not going to happen until there was one entity to deal with. Lancer Books had filed for bankruptcy in September 1973. The L. Sprague de Camp edited series of Conan paperbacks were unavailable. By May 1977, Ace Books was distributing the same contents and covers as the Lancer paperbacks under the “Prestige Books” imprint. It all has the whiff of de Camp and his attorney about it.

So, things were clear to reprint Marvel’s Conan the Barbarian in mass market paperback form. The paperbacks would be under the Tempo Star imprint but distributed by Ace Books. 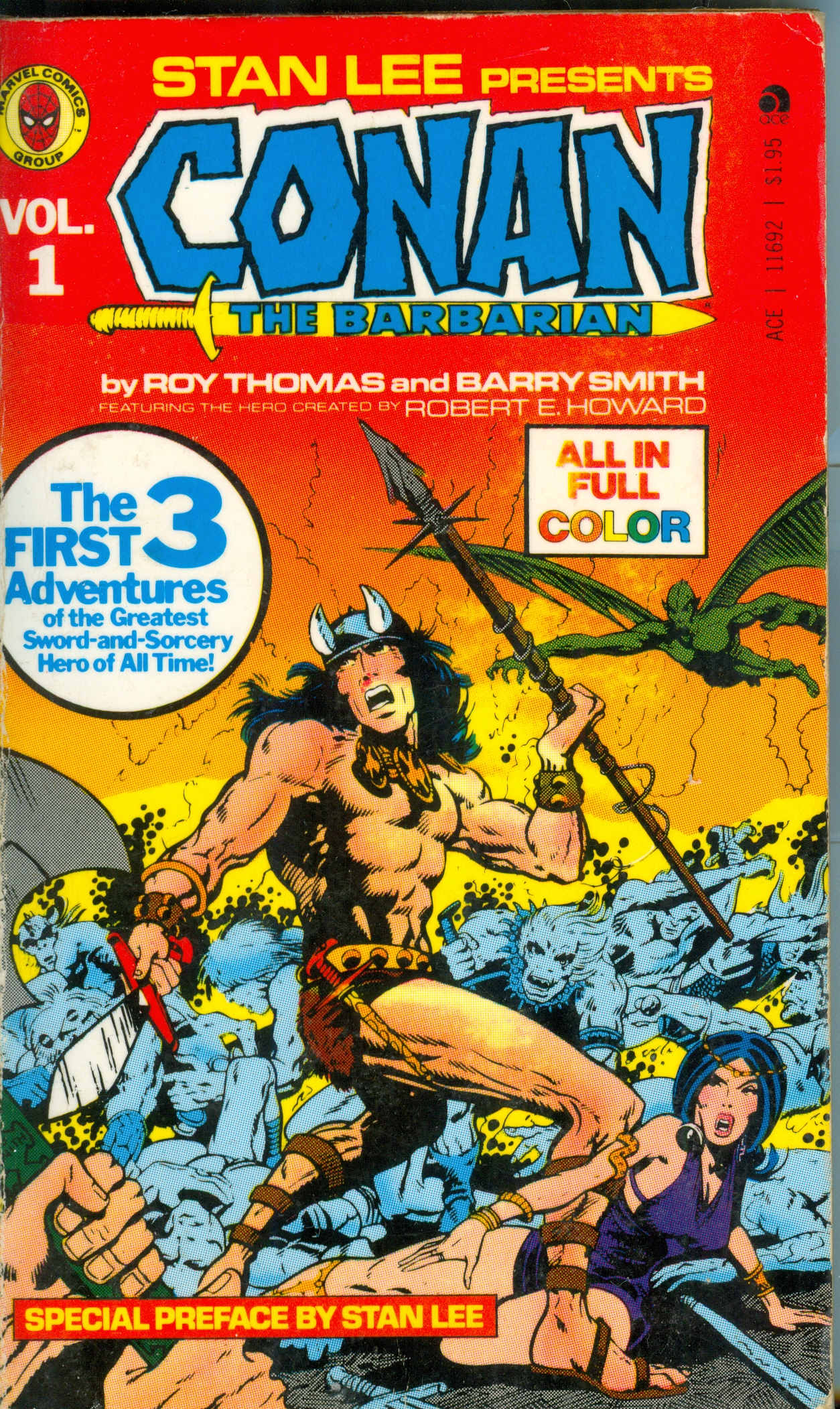 A half page preface by Stan Lee where he had this to say:

“But why this ever-increasing fascination for the bludgeoning hero of the Hyborian Age? . . . It is far too easy to say that people are turned on by the aura of violence or the semblance of savagery. No, the reasons are far deeper, far more complex. Perhaps the hint of magic, the sense of wonder, the revelation of a noble soul with in a bestial breast, perhaps all of these and more may partially account for the phenomenon of Conan.”

Roy Thomas wrote a concise two- page introduction with a quick history of Robert E. Howard, Conan, and the Hyborian Age. He admitted to formatting changes from comic book to paperback.

“Admittedly, since the comic stories were designed visually for a different format than paperbacks, we’ve had to cut panels and copy to fit– an imperfect process, but one which was inevitable.”

A map of the Hyborian Age leads things off.

“The Coming of Conan” from 1970 was written by Roy Thomas, and drawn by Barry Smith. It starts with Conan in Asgard saving Olav from Vanir raiders. The Vanir serve a shaman with a star stone that summons demons that attack the Aesir. Conan is to be sacrificed but breaks free shattering the star stone.

“Lair of the Beast-Men” was originally in the December 1970 issue of Conan the Barbarian. This is another story written by Roy Thomas. Sal Buscema joined as inker for this issue. The story starts with winter in Nordheim. Conan has just slain a giant. The girl Moira lures Conan into ambush where he is taken prisoner by the Beast Men of Brutheim. Conan is sent to the arena to fight the snow-lion. A revolt of human slaves saves Conan who with Kiord the Thrall bring down the Beast-Men with a giant battering ram.

Barry Smith was in full Jack Kirby mode as the Beast-Men were drawn like something out of a Kirby comic.

The third and last story was Roy Thomas’ adaptation of Robert E. Howard’s “The Grey God Passes” as “Twilight of the Grim Grey God” (Conan the Barbarian #3, Feb. 1971). The Howard story has been posthumously reprinted in the Arkham House anthology Dark Mind, Dark Heart in 1962. Thomas used the story as means of getting Conan into the civilized Hyborian lands.

“I knew I was going to enjoy working with Howard’s prose, and I was committed to making it accessible to comic readers.”

Sal Buscema did the inking. The cover was based on a rough sketch produced by Marie Severin and completed by Smith.

Barry Smith’s art began to take on its own personality with plenty of detail. His Hyperboreans and Brythunians were drawn more as barbarians which is due to the source material of a fantastic retelling of the final dramatic showdown between the Irish and Norse at the Battle of Clontarf in 1014 A.D. The story makes for forceful reading though there is shoehorned feel. A more natural take would have had the Hyperboreans as medieval Russians and the Brythunians as Polish cavalry. No lack of clashes between the two throughout history.

The last page states “Don’t Miss Volume Two of the complete Marvel Conan—on sale now.” So, it appears the plan was to reprint all the Marvel Conan comic books.

The color reproduction to the Tempo Star paperbacks is excellent. Far better than the Dark Horse reprints decades later where the color coordinator was color blind.