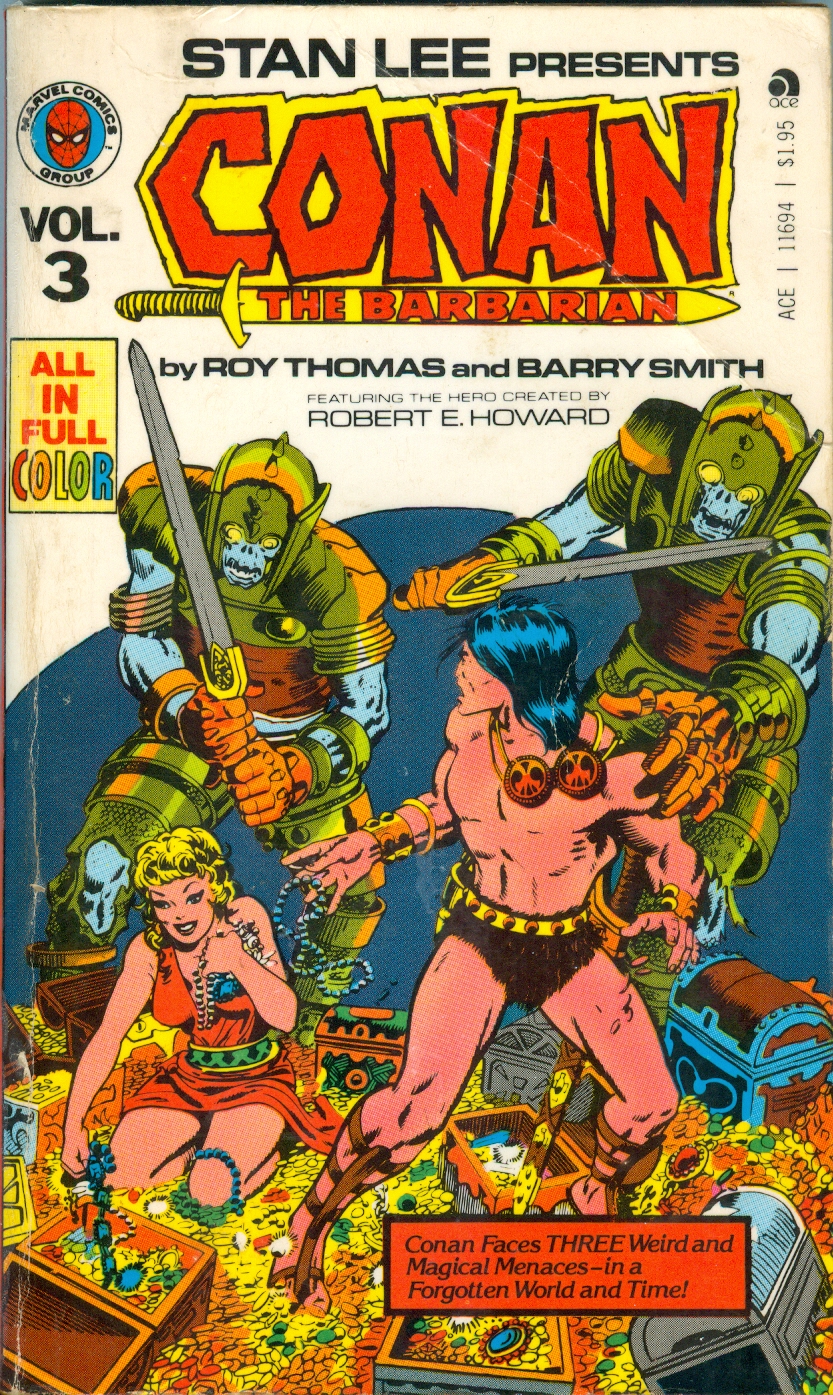 Volume 3 of Stan Lee Presents Conan the Barbarian is listed as having a key date of 3-10-1978 at comics.org. Roy Thomas said in the introduction to Vol. 3 that the vol one and two are on sale “simultaneously” as vol. 3. The copyright page has 1978 but nothing more specific as to month of release.  Roy Thomas devoted his two-page introduction to Glenn Lord and Barry Smith.

“Over the years, Glenn has been a great if largely unsung asset to all of Marvel’s various REH-oriented publications– supplying me with many previously-unknown stories by Howard (for incorporation into the Conan comic book legend), helping me locate a needed piece of Conan arcane, and generally being as helpful as humanly possible. I thought it was time I gave him his due in public.”

“Over the few years he worked steadily on CONAN, he evolved a style of comic art (one can hardly call it cartooning) which is bound to be remembered, discussed, and appreciated as long as people still collect comic books. And it looks as if that’s going to be a very long time, indeed.”

“The Lurker Within” reprinted from Conan the Barbarian #7 (July 1971) is the adaptation of Robert E. Howard’s “The God in the Bowl.” Thomas fleshed out the story with an opening act of Conan saving the haughty Lady Aztrias from a wolf pack attack. There is also a verbal altercation with Kallian regarding a cracked chariot wheel that Conan that drove Lady Aztrias into the city of Numalia. The story then goes into the Howard story. Roy Thomas embellished the final act with a climactic battle with the man-headed serpent.

“The Keeper of the Crypt,” reprinted from Conan the Barbarian #8 (August 1971) is the adaptation of the Conan fragment that L. Sprague de Camp turned into “The Hall of the Dead.” Roy Thomas tried to make a deal with de Camp regarding adapting his posthumous collaboration. As Thomas explained in Barbarian Life, just when it seemed a deal would be reached, de Camp would come back with another demand that would kill the deal. Thomas’ version was entitled “Keeper of the Crypt.” Thomas sets the story in Corinthia instead of Zamora. There is a flashback of Venarium as the commander of the soldiers tracking, a Gunderman, recognizes Conan. The creature hunting Conan looks like a giant gila monster. The Keepers of the Crypt distinctly look like something Jack Kirby would have drawn. Jenna from “Devil Wings Over Shadizar” makes an appearance in the last act.

Roy Thomas adapted “The Garden of Fear” for CtB #9 (Sept. 1971). Thomas added a first act of Conan and Jenna attacked by very primitive men. Barry Smith’s illustrations are top notch and lack the Kirbyisms of the previous Conan story.

One thing noticeable in this paperback is the amount of white space present between the panels. Goes to show the mass market paperback size was not optimum for reprint purposes.