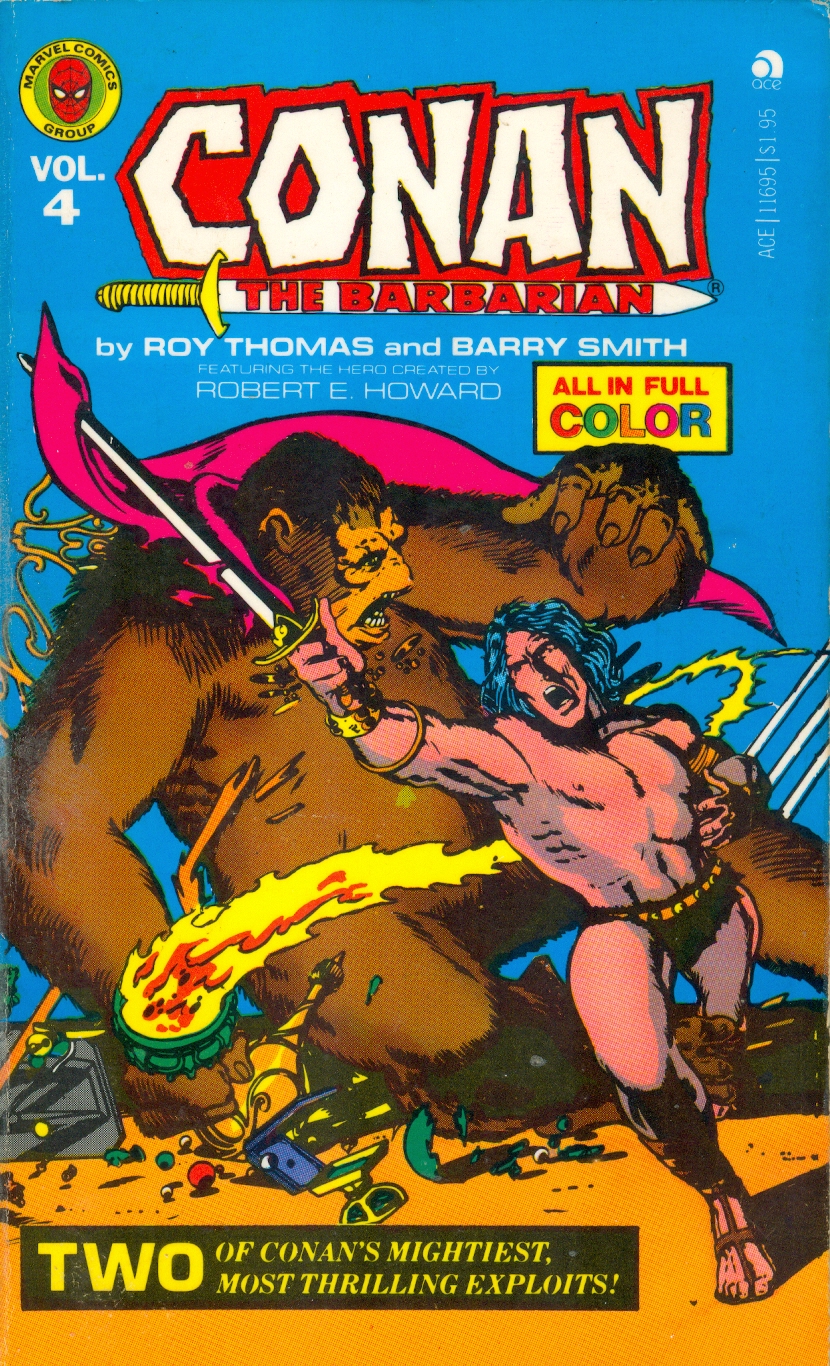 1978 was the high point of disco fever. You could not turn on the radio without hearing a song from the Saturday Night Fever soundtrack.

Luckily, comic book readers might find one of the Marvel Comics Conan the Barbarian reprint paperbacks. Vol. 4 would cost you $1.95. A key date of 4-10-1978 is given at comics.org. There was a good chance you could pick up the paperback at the grocery stores or even K-Mart.

`           Roy Thomas had a three-page introduction. He discussed the idea of a paperback comic book reprint. Readers had been sending letters that they missed out on the early issues. Thomas mentions Savage Tales #1 in good shape being sold for $50.00! Thomas gave a mini history of the pastiches in prose.

The first story is “Beware the Wrath of Anu” from Conan the Barbarian #10 (October 1971). Thomas created a story with Barry Smith from a throwaway line from the story “Rogues in the House” about a priest of Anu who doubled as a fence for stolen goods and betrayed a friend of Conan’s.

The story opens with Conan and Jenna entering the unnamed city. Thomas stated in the introduction that Jenna was a nod to the Mary Astor (“Brigid O’Shaughnessy”) character in The Maltese Falcon. Conan gets into an altercation with the city guards off the bat saving his former companion Burgun the Gunderman from “The Keep of the Crypt.”

Conan and Burgun engage in an aborted heist on Nabonidus the Red Priest. The priest of Anu betrays the thieves and Burgun is captured and hung. Conan plans on settling the score with the priest of Anu. The priest calls for the bull idol of Anu animated by a demon from the outer dark. Conan takes on the giant bull idol which has a rather confusing ending as the demon escapes to the outer dark. “Beware the Wrath of Anu” is an uneven story. There is some good hard-boiled plot going on. The climax for lack of a better word is “comic-booky”. The default climax with a giant monster is right out of any superhero in spandex comic book. Roy Thomas mentioned the Comic Book Codes authority was not happy that Conan was not punished for killing the priest.

“Rogues in the House” originally appeared in Conan the Barbarian #11 in November 1971. Roy Thomas added an opening scene of Conan’s capture by the city guard after Jenna sold him out. The story is well drawn by Barry Smith (with inking by Sal Buscema). There was some padding with an extended fight between Thak and the pet leopard. That was substituted for a gang of thieves intending on burglarizing Nabonidus’ abode massacred by Thak Thomas also changed the manner of Nabonidus’ death from a thrown stool to a thrown knife.