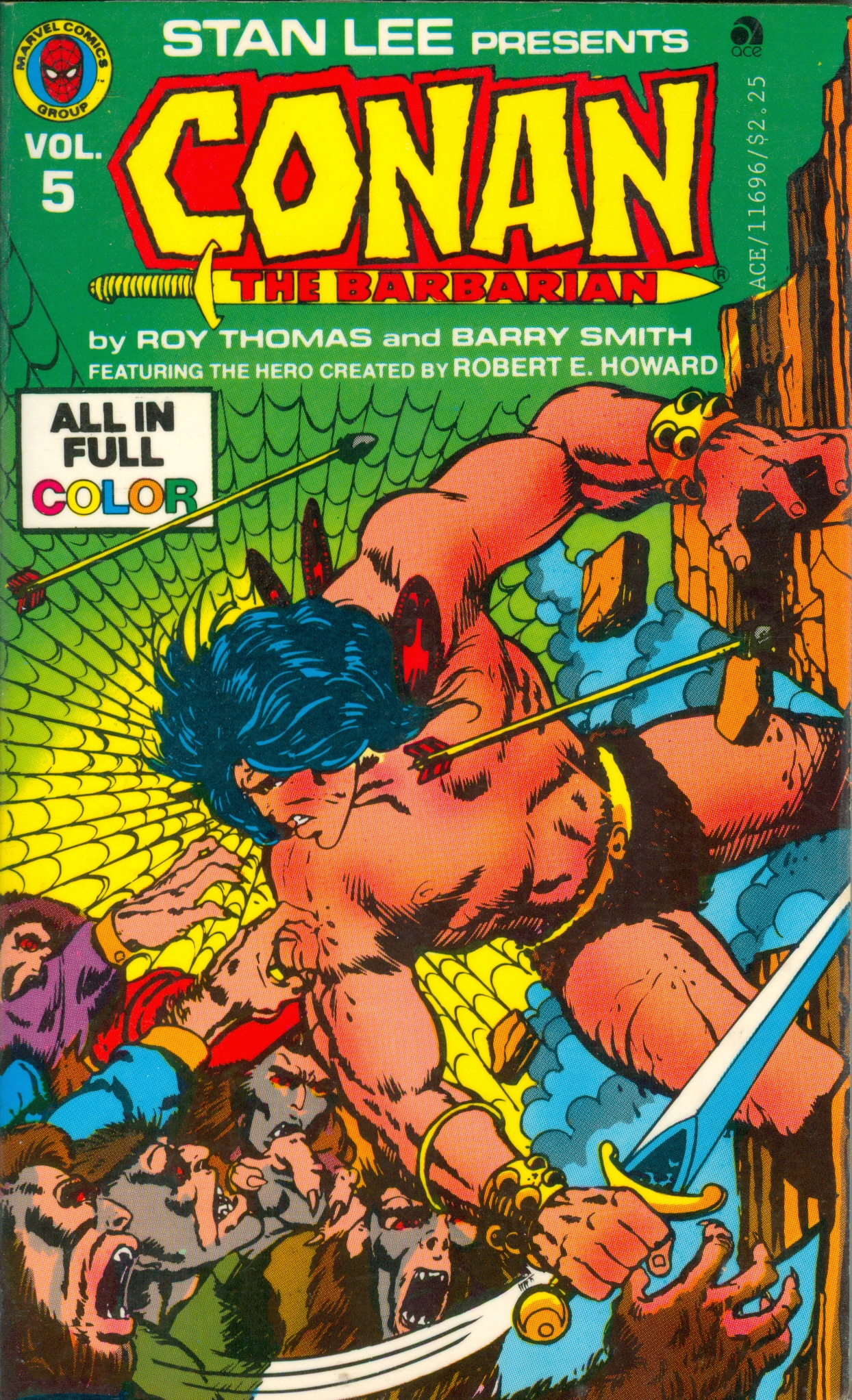 Volume 5 of Stan Lee Presents Conan the Barbarian contains a three-page introduction by Roy Thomas. He gives a chronology of Conan publishing. What is strange is he mentions the first three Temp paperbacks published simultaneously in February 1979, not 1978. Comics.org had a key date of 5-10-1978 for volume 5. Thomas also mentions 1980 as the projected date of release of the Conan movie.

“The Dweller in the Dark,” originally in Conan the Barbarian #12 (December 1971) is scripted by Roy Thomas, penciled and inked by Barry Smith, letters by Sam Rosen.

Synopsis: Conan becomes Captain of the royal guard in the small city-state of Zahmahn as well as the lover of Queen Fatima. When the Queen catches Conan with the servant girl Yaila in a delicate situation, she leaves them in the dungeon to be devoured by the Dweller in the Dark. They manage to escape, however, and Conan throws the Queen to the monster. According to tradition, Zahmahn can only be ruled by a female sovereign, so Conan nominates Yaila as the new queen.

The story is another big monster story. Barry Smith’s art continues to grow and dazzle.

“Web of the Spider God” (Conan the Barbarian #13, Jan. 1972) is based on a plot provided by John Jakes. Jakes is one of the last living writers to have started in the pulp magazines. He became involved in sword-and-sorcery fiction in 1963 when his character, Brak, first appeared in Fantastic Stories. Jakes wrote enough Brak stories and novel in the 1960s to take part in the sword-and-sorcery boom in the wake of the Lancer Conan paperbacks. He was lucky enough to have Frank Frazetta paint two of the covers.

Roy Thomas scripted the story based on Jake’s plot.

Synopsis: The story takes place in the desert east of Ophir. Raiders beset Conan, leaving him for dead close to the Zamoran border. Conan makes his way to the city of Yezud in Zamora. He becomes involved fighting the spider god of that city. Conan finds the man of many scars who left him for dead. The city of Yezud is destroyed by an engineer at the end. This would have made a decent pulp story thirty years earlier.

“The Frost Giant’s Daughter” originally appeared Savage Tales #1 (May 1971). It was reformatted for Conan the Barbarian #16 (July 1972). Roy Thomas adapted the Robert E. Howard story. The story takes up 34 pages. There are some famous Barry Smith scenes in this version. Roy Thomas went with the de Camp chronology of having Conan return from the civilized lands instead of placing it before “Tower of the Elephant.”

You all know the story “The Frost Giant’s Daughter.” The story has gotten commentary of Conan as rapist. This is ludicrous. Atali is a supernatural creature who lures men to their deaths. Her beauty is no doubt a mirage, glamour to attract victims for her brothers and father, Ymir the Frost Giant. The proper way to deal with Atali was put a wooden stake through her chest. The suggestion of rape is moralizing without figuring out what is front of the reader.

Notable with Vol 5 is the large amount of white margins. The mass market paperback just was not a good size to reformat the typical comic book.