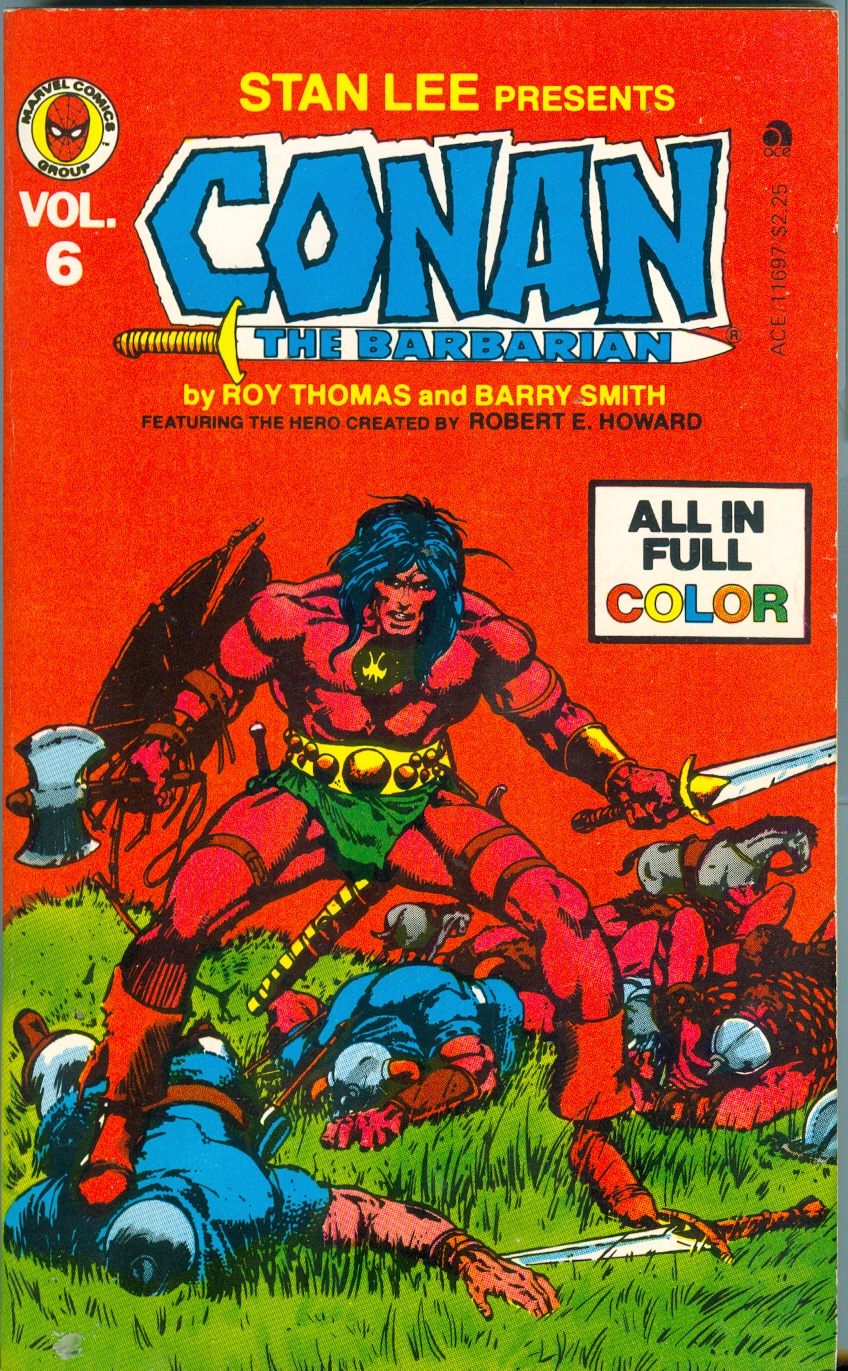 Grosset & Dunlap had released five Conan the Barbarian paperbacks in 1978. There was a gap of more than half a year before Volume 6 was released in early 1979.

Roy Thomas was back with an energetic three-page introduction:

“Conan is the most popular sword-and-sorcery hero in the world today. Period. . . Conan stands alone at the pinnacle – which somehow right and proper since it was Conan (along with Robert E. Howard’s earlier s&s creations Solomon Kane, King Kull, and Bran Mak Morn) who cast the genre in the precise mode it’s known for half a century now.”

Roy Thomas gives some space to Talbot Mundy and Fritz Leiber. He mentions Jane Gaskell’s “Atlan” books perceptively describing them as “a gothic-romance version of sword-and-sorcery, no less.”

This leads into two pages on Michael Moorcock’s Elric and how the Conan-Elric crossover in Conan the Barbarian came to happen. He did give a mea culpa for the pointy hat that Elric wears in the comic stories.

“A Sword Called Stormbringer” is from Conan the Barbarian #14 (March 1972). Michael Moorcock and James Cawthorn provided the plot. Roy Thomas scripted the story, Barry Smith provided the art, Sal Buscema inked. Michael Moorcock may be the most significant writer of sword-and-sorcery fiction of the 1960s when the genre arose like a phoenix from the ashes. Moorcock and Cawthorn had written an Elric story “Kings in Darkness” that originally started as a Conan story.

Synopsis: Conan intervenes in the pursuit of a girl by hooded men riding beaked horses. She is Zephra, daughter of Zukala. Zukala is now an old man bereft of sorcery. He convinces Conan to go on a quest in return for an enormous amount of gold. Kulan Gath, a rival sorcery or Thoth Amon is involved with the gods of Chaos from Elric’s world. Kulan Gath plans on reviving Terhali, a dead sorceress of Melnibone. Conan and Zephra go to stop Kulan Gath from reviving Terhali. Conan meets Elric with some sword play at first but they become allies fighting the Chaos pack. Zephra summons a rain storm that melts the enemy at the moment they are about to overwhelm Conan and Elric.

“The Green Empress of Melnibone” originally appeared in Conan the Barbarian #15 (May 1972). It is a direct continuation of “A Sword Called Stormbringer.”

Synopsis: Conan and Elric have an un-easy truce while they ride to the sunken city known as Yagala. Once there they have to face Xiombarg, Prince Gaynor the Damned, Kulan-Gath and Terhali. When their combined power is not enough to defeat them Arkyn, Lord of Law must join the fight to help them. Arkyn infuses Zephra with supernatural power to defeat Terhali. Zephra defeats Terhali but does not make it. The story ends with Conan delivering her body to Zukala.

This two-part story is very freaky-deaky and very much a product of its time. The deus ex machina resolution is all very Marvel Universe superhero hokum.

“The Hyborian Age” is a graphic adaptation of Robert E. Howard’s pseudo-history for his fictional creation. This is from Conan the Barbarian #87 (June 1978). Script by Roy Thomas, Pencils and Inks: Ernie Chan. Lettering: Glenn Simek. I rather like the art for this. It is very much compressed having run for only 6 pages but gives some of the sweep of Howard’s vision.

“The Blood of the Dragon” is a tale of the Hyborian Age originally from Conan the Barbarian #12 (December 1971). Story by Roy Thomas. Art by Gil Kane. Kalligor of Poitain is a vainglorious knight in the time of King Numedides. The local baron’s son rides out to battle the Hydragon. He does not return and Kalligor has a plan to defeat the Hydragon and become the heir to the barony. Thomas has a twist at the end of the story.

Volume 6 would prove to be the last mass- market paperback reprinting Conan the Barbarian. The last page had “Don’t miss Volume 7. On sale in February.”

The coloring was awful for the cover. Way too much red of one shade! The interior was to the level of the other volumes. There is the recurrent issue of formatting frames within the mass-market paperback. It is a format that is not ideal.

A friend of mine contacted Roy Thomas and asked about the Tempo paperbacks. He replied that sales were not that good playing a part in the series not continuing. So, you have an historical oddity from the peak of the mass-market paperback era.