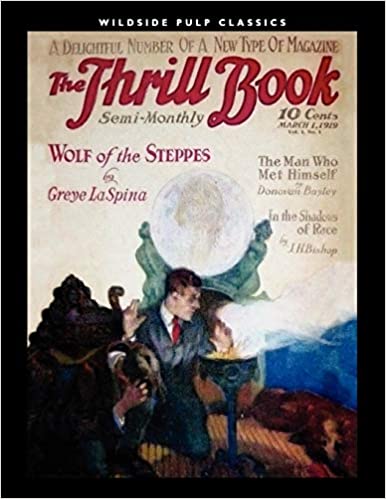 Although the 1920s would be the Golden Age for genre pulp fiction, even in the 1910s publishers were already searching for outlets to publish the strange, the weird, and unclassifiable. Anything from science fiction, fantasy, to chinoiserie, yellow peril, and the first hints of weird menace. After all, the 1910s were the decade of Fu Manchu, occult detective Semi Dual, Tarzan and Sir Arthur Conan Doyle’s The Lost World, and the dark terror of the criminal mastermind Fantômas. But some stories were a little too undefined, too weird for the pages of respectable pulps such as Argosy, The Blue Book, or Adventure.

So, in 1919, publisher Street & Smith (now better known for The Shadow, Doc Savage, and Astounding Stories) took a risk and bundled their unclassifiables into a new book, The Thrill Book. A regional magazine, The Thrill Book started as a dime novel before settling into the pulp format. It would be a short experiment, 16 issues across eight months, and not without frustration, seeing an editorial change in the middle of its tenure. The Thrill Book would pave the way for Weird Tales and Amazing Stories, the first science fiction and fantasy genre magazines, but was still too general in content to claim the title of The First Weird/Fantastic Magazine.

The first magazine featured the first supernatural tale by female author Greye La Spina, “The Wolf of the Steppes”. La Spina would continue to write for The Thrill Book before becoming a regular contributor to Weird Tales. And she was not alone. Seabury Quinn’s assistant to occult detective Jules de Grandin, Dr. Trowbridge, first appeared in the dime novels. Poetry from Clark Ashton Smith appeared, as did stories by Sophie Lousie Wenzel (better known in Weird Tales as Sophie Wenzel Ellis). Prolific writer and inventor Murray Leinster, best known for his later science fiction stories such as A Logic Named Joe, appeared here as well, contributing “A Thousand Degrees Below Zero” and “The Silver Menace”. Francis Stevens would pen one of the first alternate universe stories in her “The Heads of Cerberus”, transporting her characters to a future totalitarian Philadelphia. Perhaps the best known writer is H. Bedford-Jones, a prolific and popular adventure writer who would dabble in every genre available. Bedford-Jones would use The Thrill Book to tell tales of opium ships, of yellow perils, and more settings too strange for his usual home, The Blue Book. Like La Speya, Bedford-Jones would appear again in Weird Tales.

The Thrill Book is remarkable for both its relatively heavy female authorship and its future Weird Tales alumni. But the lasting influence of The Thrill Book was felt for decades after it was shuttered for poor sales. The editors collected quite the backlog of submissions intended for future issues that were never made. These stories languished in the archives for years, with a slow leaking of stories into Argosy, Weird Tales, and even the hero pulp The Avenger. These stories, written in 1919, remained relevant and timely into the 1940s. But the vast majority of stories, including several by Francis Stevens, remain unpublished to this day, despite several attempts to revive The Thrill Book.

A regional distribution made The Thrill Book one of the rarest of the notable weird pulps. However, a couple reprints were made in the 2000s, returning two of the 16 issues to circulation and restored glory. And while The Thrill Book does not unseat The Unique Magazine for the title of first, its place in the annals of the weird is assured.