The Trial of Roger Stone

THE TRIAL OF ROGER STONE 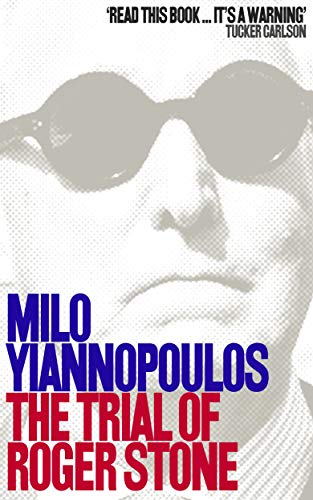 “Read this book. It’s a warning of what can happen when politics infects our justice system.”
— TUCKER CARLSON

“There’s no better guide through the mistrial of Roger Stone than courtroom jester Milo Yiannopoulos. For once, the only thing he leaves naked is the truth.”
— JACK POSOBIEC

“The Trial of Roger Stone should be an alarm bell for conservatives. What happened to Mr. Stone happens every day to ordinary Americans. We do not have a rule of law. We do not have fair judges. We have jack-booted thugs kicking down doors with the approval of prosecutors in robes.”
— MIKE CERNOVICH

“Roger Stone has never sounded so sympathetic and likable. Will he ever forgive Milo for the portrait?”
— VOX DAY

The Mueller Report was a catastrophe for the malevolent forces desperate to impeach President Donald Trump. It failed to prove any collusion between the Trump campaign and Russia. Since then, many of the President’s former advisors and associates have been subjected to vindictive, political prosecutions for a variety of trivial, unrelated offenses. Roger Stone is one of them.

In this moving, eyewitness account of Stone’s trial and his decades-long career of political chicanery, author and Stone intimate Milo Yiannopoulos introduces America to the man behind the myth–and explains how the biggest stitch-up in modern judicial history unfolded. He offers a plea to President Trump to step in and do the right thing, and finally, he explains how we can prevent such grotesque injustices from happening ever again.

“This book is really good; it is more than a good book, it is an important book that will serve future historians well in understanding the state of the present-day USA. As Milo himself told me, it is one thing to conceptually understand the corruption of the U.S. legal system, it is another to observe that corruption in action, day after day, live and in person. Despite being reasonably well-informed and a confirmed skeptic of the U.S. justice system, until reading this book I had no idea that the trial of Roger Stone was such a charade, to such an extent that the shamelessness of the clowns responsible would have embarrassed the average Communist judge conducting Soviet show trials during the Stalinist era.”–Vox Day

EXCERPT: As a former senior editor for Breitbart, a New York Times-bestselling author and an international political celebrity and free speech icon, I’ve heard my share of so-called conspiracy theories. I’ve heard conservatives talk endlessly about double standards and unfair treatment. I’ve listened as Republicans have complained about how they’re regarded versus their Democrat peers. Most of the time, the conservatives are right. Almost all of the things they claim are true! Wait long enough and the things you hear on conservative talk radio generally prove to be pretty much spot-on. These revelations have come thick and fast in the past half-decade, because the Trump presidency has exposed collusion, cronyism and entrenched bureaucracies in the federal government at a scale that has stunned most Americans.

But never in my life have I sat in a courtroom and watched a put-up job unfold before my very eyes, and experienced a chill creeping down my spine as I slowly come to realize the terrifying power of a team of government lawyers determined to take someone down, whether they committed a crime or not, and how the full might of the American jurisprudential system kneels to accommodate them.

In November 2019, Roger Stone was found guilty of one count of obstruction—that is, of lying to Congress during an investigation—five counts of making a false statement to the government, and one count of tampering with a witness. Of all these charges, the last is the most preposterous. But none of them should ever have been brought against him.

THE TRIAL OF ROGER STONE is available in Kindle format on Amazon, in paperback at Castalia Direct, and in EPUB and Kindle format at Arkhaven.