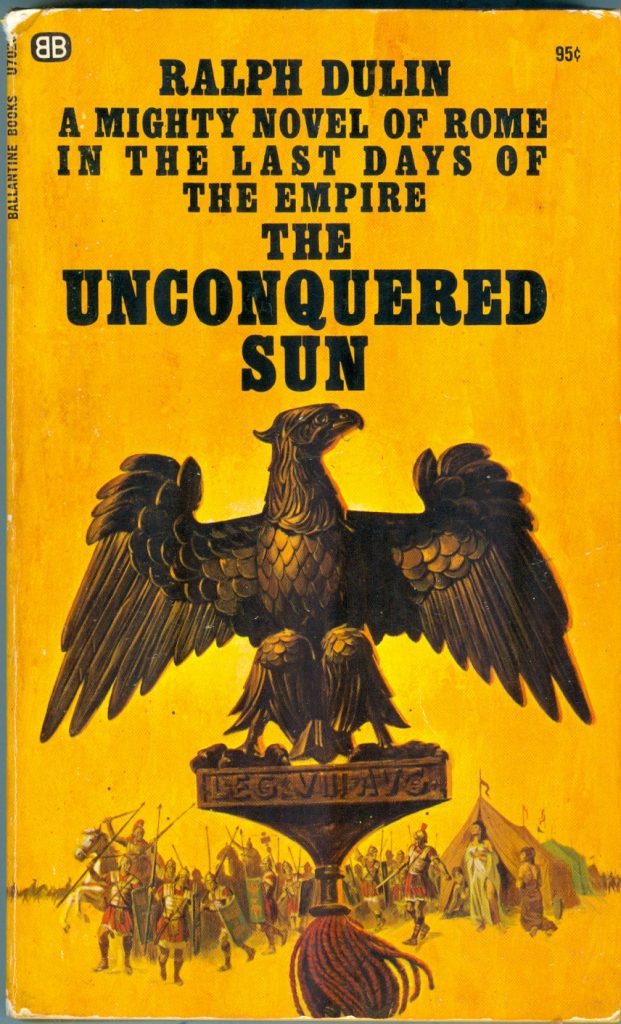 Novels set in the Roman Empire are popular, generally the period of the Julio-Claudian dynasty including Tiberius, Caligula, Claudius, and Nero. There are novels about Constantine and two about Julian the Apostate that I can think of off hand.

I came across a novel about the Roman Emperor Aurelian, The Unconquered Sun. The average person probably has no idea that the Roman Empire almost went under in the Third Century A.D. Things became unstable with accession and then assassination of Commodus, son of Marcus Aurelius. There was a series of emperors, many reigning for a short time, often two years. Historian Adrian Goldsworthy’s opinion is Rome fell due to constant civil wars with one general after another proclaimed as emperor and then marching their legions from the frontier to the capital.

What saved Rome was a series of soldier emperors who hailed from Illyria. Illyria is roughly what we knew as Yugoslavia. The Illyrians were a tough hill people who made good soldiers as hill men often do. These soldier emperors put Humpty Dumpty back together again the latter half of the 3rd Century.

I spotted Ralph Dulin’s The Unconquered Sun in March while stopping at a local used bookstore. You don’t see novels set in this time period and decided to give the novel a try. Who is Ralph Dulin? A search at Bookfinder.com revealed only The Unconquered Sun. That indispensable research tool, the Fictionmags Index showed nothing by Dulin.

MacMillan published the hardback in 1962. Ballantine published the paperback in 1965. This is not a short novel clocking at 506 pages. Interesting to look in the back of the book and see advertisements for historical novels by Lawrence Schoonover, Zoe Oldenbourg, Winston Graham, Robert Lund, and Elizabeth Byrd.

The novel starts with the arranged marriage of a Roman senator’s daughter, Severina to the Illyrian born general Aurelian. The marriage is to strengthen a faction of senators’ position to the ever increasingly important Illyrian army officers. It is not known if Severina was from Dacia or from Rome. The novel is mainly through her eyes.

Aurelian is something of an opaque character in the novel. There is discussion of theology and Christianity with some other Roman officers early in the novel. Severina also has interactions with Christians and develops a friendly attitude towards them.

About three quarters of the novel is about Severina and her dealings with household slaves, her father, and occasional interactions with the future Roman emperor Gallienus.

There is battle with Goths who crossed the Danube. Latter in the novel there is a section wherein now emperor Aurelian is chasing and trying to bring to battle a horde of Germanic Allemanni who broke into northern Italy. No anachronistic military mistakes jumped out at me. The novel even has the future emperor Gallienus pushing for heavy cavalry as the main striking force of the Roman Army and a move away from the heavy infantry of the Roman Legion.

Aurelian’s campaign in the East against Zenobia and her short-lived Empire of Palmyra is given short space in the novel. This really surprised me. Zenobia is one of the most fascinating characters of this period. Aurelian’s campaign against the also short-lived Gallic Empire is given even less space. The reason for his assassination is relatively well done. The ending is very interesting. Dulin has a fictitious bastard child from a Gothic princess that Severina adopts afterward and moves to Spain for his protection.

This is a strange novel with some well-done battles and lots and lots of domestic dialogue. Dulin was an amateur with one novel in him. A professional writer would have tackled this book differently. Aurelian would have been imbued with some sort of personality. Unless you are a huge fan of the Third Century, you can safely skip this one.