The Unique Legacy of Weird Tales

A new book of essays was released on October 1st. The Unique Legacy of Weird Tales is the last of Rowman & Littlefield’s Studies in Supernatural Literature volumes. Sunand Tryambak Joshi was the editor of this series that made it to seven before getting the headman’s axe for poor sales. Joshi stated he 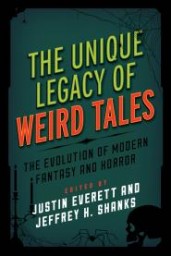 had no interest in doing more popular writers such as Stephen King or Dean Koontz. The series might have lasted longer had he done so.

The books in the series include:

These books go for $80.00 a piece. I doubt local libraries are going to have these in the catalog.

The contents for The Unique Legacy of Weird Tales include:

1. “Something That Swayed as If in Unison”: The Artistic Authenticity of Weird Tales in the Interwar Periodical Culture of Modernism- Jason Ray Carvey
2. Weird Modernisms: Literary Modernism in the First Decade of Weird Tales– Jonas Prida
3. The Lovecraft Circle and the “Weird Class”: Against the Complacency of an Orthodox “Sun-Dweller”- Daniel Nyikos
4. Strange Collaborations: Weird Tales’s Discourse Community as a Site of of Collaborative Writing- Nicole Emmelhainz
5. Gothic to Cosmic: Sword-and-Sorcery Fiction in Weird Tales– Morgan T. Holmes

Part III: Masters of the Weird: Other Authors of Weird Tales

The contents range from sub-genre surveys to literary theory academic wankery. Some of the literary theory essays may not be to everyone’s taste but hopefully the reader may get a take home point or new piece of information. My essay covers the evolution of sword and sorcery fiction in Weird Tales which started out as gothic stories with swords and evolved into its classic form due to the influence of H. P. Lovecraft’s cosmic horror. This is the first academic book on Weird Tales that I am aware of.