This is not the Fritz Leiber you’re looking for.[1]

Apparently, Fritz Leiber Jr. – born December 24, 1910[2] – is an unknown science fiction author among modern readers, at least according to this io9 article from several years ago.

Noted contemporary Poul Anderson was quoted as having said that in the late 30s and 40s Leiber was writing “a lot of the best science fiction and fantasy in the business.” [3]

He was prolific, amazingly vivid in his writing, and active almost right up to his sudden death in 1992.  While many of his most prominent contemporaries passed away before “the Great Delisting” Leiber spanned the gap, and more importantly was beloved by fans for his skillful public persona (no doubt dividends of his past on stage[4]) and his habit of engaging personally with fandom – indeed, in addition to receiving many different fan awards over the years he was a participant in groups such as Hyborian Legion and LASFS, contributed to fanzines (Vorpal Glass, Amra).  So why is he not as prominent today as he might deserve?

I think one of the comments on that io9 piece more or less explains it – Grglstr writes:

“I think he’s not as well known by the kids today because most of his best work is in short story form, and people haven’t quite figured how to peg him in either SF, Fantasy or Horror, because he excelled in all three. “

I say more or less, because I think Grglstr[5] misses an important point: that this division between SF, fantasy, and horror is really a fairly recent thing that was only just starting to congeal in the late 70s, in part thanks to Don Wollheim’s success[6] – many of the writers of Leiber’s generation regularly mixed together elements of what we would now call science fiction, fantasy, and horror.  It still happens of course, but it often causes comment – even by the late 80s and early 90s, work by writers like Celia S. Friedman[7], whose blending of a SF past (interstellar colonization) with fantasy themes (magic! vampires!) in her Coldfire Trilogy left many of my friends scratching their heads.  Is this SF? Is it fantasy?

But take things back a decade or two (at least) and this kind of category bending wasn’t really all that unusual – in fact, I wonder if Leiber’s SF and horror riddled “sword and sorcery”[8] isn’t sort of the other side of the coin from Leigh Brackett’s planetary romances – in the former, a familiar fantasy is spiced with dashes of SF and a frisson of horror, while the latter takes something that is ostensibly SF and makes the colours bolder by applying a veneer of archetype fantasy.

To be fair, though, Grglstr[9] has a point – a huge proportion of Leiber’s work is in short form, which sadly doesn’t have the shelf-life of novels and is also an under-appreciated art form in the current era.  This does make it more challenging for new readers to really see him shine, despite the excellent anthologies that have been published over the years.

A small subset of potential fans will be familiar with Leiber mainly through his Fafhrd and the Gray Mouser stories, which earned him a healthy stipend in his later years, owing to RPG giant TSR paying residuals for the rights to use the Lankhmar setting and certain eponymous characters.  But despite the enormous popularity of this flavour of sword and sorcery story among fantasy gamers, I wonder how many realise that these stories were written by Leiber over a span of 50 years, printed and reprinted in periodicals and anthologies for various generations of readers?

And why is it these stories in particular that have been remembered when the man has a dauntingly long bibliography and there are so many other great stories in Leiber’s canon? (dare I say greater?)

I wonder if it’s a combination of factors:

Could it be that the result has been that Leiber has been unfairly recast as a “one trick pony”?  If so, it’s a dreadful shame.

The io9 article mentions Our Lady of Darkness (1977)[10] which is indeed an excellent book, but let’s not forget Leiber’s first ever book in print: Night’s Black Agents (1947) – while this is actually a collection of shorts, I think that along with a later collection A Pail of Air (1964)[11], a good Fafhrd collection, and Our Lady of Darkness we get to see the full scope of Leiber’s amazing range.  Oh, he has had some flubs – who could fail to, considering how prolific he was?  But make no mistake that there’s far more gold.

Leiber is one of those under-re-printed (is that a word?) authors, and I’m very glad to see that in the last few years since the offending io9 article some new editions of his work are seeing the press again – it’s always been fairly easy to find a new edition of the Lankhmar stories, but to be honest I don’t think the Fafhrd tales are really where he shines.

Leiber’s writing has a fine sense of timing and poise – a skill that perhaps he learned from his time on stage, and which I’m sure served him well in the pulpit.  He was beloved of many while he was alive, and I can hardly believe that he could be characterized as “the least known SF author you need to know.”  This is the man who, after a lengthy dry spell, came back to publishing welcomed with an entire F&SF issue devoted to his new stories[12] (July 1969) and an enormous outpouring of appreciation from fandom.

I think that the SF&F world lost a bright star when Leiber passed in 1992, and I look forward to re-reading quite a bit of his work over the coming months, for which I’m sure Amazon will be thankful.

By the way – THIS is the Leiber you’re looking for, and one of my favourite photos of the man: 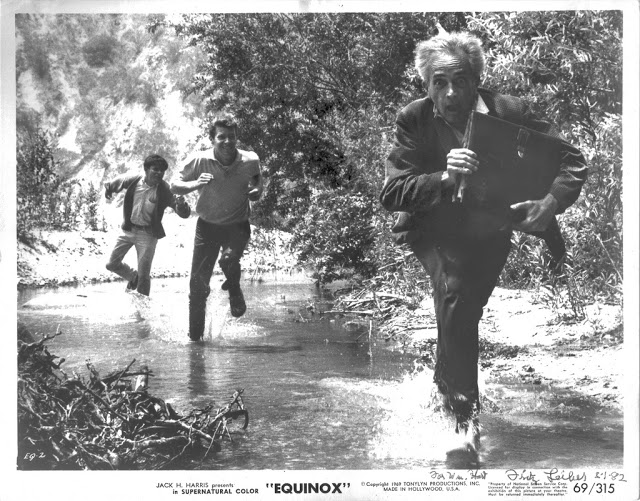 I think this image says more about the man than any of the words I put before it.

[1] But it is a Fritz Leiber – Senior, rather than Junior played Caesar with the Three Stooges in Cleopatra (nyuk nyuk nyuk!).  Junior, the subject of this post, was also an actor (unavoidable, having been raised among such unsavory sorts) and in fact not only appeared with his father in Camille (1936), The Great Garrick (1937), and The Hunchback of Notre Dame(1939 – uncredited speaking part) but toured with his parents – who were noted Shakespearean actors in addition to his father’s extensive film credits – in 1928 and again in 1934, and returned to the screen in Equinox (1970) and The Bermuda Triangle (1979).  This last is an odd addition, as it’s a documentary but Leiber’s role is a dramatic one.

[3] I have seen this quote bandied about, and had to do some digging to confirm it, but it appears to be from Anderson’s introduction to The Wizard of Newhon: The Best of Fritz Lieber (1974: Doubleday). I’m still seeking confirmation from someone who actually has a copy of this book in front of them if anyone cares to assist? Assuming anyone reads these footnotes of course, which I write mainly as an amusement for myself.

[5] Dear lord, what are parents thinking these days when they name their children?

[7] Another under-remembered and underappreciated author who spanned the Great Delisting, who I think I will cover in a later post as well.

[8] A term he’s actually credited with coining in his correspondence with fanzine Amra, in a response to Moorcock’s demand for a term in 1961.

[9] No, really – what were they thinking!? Buy a vowel for goodness sakes!

[11] I have a particular fondness for the titular story “A Pail of Air” since I clearly remember reading the story years and years (and years) ago, but more recently came across the radio play adaptation in an archive of the excellent Galaxy Magazine sponsored series X Minus One (listen here!) as I was exploring the classics.  If, like me, you have limited time to actually sit and read, but have lots of time when you could listen, I heartily recommend the many collections of pulp era radio adaptations available online!

[12] July 1969 – and my how that magazine has changed. It’s hard to imagine someone with Leiber’s bibliography getting that kind of re-welcoming today.