The Valdemar Legacy and Lovecraft 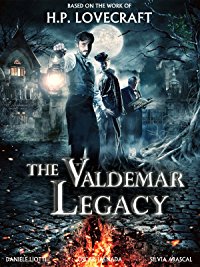 When The Valdemar Legacy showed up on Amazon Prime, I had give it a go. With “Based on the Work of H. P. Lovecraft” emblazoned across the top of the movie poster, I simply had to know. How much of Lovecraft’s approach to fantasy managed to get incorporated into this thing…?

The answer is… not much. Though it maybe does better than something like the Hellboy movie.

It’s an enjoyable film, don’t get me wrong. Spain has some seriously good looking people that they can tap for this sort of project. They have a strong concept of style, dash, and charm. And the repartee…? It’s catchy and fun with just the right amount of sizzle. It’s enough to make me wish they’d tried their hand at channeling A. Merritt because so few people seem to grasp this sort of thing these days.

What parts of Lovecraft do they get right…? Well they cover the weird geometry, like most people do. And uh… there’s a computer graphics Cthulhu-looking dude you see for a moment in the preview for the next installment. And… uh… oh yeah, there’s a reference to the Dunwich Horror.

One of the things that made Lovecraft what he was was the reference points he used. In order to convey anything strange, he would invoke authors and painters of his time that he was in conversation with. Instead of those, we get cameos from historical figures and events: Aleister Crowley, the suffragettes, Bram Stoker…. It destroys the creepy “New England Gothic” feel of his work. And having a celebrity like Crowley provide the ritual that sets everything in motion (as opposed to some random redneck family) takes away from the sense that this weird, awful stuff could happen anywhere or anywhen.

The opening vignette is some first rate horror, though. The suspense is pitch perfect. My one complaint is that the creators fall prey to the same affliction that strikes most contemporary storytellers: they feel justified in stopping the story in order to explain everything in more detail than you want to know.

If I want to watch a film about some awful Lovecraftian horror… then just give me the story about the Lovecraftian horror. And for Crom’s sake, don’t make the people in the distant past that are responsible for making it happen human and sympathetic and likable. Make them tragic, sure. Let us know they’re there. But mostly… we only need just enough backstory to help us make sense of what’s happening. Anything else kills the plot for no good reason. And of course, with a good Lovecraft story… it’s always the part that got left to your imagination that really completes the effect.

Okay, maybe the things that make Lovecraft so distinctive won’t translate to film all that well to begin with. I couldn’t say. And sure, a story-within-a-story can maybe even work, too. Lovecraft even did it himself on occasion. What he wouldn’t do is just explain everything up front and kill the sense of suspense and forward motion in the process.