The Word Reclaimed, by Steve Rzasa 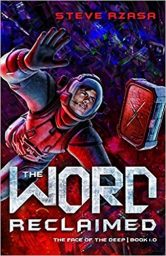 Like so many science-fiction and fantasy readers these days, roping back into modern works took some doing.  Steve Rzasa’s writing was one of the things that helped steer me back into reading contemporary science-fiction and fantasy.  His Hugo nominated Turncoat provided the proof of concept that these Rabid Puppy maniacs maybe had a point, and his work with Vox Day on Quantum Mortis proved that the world of sf/f wasn’t entirely lost.  Three years and a lot of great books later, The Word Reclaimed provided me with yet another pleasant surprise.

With a cover and title like this, it’s a safe bet that what you are about to read will be heavy on the Christian themes.  In a perfect world that’s all that you would need, but alas, many middling writers (and middling Christians) have used heavy Christian themes as a marketing gimmick to drive up sales for a book that would not sell well if it relied solely on its Churchian theology or poor writing.  Such was my own trepidation on starting this book that it was only my previous exposure to Rzasa that allowed me to set aside my doubts and give it a shot.

I’m glad I set those doubts aside, because Rzasa delivers an action packed interstellar romp built on a Christian foundation, but one that offers more than comforting warm fuzzies for the faithful.  In The World Reclaimed, the galaxy has moved beyond such petty concerns as man’s ultimate purpose in life and the pursuit of eternity to focus on important matters like money and power.  At least, the powers behind the throne have done so, and they have built a large and not-so-secret police to ensure that the hokey religions of the past stay in the past.

Which they generally do outside of a few rebellious systems and secret cults, at least until a young man named Baden recovers an intact bible from the wreck of a ship destroyed by the aforementioned secret police.  The bible becomes the classic MacGuffin that must be protected by Baden and the others on the ship in which he serves.  Those others include a father who is close to Baden, but struggling to relate to him, and his rag-tag crew of smugglers and salvagers.

The action ratchets up a notch as a rebellious collection of systems throw off the secular humanist style religion that the imperial powers demand their citizens practice, and the galaxy drives headlong into a widespread war.  The point of view shifts to another young man, a nobleman from a family of mech-pilots and naval officers tasked with serving the Empire in putting down a rebellion that they almost sympathize with.

It’s worth noting that the Christians in this narrative are not the only ones trying to regain what they’ve been denied by the secular authorities.  As a far-flung future, surviving adherents of other religions make appearances, some of whom are also actively pursuing their own lost religious traditions.  As was historically the case when murderous secular regimes tried to quash religious thought, the oppressed religious devotees make for strange but effective bedfellows who help each other out in solidarity against their common secular enemies.  That’s a nice touch that helps add weight and authenticity to the future presented in The Word Reclaimed.

The story moves along at a good clip, and the Christian themes generally weave through the narrative as an excuse for the action.  The outright mystical and divine intervention stays low-key even as it motivates the characters for much of the story, providing just the right amount of grounding in Christian thought without ever distracting the reader by tipping over into outright preachiness.  In many ways, Rzasa’s deft touch reminds me of John C. Wright in the way he infuses his writing with discussion of religion in general and Christianity in particular with a naturalness that never feels forced or obtrusive.  God exists.  He works in mysterious ways.  That’s the natural order of things.

After reading so much material where religion and its role in the life of humanity is ignored, if not outright rejected, it feels good to read a work where this fundamental aspects of life as it is lived by real people is given a natural place in the story.  The Word Reclaimed never quite rises to the entertaining heights of the other Rzasa works that I’ve read, but it’s still and enjoyable space opera that’s well worth a look for those looking to inject a little more Christianity into their sf/f reading pile.