The Year of the Horsetails 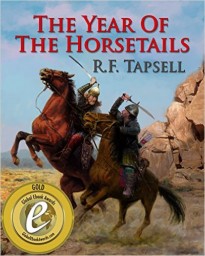 R. F. Tapsell’s The Year of the Horsetails is the greatest novel you have never read. It ranks probably in my top five favorite novels alongside The Hour of the Dragon, The Broken Sword, and Eagle in the Snow.

I first heard of it in a book review by L. Sprague de Camp in an issue of Amra. He complained of the military aspect to the novel. Well, that would make sense as R. F. Tapsell (1936-1984) had served in the Royal Air Force as a Russian translator for intelligence. He had a B.A. from the School of Slavonic and East European Studies at London University.

Tapsell wrote three historical novels and one non-fiction book on European royal dynasties. The Year of the Horsetails (1967) was his first novel. It is set in Eastern Europe at the juncture of the Eurasian steppes and the Carpathian Mountains.

The time is somewhere in the early Middle Ages, probably between 700-900 A.D. The Slavs have expanded from their birthplace of the Pripet Marshes region. The Germanics have vacated Eastern Europe in the folk wandering. The Byzantines are mentioned. The Magyars had not arrived yet.

Tapsell has the time deliberately vague. If you have ever read Harold Lamb, especially the excellent March of the Barbarians, you know that Eastern Europe was buffeted by waves of Turco-Mongol steppe nomads over the centuries. This novel is almost historical fantasy though no supernatural or magical elements are present.

This is a novel of genocidal warfare. The Turco-Mongol Tugars raid an area, virtually depopulating the native population. Those not killed are sold in slave markets in Central Asia, probably to the Moslems.

The novel starts with Bardiya escaping from the Tugars. He is a chieftain of the Sakas, an Aryan people tributary to the Tugars. He takes refuge with the Slavic Drevich tribe. He warns the Drevich that the Tugar are coming their way like an avalanche and attempts to aid in preparation.

There is a great battle sequence showing how infantry armies would lose to steppe nomad horse archers. A portion of the book is dedicated to an epic siege, one of the best I have ever read.

The climax is exciting and satisfying. This book keeps you turning the pages. 5 of five rating.

There was a paperback edition from Berkley in 1968. I have never seen a copy at a used bookstore. It does show up on E-bay once in a while. Luckily there was a reprint edition in 2013. Amazon has a Kindle edition for $2.99.

Tapsell’s other two novels are about the Greek Islands after the Fourth Crusade (The Unholy Pilgrim) and a novel about Darius and the Persian Empire (Shadow of Wings). All are worth reading.