There is no SF – only Zuul 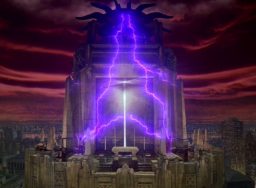 I’m not particularly interested in joining the recent brouhaha over genre, but it seems to me that there’s an elephant in the room that I need to point out.

OK, now that I have the shocking revelation out of the way I suppose I should explain where I’m coming from, what led me to this idea, why it’s not quite what it seems, and why I’m starting to take it seriously.

In this year, a little book with an outrageously long title was published in London by Darton & Co. – A Little Earnest Book upon a Great Old Subject – With the Story of the Poet Lover by the poet and critic William Wilson, who had earned himself some notoriety in Hood’s Magazine[1] and in a few previous volumes of literary commentary. Much of Wilson’s work is of limited interest for discussion here, but in chapter 10 Wilson neatly coins the term “Science-Fiction” right in the opening paragraph[2] – and provides us with this mission-statement for it in the second:

“Campbell [not John Campbell of SF fame] says that “Fiction in Poetry is not the reverse of truth, but her soft and enchanting resemblance.” Now this applies especially so to Science-Fiction, in which the revealed truths of Science may be given, interwoven with a pleasing story which may itself be poetical and true – thus circulating a knowledge of the Poetry of Science, clothed in a garb of the Poetry of Life. The influences of Science inter-penetrate the whole Earth, breathing eloquently through the framework of Creation.” (emphasis added)

He goes on in his discussion of the wonders of science, remarking that “the Magnetic Needle…has more magic about its reality, than the wildest creations of child-fiction have in their ideality” and otherwise bubbling enthusiastically about both the emerging technologies of the future and the place fiction has in acquainting the public with them.

If this sounds familiar, hang on to your hat while we fast forward to 1926.

Wilson’s term didn’t really catch on, though the idea did – at least among authors such as Jules Verne and Herbert Welles, to name just two of the best known. In fact, by the end of the 19th Century science fiction was firmly ensconced as an admittedly vague marketing category with a sizable oeuvre accumulated: between Wilson’s declaration of Richard Horne’s The Poor Artist as the first science fiction story[3] and the end of the century at least one major science fiction story or novel was published in English – with significant bumps around the publication of The Battle of Dorking and The Coming Race in the early 1870s, followed by a steady increase through to the end of the century with the popularity of Verne, Wells, and their imitators.

Gernsback was a great enthusiast of the promise of a scientific future. He was both an inventor and a writer of “extravagant fiction” and frequently graced the pages of his own magazine The Electrical Experimenter not only with factual articles and editorials but with his own creative work.  In one of his essays here in 1916, he urged his readers to take up their pens and produce their own “extravagant fiction” – brushing off the term science fiction when he was at it.

When Gernsback came fresh from rescuing the emerging amateur radio community from being regulated out of existence to try the same trick with science in 1926, he brought the term science fiction with him, and his own variant – scientifiction.

Again, the term didn’t really catch on outside the minuscule fandom[4], but some of the ideas did: notably the concept that the place of science fiction was as a vehicle for teaching science and breeding enthusiasm for the future. These utopian concepts were snagged by the Futurians – a group of authors and critics (but mostly fans – the oldest of the first Futurians was in his early 20s at the time) who wanted the science fiction community to join them in building the inevitable scientific-socialist utopia of the future.

Needless to say, they got short shrift[5] from fandom in general, but the ideas had legs and they got built into the emerging “hard science fiction” (no lets not rehash that argument please) market that was emerging with Campbell at the reins of Astounding Science Fiction and the stable of familiar names who were writing stories for him.

This is where we start to really see science fiction emerge as a term for a distinct genre, not so much because of clear differences between these stories and the other material being produced at the time (planetary romances, weird tales, science and sorcery, space opera with the Flash Gordon vibe) but as a marketing category: it was now clear that there really was a market for stories that did what Gernsback (and Wilson) wanted, and the industry – newly expanding into the fresh sales categories of inexpensive pocket-sized paperbacks – was eager to supply.

You can even see the effect if you want: Google’s ngram viewer[6] shows the curve for the frequency of the use of “science fiction” in their database of digitized texts:

None of the common terms for genre are particularly common until science fiction starts to take off in the early 1940s – it sees healthy growth right up until 1960, and then – WHAM – it explodes![7] Is it a coincidence that this explosion of awareness of “science fiction” as a category coincides with the era in which publishing was consolidating, bookstore franchises were growing, and the value of systematizing the way books were marketed was understood, the approach applied? It’s certainly not a coincidence that it coincides with Donald Wollheim’s masterful application of new printing options to both revitalize old, beloved classics and discover a bevy of amazing new authors while editor for Avon and Ace, and later with his own imprint at DAW.

It’s notable as well that this era saw a huge growth in the big publishers, and the consolidation of the industry into just a few big houses: the industrialization of the industry is what drove the classification, and at the same time it set up standards and definitions that – while they shifted over time – nevertheless restricted what could qualify as “science fiction”, and since the commercial big-business publishing model implicitly involves gatekeepers the result was that now instead of the readers inventing terms to describe and sort what they were reading, the publishers – and the book-stores – were sorting things for them and telling them what was science fiction and what was not.

This is why I am coming to think there is no such thing as science fiction – not really. Oh, there are stories that draw on science – some lightly, just hinting at technologies like a magician hints at mystic powers, some relying heavily on hard-core science and engineering to make the plot even make sense. There is a science fiction out there in the pages, but the term science fiction as we’ve come to understand it is a marketing category, not a literary genre. That’s why when you ask 10 people to define science fiction you get at least 11 answers. That’s why when you come upon old stories from the pulp era and beyond that are clearly scientific your mind sometimes stumbles on the term.

I believe in what Gernsback quaintly termed “extravagant fiction”, I believe in “scientific romances”, and in “the fairy tales of science”[8] – but science fiction?

It exists well enough, but it’s been taken over by box store librarians and the sorting algorithms of a certain online retailer. To be “science fiction” is to meet rules laid down by Campbell’s era regarding technology and rockets and hard, cold facts. But it bears remembering that – unlike other genres – “science fiction” as it is understood today is really defined in negative terms: ie a story is not science fiction if it contains X. There are obviously positive criteria as well, but many of them are common to other genres – the real dividing line is The Guardians of Not. Their demands have possessed the gatekeepers in the publishing industry so that only things that meet these specifications have much chance of getting through as “science fiction” these days.

But maybe the new era has just the right capabilities to reverse the ghettoization trend – if we have the will to apply them. You see, the big mistake is in thinking of genre as a set of boxes in which to file books. This thinking comes from the limited shelf-space of a brick and mortar store and the demands of marketing.

The truth is that we were right the first time around: genres aren’t boxes – they’re tags.

There’s nothing stopping a story from being science fiction, and fantasy, and a gumshoe detective story, and an action adventure story at the same time.

The same has happened to other streams of what was once a whole genre of course – fantasy, mystery, horror – they’ve all been relegated to strict marketing categories, and god forbid you cross these streams in a single story.

But here’s the secret: the marketing and sales giants that actually deliver the stories into our hot little hands have sold us a bill of goods. They’re not the gatekeepers – we are. The readers.

And as the masters of our own sense of genre, we get to cross the streams.

We get to decide what science fiction is and is not, and while that might well lead to as many definitions as there are readers the genre will be the richer for it. It may lead to things being both science fiction and something else, something normally shelved in a very different part of the store.

Just imagine what we might create, if only we have the courage to go beyond genre!

[1] A curious publication that wasn’t particularly successful (only 61 issues) but which combined humorous essays on topics of common interest in the middle classes (politics, philosophy, art reviews) with poetry, original fiction (particularly satire) and other material. It could be argued that Hood’s and Punch triggered the explosion of mass-market periodicals in the US in the 1860s which ultimately gave birth to the pulps – and thus to the genre we know and love!

[2] Though it’s possible he’s not the originator – the casual way in which he throws the term out in the opening paragraph suggests he felt it might be familiar to his readers – but then, this follows on his essay in chapter 9 on the poetry of science; perhaps he simply felt it was too obvious to explain.

[3] Interestingly eliding Mary Shelley’s Frankenstein – the reason for this will become clear.

[4] And it should be remembered that while organized fandom was small and new, magazines like Weird Tales and Argosy had impressive readerships with broad demographics – as demonstrated by letters sections that featured commentary from readers ranging from teenagers to grandmothers!

[5] Remember: Wollheim and Michel’s manifesto was delivered in 1937 – things were getting ugly in Russia, the Spanish Civil War was getting bad press, and the world was becoming alarmed by events in Germany. It wasn’t exactly a good time to be selling anything labelled “socialism” in the US. Of course, 1937 is also the year Ronald Reagan did the screen test that launched his career. Make of that what you will.

[6] An amusing name for the tool, given the subject matter!

[7] As an aside, I would love to know what causes the decade-long dip in the 1980s. I have my suspicions, but I’ll not air them here.

[8] Tennyson used the phrase in his poem Locksley Hall, alluding to the theories of his time, as well as hinting at the next lines where he considers the wonders of the future, and Wilson referred to it in his Little Earnest Book. John Cargill Brough used it as the title of his primer on science for children, published in 1859. But for me the phrase definitely evokes the idea of speculative fiction – both the scientific and the purely fantastic.