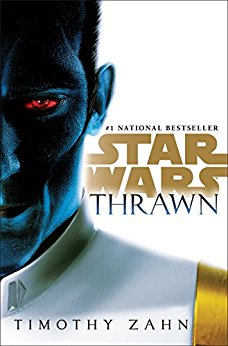 In 1991, Lucasfilm reignited interest in Star Wars with Heir to the Empire, by Timothy Zahn. This first book of the Extended Universe showcased new adventures of Han, Luke, and Leia as they struggled to keep the New Republic together years after the Battle of Endor as the threat of the Imperial remnants faded. But a new threat lurked in the Unknown Regions, marshaling the Empire’s strength for a vicious counterattack, as the last of the Empire’s Grand Admirals assumed command. A rare alien in command despite the Empire’s human prejudices, Grand Admiral Thrawn was a cunning and cultured grand strategist relying on psychology and cultural scholarship to tailor his war plans to the blind spots of his foes, ruthlessly crushing them without the need of the Force. Here was a new kind of threat to the Star Wars universe, equal in menace to the dark space wizards of the Sith.

Fans eagerly embraced Grand Admiral Thrawn, turning him into perhaps the most popular addition to Star Wars created by the Extended Universe. For fifteen years, Timothy Zahn would return again and again to Grand Admiral Thrawn, exploring his legacy and his past, and providing the linchpin to the explosion of Star Wars books. Thrawn would appear in comics, video games, and even toys.

All this was before the dark times. Before the Disney buyout of Lucasfilm.

Suddenly, Grand Admiral Thrawn, like the rest of the Extended Universe, was packed away and shelved, cleared away so that Disney would have a clean slate for new stories and new directions. Such as the television series Rebels. Keen-eyed watchers began to notice references to the Extended Universe. At first deemed little more than fanservice, these references began to build as the creators incorporated more into Rebels, until, in 2017, Grand Admiral Thrawn returned, first in Rebels, and then in Star Wars: Thrawn, by Timothy Zahn.

With Thrawn’s fate yet to be revealed (at the time of writing, the series finale of Rebels is still days away), Zahn is left to explore his past. And in the current fashion, that means an origin story. From the first contact the Empire made with an exiled alien running roughshod over their patrols, Thrawn covers the rise of Thrawn from Imperial recruit to a fleet admiral days away from his duty station at Lothal–and his first appearance in Rebels. Along with his aide Eli Vanto, a supply officer turned translator, Thrawn maneuvers his way through the unfamiliar Imperial procedures and prejudices, frustrating his supervisors even as he takes an impressive toll on local piracy and rebellion. After disrupting a particularly artful heist, Thrawn learns of the Nightswan, a shadowy planner at the heart of many of the uprisings and gangs Thrawn has put down. Nightswan will be a constant distraction throughout Thrawn’s career, sowing unrest and corruption across the galaxy. He might not be the genius strategist that Thrawn is, but no one else has stymied Thrawn for as long. It’s fun watching Thrawn play out his strategies, never knowing what detail in Vanto’s narration may shroud the closing jaws of the trap.

Unfortunately, there’s a second origin story interspersed with Thrawn’s, that of the future planetary governor of Lothal, Ahrinda Pryce. Like Thrawn, she will be an antagonist in Rebels. Where Thrawn is motivated by power and duty, it is power and revenge that propels Pryce through the Imperial ranks. However, Pryce is never interesting enough to care about the contrast. Part of this is because Thrawn shines far brighter than all but the Emperor on the page. At the same time, she is hampered by the focus in all Rebels prequels, such as Star Wars: A New Dawn. Star Wars novels have traditionally been written on a heroic scale, larger than life. That scruffy looking nerf herder skulking at the back of a scene usually has a story just as grand as the main characters. The Rebels novels, on the other hand, focus on a more intimate, personal level, on people who would otherwise be the faceless masses. There is still heroism and treachery at this scale, unlike in literary realism, just life-sized instead of larger than life. Like most of the Rebels novels, these stories make for compelling science fiction, but are hurt by the heroic expectations of the Star Wars label. Pryce’s journey from exploited businesswoman to exploiting governor pales in comparison to Thrawn’s journey, but then again, so does everything else.

Managing expectation is a challenge when reading Thrawn, especially for Star Wars fans, as nostalgia can overshadow the new. In Heir to the Empire, Thrawn is at the height of his powers, able to navigate the political waters as adroitly as in military matters. Here, he’s still adjusting to the alien culture of the Empire, and has a blind spot to political machinations. Thrawn learns quickly, once the rules of interpersonal engagement are made clear to him. It’s an odd flaw for a strategist who can analyze the art of a species for clues to rout it on the battlefield. Then again, even a genius has to develop his talents. For some, this discrepancy between the two versions can be jarring, but Zahn manages to convey the growth of Thrawn’s skill in a natural progression. After all, it is judgement that turns knowledge into wisdom, and Thrawn in Heir has decades over Disney’s version. And the familiar trappings of the character, from the art collection, the Chimera, and his assassins, are yet to come. For Zahn keeps the broad stokes of Thrawn’s life from the Extended Universe, such as his exile and his mysterious involvement in the Clone Wars, and reworks them to the new continuity of Disney. And he avoids the nostalgia for nostalgia’s sake pandering of The Force Awakens.

Much has been made recently of the missteps of Disney’s Star Wars, both on the silver screen and the Kindle. Timothy Zahn’s Thrawn is not one of them. The book is a little bit of fanservice for Extended Universe fans, an introduction to the villain of the second half of Rebels, and a welcome addition to the growing shelf of science fiction novels featuring the strategist instead of the captain.