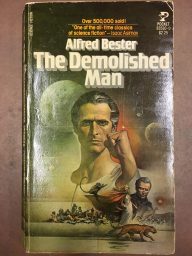 Tension, apprehension, and dissension have begun . . .

Alfred Bester may have had a touch of psionic ability himself.  The Demolished Man reads like equal parts hardboiled noir and cyberpunk.  It’s tense and taut throughout, if it never quite matches its own ambitions.  But unlike many writers who set their sights high, Bester never stumbles at the lower orders of storytelling.  It’s a damned fun story of two men engaged in combat, each trying to destroy the other.

Squared off are Lincoln Powell, Prefect of the Police Psychotic Division and 1st Class Esper, and Ben Reich, the scion of the Monarch Utilities and Resources commercial empire and a man who would be equally at home as the hero or the villain in an Ayn Rand novel.  There are many minor characters, but the plot is entirely driven by the cat-and-mouse game between Powell and Reich.  Reich plans the perfect crime—the only kind you dare contemplate in the world of The Demolished Man—to kill his rival in commerce, and Powell is the only man who can bring him to justice.  Powell’s ace in the hole?  That part about being a 1st Class Esper, or telepath.

Telepathy is an accepted part of society and integrated into the economy (my enduring pet peeve about the superhero genre is that there hardly ever seems to be any real effect on the economy).  Telepaths, formally known as Espers and informally as peepers, remain exceptionally rare.  There are only 100,000 3rd Class Espers in the world (Reich’s company alone employs over 500).  “An Esper 3 can peep the conscious level of a mind.”  There are just 10,000 2nd Class Espers.  2nds “can penetrate beneath the conscious level of the mind to the preconscious.  Most 2nds are in the professional class . . . physicians, lawyers, engineers, educators, economists, architects, and so on.”  1st Class Espers?  There are fewer than 1,000 1st Class Espers in the world.  “The 1sts are capable of deep peeping, through the conscious and preconscious layers down to the unconscious . . . the lowest levels of the mind.”  A first-class Esper can command a 1,000 credits per hour.  Which would have them living at least as well as a $1000/hour lawyer if they didn’t have to turn 95% of it over to the Esper Guild.

One can nitpick over the details of the futurology of course.  All flying cars and no tiny handheld computers.  Although I suppose Espers make such things less valuable.  Prefect Powell need not be tied to his desk.  “He does not have files, memoranda, notes, and reels of red tape.  He has three Esper secretaries, memory wizards all, who carry within their minds the minutiae of his business.”

In the world of The Demolished Man, the solar system has been settled and we have flying cars, but the worldbuilding is pretty light.  That is, outside of Espers themselves.  Bester draws of rich Esper society.  Like I said, I love how he gave serious thought to how they would integrate into the economy.  Bester is also wonderfully evocative in showing us how Espers see the world.  Here’s how Powell thinks it when his girl enters the room.  “She came into the kitchen, a short girl physically, but tall and swaying in thought; a dark girl exteriorly, but frost white in pattern.  Almost a nun in white, despite the swarthy texture of externals; but the mind is the reality.  You are what you think.”  Telepathy fundamentally changes how Espers communicate with each other.  They don’t converse like other people.  It’s more like how people think, or talk via instant messenger. 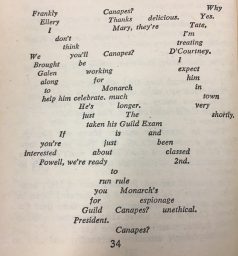 It’s, to be honest, almost off-putting.  Thankfully there isn’t too much of it.  But there are a bunch of little touches.  The Esper Guild wields enormous power in the world and absolute power over their members.  After all, they can order a fate worse than death for Espers—osctracism.  It would be like having to give up your smartphone.  The Espers are both human and meta-human.  They mask it well, but there is no group who just wants to be human.  They either want to rule man or extend their gifts to all humanity. 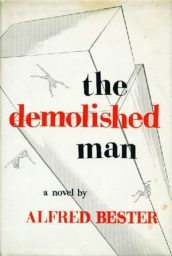 Bester, though, is primarily concerned with the effect of telepathy on crime and law enforcement.  As the story opens, there has be no successful premeditated murder in 79 years (anywhere in the world, apparently).  You can’t conceal the intent beforehand, and you certainly can’t conceal your guilt afterward.  That doesn’t stop Ben Reich from thinking he can beat the system.

It’s somewhat refreshing to see that Esper evidence isn’t admissible in court.  And with a computer D.A., it’s a just-the-fact-ma’am system (which also allows for what has to be the greatest Rule in Shelley’s Case joke in all of literature).  It’s a product of the 1950s—the Dragnet era, when we had more faith in police, and less in criminals.  The Demolished Man shows a commitment to due process that would later lead the Warren Court to, with good intentions, a revisionist view of several Amendments from the Bill of Rights that would rather screw things up.  By the time Joe Haldeman wrote The Forever War in 1974, the major Warren Court criminal procedure decisions were in the books and the crime rate had been rising for a solid decade.  In The Demolished Man, mind-reading is used for investigation and can’t be used as evidence in court; in The Forever War, potential criminals are reprogrammed as children.

(I’m not so sure of the assertion that, were the police to only know the killer, they would always be able to uncover objective evidence of guilt.  Especially since the forensic technology they’re working with is closer to the 1950s than to the 2010s.)

Of course, that the prefect is a peeper doesn’t mean the entire Esper Guild will be on the case.  Mind-reading doesn’t just come in handy for police, as Powell’s discussion with Reich’s attorney shows:

“Don’t pull at my heart strings like that, Linc.  This is the first Triple-A Felony in over seventy years.  I’ve got my career to watch.  This can make me.”

“I’ve got my own career to watch, Jo.  If my department doesn’t crack this, it can break me.”

“Then it’s every peeper for himself.  Here’s thinking at you, Linc.” 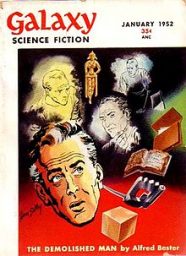 What a wonderful snippet of dialogue!  There’s the callback to Casablanca.  There’s the ever-present chummy relationship between peepers.  And there’s two sides, looking over the thin blue line at each other, knowing that it must end in triumph for one and ignominious defeat for the other.

Reich’s efforts and all the talk about revealing intent or guilt doesn’t amount to much.  Powell doesn’t need much effort to finger Reich.  But only then does the real fun begin, as foreshadowed by the above dialogue.

It takes place over a week.  Seven days.  A chapter.  Eleven-fricking-pages!  A modern novel would have burned through a hundred, if not a few.  Alfred Bester writes perhaps the finest cat-and-mouse game ever writ and does it in the amount of page space lesser authors take for a day of travel.  The entire thing hurtles along, thrust, parry, and riposte.  “Seven Days of combat.  One week of action and reaction, attack and defense, all fought on the surface while deep below the agitated waters Powell and Augustus Tate[1] swam and circled like silent sharks awaiting the onset of the real war.”  It’s a master class in writing, in storytelling.  If I have any criticism, it’s that, like the entirety of the car crash scene from The World According to Garp, it’s so good it detracts from the rest of the book in comparison.

The Demolished Man, telepathy aside, is at its heart an inverted detective story, ratcheting up the tension as Powell tightens the noose around Reich and Reich reacts in increasingly unexpected and erratic ways.

[1] Tate being a high-level peeper recruited to the Reich cause.