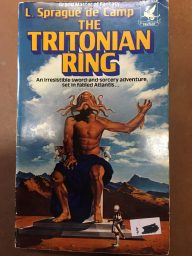 I’m not typically a big fan of the meddling, minor gods trope.  It’s theologically incoherent and usually makes for nonsensical worldbuilding.  Neil Gaiman’s highly overrated American Gods is the worst offender.  Ken Liu does a bit better in The Grace of Kings and The Wall of Storms.  The Tritonian Ring works better, perhaps because it’s got a Clash of the Titans (the 1981 version, the good one) vibe going for it.  Gods who, like the gods from Hercules: The Legendary Journeys, “were petty and cruel, and they plagued mankind with suffering.”  Only they’re way more over the top than anything we’ve ever seen on film.

Long story short, they decide our hero Vakar, a Prince of Lorsk, is the threat and begin meddling to cause his demise.  That, among other things, means an invasion by the Gorgons (not a coincidence, that name), who, among other things, defile the natural order of things by fighting in formation.  (Vakar approves of this, as he approves of other modern blasphemies such as writing and riding horses.)  The king’s magician consults a familiar, who tells them to “Send Prince Vakar to seek the thing the gods fear.”  So we have a McGuffin quest!  They just need to figure out what the heck the McGuffin is.

And so Vakar is off on his adventures.  My copy of The Tritonian Ring is a skinny 212 pages, and Vakar blows through about two dozen kingdoms in that span.  de Camp doesn’t screw around with the plot.  de Camp ties myth in with pre-history, and apparently has a reputation for knowing his bronze age better than Howard.  But as he himself admits, “[t]he story has nothing to do with my serious opinions on such subjects as lost continents, human prehistory, and the origins of civilization.”  Who needs a serious consideration of the possibility of Amazon societies when you can instead turn it into a fantasy version of The War of the Roses movie?  This is pre-history, but there are plenty of recognizable allusions.  Lorsk is on the island continent of Pusad, obviously Atlantis.  We eventually learn the reason why the Gorgon name lived on after their society perished.  That and entirely fantastical fare, from conniving and sinister sorcerers to giant crabs and snake statues that may or may not be statues.  de Camp isn’t embarrassed in the least to be writing sword and sorcery.

It’s all old-fashioned pulpy fun, if Prince Vakar is rather more modern.  Prince Vakar, you see, is a likeable jerk.  And not of the “charismatic petty villain” variety, but rather a basically decent human being limited by both the nasty, brutish, and short nature of his world and his own flaws.  Mostly a smart mouth.  Enough of the deadpan snarker to appeal to modern readers, but more rooted in a hot temper and manful pride.  Forward-thinking but rooted in his time (nothing more progressive than horses over chariots).  He handy enough with the sword but survives primarily through a combination of superior armament, dumb luck, and quick thinking (and quicker feet).

He meets his match in Queen Porfia.  When Vakar first meets her (technically, their second meeting, but the first on-page), Porfia is in no need of saving.  She is politically savvy, relatively secure in her throne, and sexually aware, if the three are all pressured in some way by the political need for a husband or permanent consort.  She does shortly come in need of saving, but only because Vakar pulls her within the circle of his own troubles.

It is, as I said, a McGuffin quest, but even in 1951 de Camp was playing with the tropes.  Even after Vakar determines what the McGuffin actually is he and de Camp throw in another twist.  And I found the final revelation around the McGuffin entirely effective.  The McGuffin actually matters.  And how so is rooted in existing myth and canon while still being interesting and different.  The Tritonian Ring is a book that takes storytelling seriously without taking itself seriously.  For a quick, pulpy read, de Camp brings it to an enormously satisfying close.  There is romance, happy endings, and just desserts, if not always in the way that we or the characters expect.

H.P. is an academic, attorney, and author (well, blogger) who will read and write about anything interesting he finds in the used bookstore wherever he happens to be for the moment.  He can be found on Twitter @tuesdayreviews and at Every Day Should Be Tuesday.