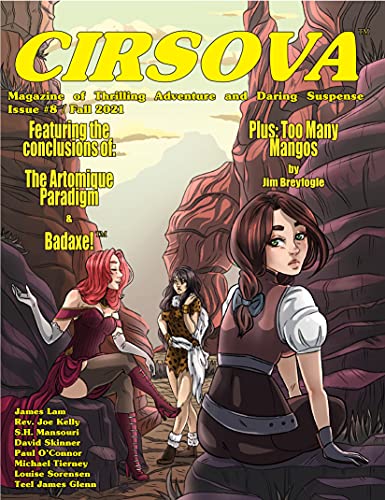 With the turning of the leaves comes Cirsova’s Fall edition. And while this issue is packed with the conclusions to the audacious space opera “The Artomique Paradigm” and the grisly axe and sorcery comic “Badaxe”, and the short stories are filled with evil rains, black skulls, and Chinese mummies, sword and sorcery duo the Mongoose and the Meerkat return once again with a new take on an old conundrum.

Mangos is the Mongoose, a skilled, boastful, and hotheaded swordsman, while Kat is the Meerkat, a beautiful yet mysterious woman who favors the oblique approach to her well-chosen blade. Together, they’ll take on any job to keep their purses full and their cups overflowing. Their latest job, however, sends them into the frigid north to retrieve a magical artifact for their employer. Along the way, they are pursued by foes–including one that is the spitting image of Mangos. When the Mongoose and the Meerkat are separated, how can Kat determine which Mongoose is the real Mangos?

Between the imaginative scenarios and exotic locations, Jim Breyfogle’s Mongoose and Meerkat stories tend to be my first read in any new issue of Cirsova. And, while “Too Many Mangos” delivers these staples, there is an extra spice to this issue’s tale. At the beginning of each of the Mongoose and Meerkat’s tales is a little chronological note: “X Months after the fall of Alness.” Up to this point, the fall of Alness has not left a visible mark on their adventures–even when the duo passes through the city on their way to the frozen North. But Mangos stumbles across a group of Alnessi refugees, whose tales begin to unravel the mysteries around such a pivotal event. And the environment itself underlies the terror the refugees faced–from fire and sword to ice and teeth.

But the frozen graveyard will be home to another body, as Kat must choose the right Mangos from a pair of identical men claiming to be the same man. How Kat does so is a bit convoluted, but well-planned, as we’ve come to expect from the Meerkat. While blood does spill in many of the Mongoose and Meerkat’s adventures, the constant return to cunning and logic to guide the sword gives a depth to their conflicts–and a variety to the resolutions. The combination of a dispassionate chessmaster and a hot-headed adventurer works wonders, both in compliment and contrast. But for those who lust for action, Mangos does not disappoint. Mangos displays that he has absorbed Kat’s cunning in a nice set piece that relies as much on exploiting terrain and footing as it does Mangos’s swordslinging skills.

Currently, there are about 18 stories planned for the Mongoose and Meerkat, with “Too Many Mangos” roughly at the midpoint of that run. It has been a pleasure to see the trust and easy banter develop between the two title characters. Now that the mysteries hinted in the first tales are being developed, the tales of the Mongoose and the Meerkat are getting even better with each new issue of Cirsova.