Tower of the Bear, Heart of Winter, and Eden 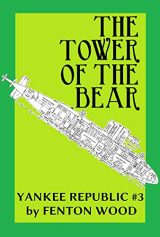 Fenton Wood’s Yankee Republic series returns in Tower of the Bear, sending radio engineer Philo Hergenschmidt into the depths of the sea, across the amber waves of grain, and into legends half-remembered to search for the secrets of an impossible metal alloy.

Tower of the Bear continues to create a world where all the legends and tall tales of Philo’s boyhood are not only true, but even stranger than he previously imagined. Science fiction typically pays lip service to the much vaunted sense of wonder, but Philo breathes it in with every page, whether racing Russians to the bottom of the Arctic Sea with Captain Nemo, delving the secrets of a Library of Everything, or following in an exiled tyrant’s footsteps into the Indian Nations of the West. Yet Philo–and the whole of the Yankee Republic series–deftly navigates the opposing demands of wonder and practicality, and his hard-won radio skills only add to the grandeur of the legends he walks among in an America that never was–but should have been. 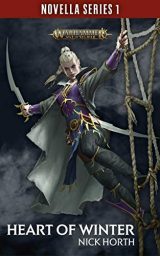 In Nick Horth’s novella, Heart of Winter, aelven corsair Arika Zenthe’s unsuccessful bid to kill her pirate king father places her as his pawn instead. Now she must find the Heart of Winter, an ancient magical artifact with the power to destroy cities, before the poison in her veins kills her, knowing full well that if she succeeds, her father will sacrifice her to extend his life by centuries.

Heart of Winter is a Warhammer novella set in the Age of Sigmar campaign. Like most media tie-in fiction, it is a serviceable example of its genre, in this case a rogue’s form of heroic fantasy. It also means that the stories cannot rock the boat of the greater setting, which denies Arika of the permanent and satisfying end of a final confrontation with her father. However, what sets Heart of Winter ahead of its pack of ten Warhammer novellas is the imaginative beginning where a fleet of pirates attempt to storm the pirate king’s flagship. This terror of the seas is built on, around, and in the sides of a leviathan, and the action does not shy away from using the organic setting of the monster’s hide, mouth, and viscera without resorting to gore porn. 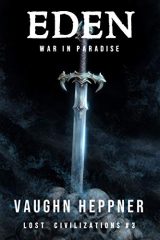 Vaughn Heppner’s Eden closes out the first trilogy of the Lost Civilizations series with holy warrior Joash trying to escape from Nephilim captivity. But the crafty sons of fallen angels trick him instead into helping him find the last relic from Heaven on Earth, believed to be the only way the giants can defeat the angel guarding Eden. Meanwhile, the Elonite armies, led by the Seraph Lord Uriah, pursue the Nephilim in a desperate attempt to keep the brutal giants from eating from the Tree of Life and proclaiming themselves as gods over the Earth.

Not every test a hero faces is one of strength or arms. Here, Joash’s wits, endurance, and will are tested, first by the Nephilim captors, and then again by the purifying aura of Heaven radiated by the relic. Even though the clashes of wits and philosophy between Joash and the might makes right beliefs of the Nephilim occasionally–and uncharacteristically–grow tin-eared, Joash’s feats of endurance rival those found in classic sword and sorcery. Heppner never undermines the verisimilitude of the pre-Flood era with modern detatchment or judgements. But strength of arms is not neglected either. The Elonites and the Nephilim clash in a battle worthy of song. And throughout all is woven the legend of the zealous Elonite Lod, dread foe to the sons of the fallen angels. For the fight for Eden is but one cataclysm that might befall the pre-Flood world, and Lod marches to prevent the next.