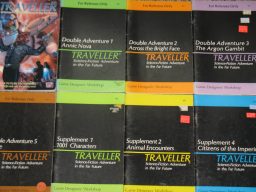 Traveller was created and conceived before blockbuster space movies. It’s a product of the ethos running through a great many science fiction novels from the fifties and sixties, so things just don’t play out like what you see in Star Wars, Battlestar Galactica, and Star Trek II. A High Guard fleet battle will run for days as the titanic battlecruisers slowly grind each other down. And the small ship engagements depicted in Mayday and the original Starships booklet…? They’re something else entirely.

Everything comes down to the cold logic of the vector mathematics. There a no fancy maneuvers that can turn things around in a dramatic way. If someone’s gunning for you as you attempt to make it to the safe jumping distance, there’s nothing else you can do except shoot back and hope you make it. For someone expecting Star Fleet Battles or The Last Starfighter… this is going to be especially excruciating.

Just as an example, in our last session the lone survivor of the planet of the Space Amazons showed up banging on the doors of my scout ship. She blamed us for the destruction of her star system and demanded satisfaction. Sky Hernstrom uses his shotgun to persuade her to leave us alone, but things weren’t over. When we were heading off to the jump point, she was suddenly on our tail, weapons hot.

Rulings were required to set up the engagement. The referee decided that she was camping out on the route heading straight out of the starport. When we refueled from the ocean instead of buying refined fuel, that gave us a lead of 600 mm, ie 60,000 kilometers or the distance 1G of thrust will take you if you coast for six turns.

The game stopped as we calculated that it would take something like 25 turns to reach the one hundred diameter limit of the planet. That would be a LOT of combat rounds! The next big rules question was what would happen if a ship flew through a sand counter. (There was a cryptic comment in the first edition rule book indicating that it would damage the ship, so our referee ruled that a ship could spend a G of thrust going around it or else take a damage roll from the standard hit table.) When the Amazon girl fired a missile at us, the game paused again as we dug through the rules to confirm that you have to have Return Fire in order to get to fire your lasers in the return fire phase and anti-missile in order to get a chance to shoot down missiles that have made contact with your ship.

In a set up like this, there’s really not much you can do except hope the dice go your way. Given that the Amazon had a turret sporting a laser and a missile going up against my laser and sandcaster combination, things did not look good for the native team!

Turn one we had matching vectors. Amazon girl scored a hull hit immediately and our ship depresurized. (Fortunately, Neal Durando had insisted that we get in vacc suits as soon as the trouble started.) I might have hit the missile with my laser… then I dropped sand and punched the accelerator.

Turn two the sand did it’s job making sure nobody hit anything. Of course, the sand also made sure I couldn’t hit the missile coming my way, either! Not sure how to pace everything, the Amazon girl held back her missile shot and I held back my sand canister.

Turn three there was more useless laser fire due to the sand clouds while the Amazon girl fired another missile. The referee had mercy on us by ruling that the missile somehow couldn’t maneuver around the two sand clouds without hitting one and it blew up. (Nobody argued with this for some reason.)

Turn four the Amazon girl hit the brakes to avoid taking a hit from the sand cloud. This difference in velocity would allow me to gradually pull away. (A significant lead would give her not just a penalty on her laser to-hit rolls… but also give me more chances to shoot down her missiles.)

By turn seven, our distance had increased to 21… with a velocity difference of 5. (Every time she went around a sand cloud, that distance was just going start to go up faster.) She missed every single laser shot once that sand was in play. One missile got through to me and I finally had to take my lumps: 1d6 hits. The referee got three… all of which punched up my hull to the point where the ship looked like a piece of Swiss cheese.

I fired back at her and rolled an eleven– just enough to get through my own sand clouds. Her hull was hit and her ship depressurized… and then her ship stopped firing and accelerating.

What do you do then? Do you go back and salvage her ship and make millions…? Or was this a ruse to get us to stop fleeing…? No idea!

At any rate, a lucky hit on a computer or maneuver drive would have changed everything. That makes every damage roll in these exchanges a major event. But it’s really hard to score a hit. The distances are long. (We were 1600 mm apart at the end– 160,000 kilometers distant. That’s more than half way to the moon!)

Most importantly, the combat took two hours of game time.

That would never work for a movie. Ships lashing out at each other at distances where they can’t see each other for hours on end…? No, that’s crazy. But in a role-playing game…? That leaves plenty of time to role-play negotiations over comms, time for player characters to attempt damage control, and time for everyone to come up with crazy ideas that are just outside the scope of the rules.

Most importantly, the odds a player character’s ship simply blowing up are not that good. That’s a really good thing where such an event would result in an hour or two of unplanned character generation!